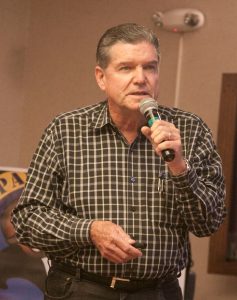 Gramps was delighted to have Pat Macha return to tell us more about aviation errors that resulted in crashes and the crash sites. It was especially delightful to have him introduced by our OPS Cynthia Macha, Pat’s sister.

Pat’s interest in aviation archeology began during a trek in the mountains helping the Park Rangers when he came across a wrecked airplane, a C-47B. It had not been seen for many years and Pat found it by traveling a route that was not commonly used. The crash occurred in December of 1952 and had been painted with yellow “X” markings so that it would not be mistaken for a fresh crash. Thirteen people were killed and a rescue  helicopter had also crashed with two aboard. High winds and a snowstorm caused the crash. Pat reached the site in the summer of 1963 before any trails had been cut on this region of 11,000 foot high Mount San Gorgonio. He found the parachutes and equipment of those who had perished still on the ground at the site. The aircraft was unburned. He sat on a large boulder for 30 minutes, stunned by what he saw. This was the beginning of his fascination and passion for aircraft wreck sites. He has been searching, exploring, documenting, preserving, investigating, writing books and presenting shows of these crashes ever since.

His presentation to Gramps this time included a new picture presentation and an emphasis on the judgement errors that caused almost all of the crashes presented. All the facts of each site were evaluated and the cause of each crash was analyzed. For us pilots it was quite disturbing to realize how many judgement errors alone had caused so many crashes and deaths.

One of the most fascinating crashes was the crash of a C-53 that left Van Nuys in marginal weather for the purpose of towing a Waco to Victorville over the mountains. The glider pulled the tail off the C-53 over Castaic. The glider crew bailed out and the C-53 crew made a hard landing. The wreck was found by a nine year old girl, Mary Lyn Winkler, who lived in the area. She was much appreciated and received personal thanks from General Hap Arnold. 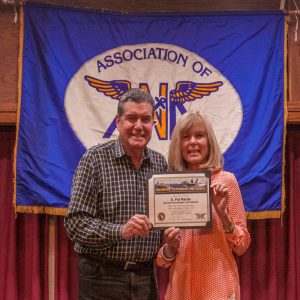 Gramps; Cindy Macha thanks her brother Pat
for his second time as a Gramps ‘ speaker.

Another interesting crash was that of a Beech Bonanza en route to Las Vegas with $50,000 in cash aboard. Only $ 1 9 , 0 0 0 was recovered? Along these lines, in the past airmail flight crews were required to stay with the crashed aircraft to protect the mail cargo from such loss.

We are once again delighted to have Pat present his findings to us and give us the analysis of these crashes. Pat’s books are also fascinating reading with extensive detail of each crash site. The approach to the judgmental cause of these crashes was especially fascinating. We look forward to seeing him in the future