Action Taken: Logistics at Sea – Keeping the Fleet Afloat (“The jets don’t fly until the oiler comes by!”) 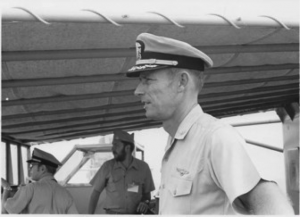 Lieutenants study tactics, but Admirals study logistics.  Nowhere is this axiom of the warfighter more true than in the process of keeping ships and aircraft fueled and supplied during long sea deployments.  No battle group deploys without at least one “Oiler,” the ship that carries the vital fuel that keeps the aircraft carrier’s airplanes and its escort ships supplied with fuel.  Although modern procedures and ship configurations have evolved somewhat, the requirements are essentially the same as they have been since the end of the era of sail. The complexity of at-sea replenishment operations is a fascinating topic, which is rarely revealed to the world outside the Navy.  Now, Captain Robert B. Olds, former commanding officer of the USS Hassayampa during the Vietnam War and former GPS CO, will describe the operations and risks of maneuvering massive ships within a few yards of one another, while connected by thin cables and huge fuel lines, often in the dark of night.  It’s a very special story that few people have been privileged to hear.  Join us.