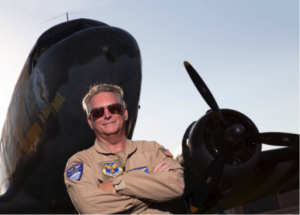 In the early morning hours of June 6, 1944, intrepid American pilots, unarmed except for the valorous American paratroopers they carried, brave the heavily defended skies of Normandy to liberate Europe from the oppressive clutches of Nazism. Steve Rose, pilot of the veteran aircraft, which actually participated in that history-making event, will be on hand as one of its devoted acolytes, to describe the perils, the challenges, and the imperative nature of that momentous mission and the 75th Anniversary reenactment.