On June 3, 2015, a few of our members traveled down to Camp Pendleton to participate in the memorial service for 4 members of HMLA-469, “Vengeance”. The following is from a web news article posted on the 3d MAW website. Family, friends and fellow service members gathered on the flight line to remember six fallen Marines from Marine Light Attack Helicopter Squadron (HMLA) 469, 3rd Marine Aircraft Wing and Marine Corps Installations Pacific, at Marine Corps Air Station Camp Pendleton, California, June 3. 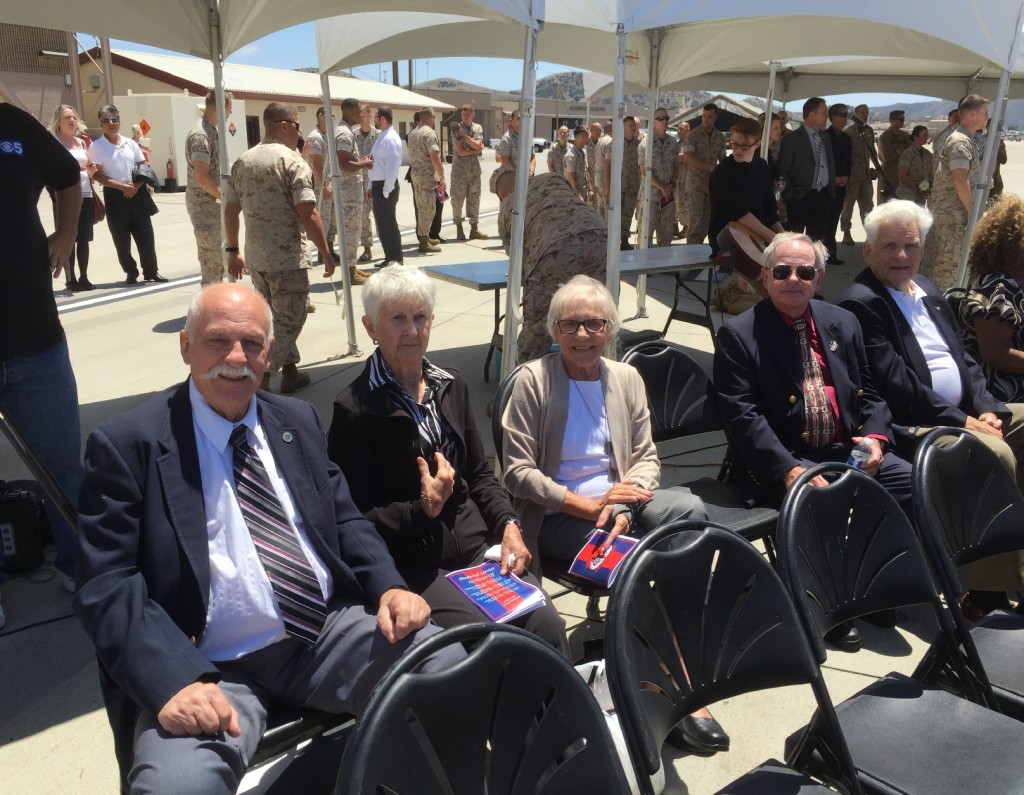 It was a somber ceremony but well-attended. See the accompanying photo that identifies our members who attended.  Colonel MIke Naylor made an excellent presentation on his experiences in the Marine Corps, moving from managing a dairy operation in civilian life to flying military aircraft for nearly 30 years. Quite a story! Unfortunately he did not have time to tell us why the V-22 Osprey” was not selected to be part of HMX-1. Switching subjects, on 9 July we will be briefed by CAPT Jerry Stoll about Soviet submarine challenges during the Cold War. Remember those days? Next month we will have SOQ Awards and LTG David Berger will brief us on activities of the 1st Marine Expeditionary Force which includes 3d Marine Air Wing.

Other recent events that I want to report to you are our attendance of an awards program at the Orange County Board of Education, and visits to Lyon Air Museum and Western Museum of Flight.

On 17 June the OC Board of Education announced the name of a local high school student who won the First Annual Jack R. Hammett Memorial Day Essay Contest Award. The student happened to be a student at the Sunburst Academy that is situated at JFTB Los Alamitos. Jack was a long time member of ANA, a Pearl Harbor Survivor, and President of the Orange County Freedom Committee among many other contributions to Orange County. Ray LeCompte and I represented GPS at the ceremony which was very positive and rewarding. That same day, 17 June, Ray and I met Vince van den Brink at Lyon Air Museum to check it out in anticipation of making it a destination on a future trip by members of GPS. It is an excellent museum. Very well managed. The building and the aircraft are immaculate. It is a very impressive collection. We met one of our members, Jim Angeley there. He is a docent at the museum. Finally, on 24 June, Ray, Vince, George Del Gaudio met Cindy Macha at the Western Museum of Flight for a tour of that facility in anticipation of a trip by members of GPS. As you know, Cindy is the Executive Director of WMOF and is our newest Staff Member, taking over as Operations Officer arranging for speakers to brief GPS at our luncheons. George is a volunteer at WMOF but we had another volunteer as our guide and driver. Besides the aircraft and materials on display onsite, WMOF has four significant aircraft on display on the “pad” which is about a mile away from the Museum. At that location they have an F-14, T-38 (NASA a/c), YF-23A and YF-17. These are very significant aircraft in the history of aviation. We had a great tour and Vince is thinking of combining WMOF with a tour of the Robinson Helicopter Company manufacturing line because it is right next door. At WMOF our tour guide wanted Ray or me to get into the seat of their F-5 for a photo opportunity. We both looked at the size of the cockpit and said no way, but that Vince should be able to fit. Here is a photo of Vince in the F-5. It was quite a month for activities. Now we turn to the month of July and our meeting on 9 July. Pleasetryyour best to attend and enjoy the company of your fellow members. Bring a guest whenever possible. Maybe you might suggest that they join ANA! And finally, just because Cindy has filled a spot on the Staff that does not mean that we are all set for volunteers. We need new blood to take over jobs that many of us have been doing for years. If you appreciate what we do, help us out by volunteering to either take over or assist us.