A busy few weeks for me. On Saturday, 22 October, a few friends and I joined thousands of people on the beach at  Huntington Beach for the inaugural Breitling Huntington Beach Air Show. Weather was perfect for Friday and Saturday. Not so good for Sunday. I will try to get a photo that shows the opening “ceremony” for the show. There were skydivers falling out of the sky and the fireboat awesome .

There were all kinds of aerobatic aircraft and even a jet assisted Waco. The highlight of the show for me was the F/A-18 flight demo. Just such a powerful airplane. The Breitling Jet Demonstration Team was very good and the Thunderbirds stole the show. Excellent display of formation flying. 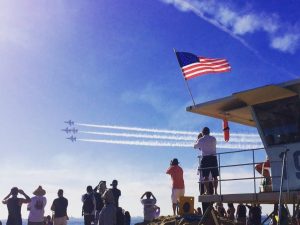 On Sunday, Ray LeCompte, Vince van den Brink and I braved the elements to attend the Wings Wheels & Rotors Expo at JFTB. Attendance was apparently down, probably because of the weather, or maybe the fact that it was the final day for the HB Air Show.

Anyway, we set up our recruiting booth and met many interesting folks and maybe recruited one or two of them. I saw Jim Angeley just as the show was about to close. Jim and I where standing over by the line were the Thunderbirds were signing autographs for the hundreds or folks who remained after the rain. I understand that the HB Air Show has two more years to run. Hopefully they can get the T-birds to come every year, if they can’t get the Blue Angels!

Remember to recruit new members whenever you get the chance.

I know that Dave Franzen is doing his best to get a couple of his buddies to join. I just found out that my daughter’s father-in-law was ship’s company of the USS Kearsarge  (CVS-33) back in the ‘60s. I am hoping to get him off of his butt to join us one of these days. And, don’t forget that we need volunteers to take over some of the staff positions. We are getting old and tired. We need new blood.