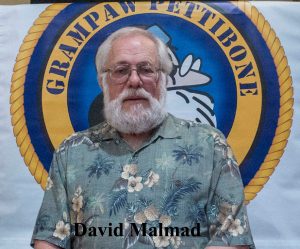 During the subject era, there were many attempts by many nations to develop weapons that could operate autonomously thus shielding human operators from the necessity of going in harm’s way. A few, however, were spectacularly successful, most of which were developed by Nazi Germany prior to and during WWII. This is a fascinating subject whose roots extend far earlier than most people had previously known.

David Malmad, Grampaw Pettibone Squadron Public Affairs Officer, joined the squadron in February 2017. Shortly after coming onboard, he was recruited and accepted the post of PAO for the squadron. David holds a Bachelor of Science in Aviation Management from Embry-Riddle Aeronautical University and an MBA from Claremont University. David retired in November 2016, after 25 years as an IT Systems Consultant specializing in Human Resource Management Systems. Prior to his consulting career, David worked nearly 15 years in the Aviation/Aerospace Industry as a safety specialist, recruiter and systems analyst. This industry experience included over 4 years working in Iran for Bell Helicopter International as a Flight Line and Ground Safety Specialist.

In addition to his professional experience, David has held a number of staff and support positions in aviation related organizations. Past activity included Civil Air Patrol for over 15 years, including staff positions as Squadron Personnel Officer and Wing IG. As a member of the Fullerton Airport Users Task Force for more than 10 years, David participated in development of the airport master plan as well as participating in hangar development and use requirements. An active member in the Commemorative Air Force since 1992, David has participated as the Personnel Officer for the squadron, compiled and created the unit library and is active in the Aircraft Marshalling program at air shows for local as well as nation-wide CAF facilities. David has presented talks on various historical records related to aviation history with particular emphasis on WWII era aircraft and events.