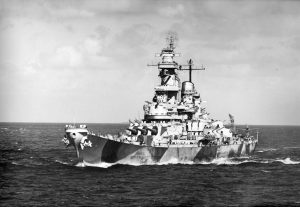 During WWII, the decks of the USS IOWA bristled with anti-aircraft (AA) guns and hundreds of sailors to man them. IOWA provided essential AA support to

the fast fleet aircraft carriers as they took the war to Japan. Joe Hughes will introduce the
three AA systems used on the IOWA, how these systems were deployed, and their effectiveness in combating the enemy threat from the skies.

Mr. Hughes retired from Northrop Grumman Corporation’s Information Systems Sector after 28 years of service in 2011. He managed naval weapon system projects early in his career and transitioned to managing larger computer network support departments and programs. Prior to joining Northrop Grumman, Mr. Hughes served in the U.S. Navy and was stationed aboard the USS Grand Canyon (AR-28) and the USS Texas (CGN-39). In addition to his duties as an Operations Specialist, Joe was a dual qualified Air Intercept Controller and an Anti-Submarine Air Control Specialist.

Since June of 2012 Mr. Hughes has been an active volunteer for the Pacific Battleship Center serving as a Tour Guide, newsletter editor and currently as the project manager for the Anti-Aircraft Aircraft (AAW) Exhibit Team. This project involves telling the story of the air war in the Pacific Theater from the battleship perspective as a part of the main body in aircraft carrier task groups in 1944 and 1945. Due to her modernization over her nearly 50 year career, Battleship IOWA is left with few weapons or artifacts from this period and so the project is focused on acquiring samples of WWII vintage AAW guns and assembling multimedia displays to tell the air combat and defense story.