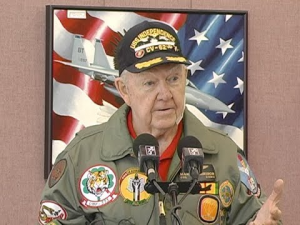 Colonel Marvin T. Garrison, USMC (Ret) (aka Marv/Marc), past Commanding Officer and Fellow of ANA Grampaw Pettibone Squadron, passed away peacefully in Irvine, California on February 14, 2018, after a long bout with cancer. Marv was born in Atlanta, Georgia on March 20, 1931, and moved to Anderson, South Carolina in 1935.  He was an Eagle Scout, earning bronze, gold, and silver palms.

Marv enlisted in the Navy in 1949 and after service as an air crewman was selected for Navy flight training.  Upon graduation he received his Wings of Gold and opted to be commissioned as a Marine Corps officer.  He primarily flew jet fighters along with many other aircraft during his 33 year career.  He received his BS from the University of Nebraska in 1960.  He had four combat tours: 2 in Korea; and 2 in Vietnam.  He was awarded a Legion of Merit and Bronze Star with Combat “V “and several Air Medals.

In civilian life, he worked for Ford Aerospace as a mission analyst. He was an avid Ducati biker and former partner in Pro Italia of Glendale.  When he retired from riding, he took up sailing and tennis.

He is survived by his son Marvin and wife Belle Garrison and grandsons: Travis (24) and David (19) Garrison.  He is also survived by his wife, Barbara Garrison, and children, Ryan and Meredith Craig [grandchildren Micaela (6) and Owen (2)]and Tara and Wayne Bradford [grandchildren Caden (14) Alexa (13) and Chanel (10)].

He will always be remembered for his wonderful disposition and positive attitude toward life.