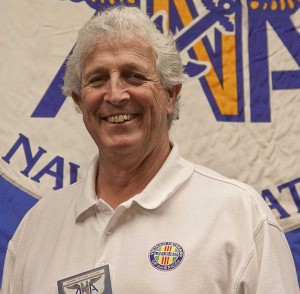 Last month we were honored to have Steve Tucker as our speaker. As a Marine pilot, Steve flew CH-46 aircraft in Vietnam during Tet of 1968, specifically, resupply missions into and out of Khe Sanh. Both Cindy and I had put the word out to our friends about Steve’s presentation. Cindy got four of her members from Western Museum of Flight to attend. See the photo attached. I, on the other hand, told Steve Cooper (a former Marine plane captain at Chu Lai in VMFA-115 in 1968-69) who is a member of VVA 756 in Long Beach about Steve Tucker’s presentation. Coop then told some other guys and guess what: the two co-founders of 756 and a member of VVA 1024 in Orange County showed up. See that photo and caption. Now, I do not know whether any of those guests will become members but at least now they know about us and I will add their names and addresses to our email list. This is how we build our membership. Bring your friends please! 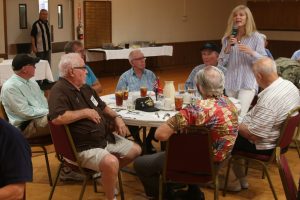 When I see you at our meeting on 13 September I will have just returned from the Tailhook Convention in Reno. Usually Ray LeCompte attends with me but he is under the weather a bit so is on the “unable to perform” list. As I usually do at Tailhook, I will look for speakers from active duty billets, authors and industry folks who can bring us current on the status of Naval Aviation or tell us good stories of things that happened in the past. I will have a list to give to Cindy upon my return. If you know authors, active duty or industry personnel who have interesting stories or information related to aviation, especially Naval Aviation, give Cindy the contact information. We need the name, telephone number and/or email address for any potential speaker. Also, please have an idea of what they might be comfortable presenting. (Attendees in the photo to the left are, from left to right:  Dale Ledbetter, Gordon “Ole” Olson (foreground), Rod Losey, Neil White, Bill Shultz (with his back to camera), Bruce Walters, Cindy Macha, and George Del Gaudio.  In the background is Howard Wingo, Manager of the Elks Lodge. 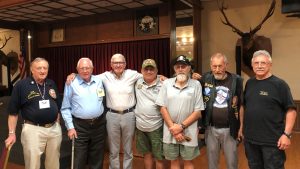 Finally, it is a few days before the services for Senator John McCain. CDR Jerry Loeb, USN (Ret.), who spoke at one of our meetings years ago wrote an open letter to the Editor of his local newspaper that I think appropriate for all of us to read. Jerry was Ensign McCain’s flight instructor at one time. The letter can be found down below. (Attendees in the photo to the left are, from left to right: Don Pageler, Del Ramsay, Steve Tucker (speaker), Conrad Gomez (CO and co-founder of 756), Max Stewart (co-founder of 756), Steve Cooper (756) Bob Harrison (1024).

To The Editor, The Desert Sun Newspaper

With permission from Jerry Loeb

I was John McCain’s flight instructor just as the undeclared war in Vietnam was throttling up. Then-Ensign John Sidney McCain, III and I were almost the same age although I was two senior ranks above him. I was assigned to train McCain since two factors were in motion. First, I had arranged for Ensign McCain to be released from a sticky civilian situation off base and secondly, I was the most likely aggressive flight instructor to see him through the formation and air-to-air gunnery phases of training. I had no idea what the future with Ensign McCain would bring. Little did I know what would lay ahead for both of us.

Before we ever got airborne for his first flight, we had a quiet meeting in the base coffee shop aka Gedunk. The fact that McCain’s father was a four star Admiral would have no bearing on his flight training with me. I had already reviewed McCain’s flight and academic records before we had our sit-down. He thanked me getting him out of the clutches of the County Sheriff the day before. I explained to Ensign McCain what he could expect from me as his designated “tutor” of sorts and what I expected from him for the next month or so. As we progressed through the training phases, we almost lost McCain during a near-collision on the landing runway. I urgently radioed McCain to land long as the other aircraft behind nearly ran him over. He missed death that morning by one throttle shove.

When then-LT McCain got shot down and was taken prisoner in an undeclared war environment, I knew that he and my other captured shipmates were going to be cruelly tortured and inhumanly denied any of their rights under the Geneva Convention. Their North Vietnam captors had no regard for any prisoner rights in an undeclared war. Rights did not exist.

A few years after McCain’s capture, his brother, Joe McCain contacted me. He was under arrest in San Francisco for demonstrating for our prisoners’ release in the Hanoi Hilton. The SFPD agreed to release Joe into my custody if he would leave San Francisco double-ASAP.  I met up with Joe McCain the next day in Washington, DC where we met with Senator Ted Kennedy several days later. I had asked Senator Kennedy to meet with us and help promote the release of our pilots from the Hanoi Hilton. The meeting with Senator Kennedy was a cruel disaster. It was an outrageous act on Kennedy’s part and I had to restrain Joe McCain from physically attacking Kennedy.

Within the hour after the debacle with Kennedy, we were trailed by two FBI men whom I invited to join us for our next meeting. They declined but followed us when I took Joe to meet with a former flight student of mine who had been released from the Hanoi Hilton in a prisoner exchange deal. My former student started to relate to us all the awful, inhumane conditions all the American pilots were undergoing. I cut that part of the conversation very short and focused on suggestions as to getting our pilots out of Hanoi. My former student and Joe McCain did not know about the Texas billionaire who was developing an extreme and bold plan to force the issue of a complete prisoner release of our pilots. I had declined to be one of the lead Naval Officers and the lead pilot in that plan.

When Senator John McCain was running in the Presidential Primary against Bush, The New York Times and the LA Times contacted me for a statement about Senator McCain et al. I told them the voters would make their decisions not the news media. Goodbye. Ditto years later in the other Presidential Election cycles as well.

With the passing of Senator John Sidney McCain, III; I remember well my farewell handshake with Ensign John McCain. “Mr. McCain, if you cannot be good be colorful.” And so it went. I will see you on the “Other Side, sir. Keep the blue on the top and check six.”