The Grampaw Pettibone Squadron was honored to have as our guest speaker, Mr. Mike Ciminera, Northrop Grumman Vice President, Retired.  Our speaker shared his knowledge and experience associated with the Grumman F-14 design evolution.   Cindy Macha, GPS Ops Officer introduced our speaker who dedicated his presentation to the creation, design, development and operation of all F-14 versions over a period of 36 years. Among those individually recognized was Rear Admiral Paul Gillcrist, who wrote the definitive history of the aircraft.

Our speaker first mentioned the Grumman Hellcat, a major contributor in response to the air war in the Pacific during WWII. Just as the Hellcat supported the US during the war, the F-14 aircraft supported the modern day requirements as an offensive tool. It was all-weather, carrier-based, airborne weapon system and capable of performing air-to-air combat and air-to-surface attack missions. It was a twin-engine, two place variable sweep wing,   supersonic fighter capable of engaging multiple targets simultaneously.

The aircraft was created in response to the Soviet threat in the 1960s. Even today, Russia is challenging the United States on every single technological level. Mike’s presentation focused on the competition, design characteristics, weapons systems and other features of the F-14 that he was aware of prior to his leaving Grumman to join Northrop. Soviet threats were demonstrated at a 1967 Russian Air show, through the flight of a Mach 3 interceptor that became the Mig-25.   The aircraft was created by the Soviets in response to the U.S. XB-70 Valkyrie, a supersonic strategic bomber, which did not go into production.   Five new aircraft were also created by the Soviets during this period. In addition to the new designs, aircraft such as the Tu-95 Bear bomber, a turboprop, first flown in 1952, is still active today.

Leading up to the F-14 was the early sweep-wing technology from Grumman. The XF-10F-1 Variable Sweep Wing Jaguar, using translating wing technology was introduced in 1947. Answering the need for higher payloads, longer range and jet aircraft with slower approach speeds led to this model. However, the number of manual control innovations coupled with a number of aerodynamic limitations led to the project termination. The technology developed from the aircraft contributed to the introduction of the Air Force F-111, Navy F-111B and later the F-14.

The F-111B was first introduced as a result of Secretary of Defense McNamara request for service commonality and USAF General Everest’s demand for an aircraft that could travel on the deck at Mach 1.2 or at altitude to penetrate Soviet Union airspace. It also had to be capable of landing or taking off from grass strips in half the distance of an F-105. Mike indicated that Grumman announced in 1966 the lack of an existing engine with the F-111 to defeat Soviet fighters. In 1968, Grumman’s redesigning of the F-111B was cancelled as it failed to meet most of the requirements except for speed.

The Navy approached Grumman for a new fighter design. Features of the competition to be known as VFX were to use successful designs from the F-111 and coupled with the Navy requirements. The requirements to enable the plane to fly as a fighter 500nm radius armed with a gun, or as a carrier launched fleet air defense 150nm radius and remain 3 hrs on station armed with six Phoenix missiles and finally to carry a weapons load for air to ground missions and fuel and be able to land on a carrier with 10,000 pounds. Mike was one of the engineers in the preliminary design. Some of the options offered were a single tail, twin tail, swept-wing as well as a fixed wing version. The fixed wing version was 5000 pounds heavier. Other companies competing were Vought and the French with a variable sweep wing and North American Aviation.

The first version design offered by Grumman was the single vertical tail configuration, 303E. The Navy determined that the design did not have enough directional stability. It was changed to contain two tails. Greater visibility from the cockpit was also required.  Air superiority was critical and lessons learned flying the F-4 against the Mig-21 in Vietnam led to design features of the nose enabling the aircraft to be a superior aircraft. Our speaker pointed out enhancements to the aircraft would occur in steps; F-14A new airframe, new engine in B model and avionics in the C were proposed. The replacement of the F-111, TF-30 engine design encountered budget issues halting the project for 13 years. There were a number of features in the design that were hoped to be kept in order for the F-14 to fulfill performance requirements. At least four designs known as ‘white rabbits’ were identified. In fact a total of seven features were approved, such as Deflected Leading Edge Slats, a feature initially proposed by the French.

Features considered critical as well as unique included the variable sweep wing design. This feature enabled aircraft to exceed Mach 2.4 in a streamline configuration. Supporting this feature is a dedicated computer with the Mach Sweep Program(MSP) monitoring the speed and attitude, to alter the wing sweep without pilot intervention, although manual override did exist. This was quadrupling redundant.   Additional capability with this feature and other control surface designs enabled for long range missions, addition of offensive weapons systems and still maintaining strike fighter capability and low speed landing approach.

Mike displayed charts comparing the F-14 features to other operational aircraft and explained how the F-14 met and exceeded many of the earlier requirements.   Features such as Automatic Wing Sweep and Wing Pivot Selection were presented in some detail. Our speaker disclosed that early designs were provided by former German engineers who had identified these same requirements for Germany during WWII. Additional detailed presentation described the functionality associated with ‘Wing Loading’. The F-14 compared to the F-4 and Mig-21 had a much lower wing loading, which enabled for faster and more maneuverable speed. Among the white rabbit features described were the ‘Maneuver Slat and Flap Turn Performance’. A maneuver slat is deployed, while the nearly full-span leading-edge slats are drooped and will be used for un-swept, low-speed combat maneuvering, giving the F-14 twice the level of maneuverability as the Mig-21. Another feature is the glove vane. Glove Vanes are a type of stabilizers for subsonic and supersonic flight. They were designed for the F-14A. They decrease air-to ground maneuver loads and enhance high speed turning performance enabling the aircraft to pull 7.5 Gs at Mach 2. Other features were leading edge flaps, spoilers for aileron control, maneuver flaps and auxiliary flaps.

Our speaker noted the significant design specification which increased the width between the twin engine nacelles, allowing for external weapons rails to be added, reducing aircraft weight and reconfiguration time to meet changing mission requirements. The navy requested testing be performed to determine aircraft response in case of asymmetric wing sweep. Testing verified in 1985 proved the design and performance of the aircraft was capable of functioning even if a wing was tested at 45 and 68 degrees. The ability to reduce weight requirements was accomplished by building the aircraft with 25% titanium by the construction of a major titanium manufacturing process. The design was proven by demonstration tests to meet Navy requirements. Additional material used in the construction was steel, aluminum and boron. The design improvements of the F-14, reduced the aircraft weight almost 10,000 pounds from the earlier F-111 aircraft. The use of lighter weight materials such as titanium and a manufacturing process using electron beam welding in addition to other features aided this reduction. Mike noted that without Grumman involvement in the F-111, many of the advances may not have been possible in the time required for the F-14 construction. 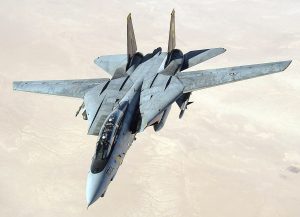 The initial engine selected for the F-14 was the TF-30, the same engine used with the F-111, with a promise of more modern, powerful engines in subsequent upgrades. This initial engine did not satisfy the design requirements for the aircraft and subsequent research indicated it was under-powered and very susceptible to stalls at high Angle of Attack (AOA). The engine upgrade selected the F-110, more than 50% increase in maximum thrust to 55,200 pounds and capable of supporting rapid throttle movement for fighter engine response.

Mike described in some detail the weapons system installed, beginning with the all-weather radar and fire-control system, AWG-9. This was accompanied by the ALR-23, an internal Infrared Search and Track sensor. The air-to-air weapon systems for the F-14 includes the PHOENIX (AIM-54A), SPARROW (A1M-7E and -7F) and SIDEWINDER (ATM -9G,-9H and -9L) missiles, and an internal gun (20mm VULCAN    M-61). The AWG-9 provided guidance for the AIM-54A Phoenix missile, normally carried in lots of four to six and capable of Mach 5 speeds reaching targets out to 120 miles. The F-14 can track up to 24 targets simultaneously and attack six targets with the Phoenix missiles while continuing to scan the airspace.  A total of seven different missile and gun configurations were presented for the F-14A aircraft. The AWG-9 is equipped with six basic radar modes.

Replacement of the F-14 engine with the P&W F401 in 1973 improved turn radius and sustained ‘g’ load. Further engine changes to the GE F101 led to a 62% increase in intercept radius and ability to take off with military power. Engine change with introduction of F110-GE-40 in 1986 reduced time to altitude climb rate by 61%. The modifications resulted in a re-designation to an F-14B in 1991.

Subsequent advances in aircraft modification introduced the F-14D with new avionics, system construction, and new engine all contributing to better fuel consumption, intercept radius, endurance and take-off at military power. All of these features enabled for a more robust weapons load that included bombs in addition to the existing missile selection. While the F-14 capability over its 36 year history fulfilled all the mission roles it was designed to answer, the fly-away cost due its operational weight far exceeds the F-18 which was selected as replacement. The F-14 was fully retired in September 2006.