The Grampaw Pettibone Squadron was honored to recognize the Navy Sailors of the Quarter at their November 2020 zoom meeting.  The online audience also enjoyed an interesting and informative presentation by the Commanding Officer of Naval Weapons Station Seal Beach, Captain Jason Sherman, USN.  The Captain was introduced by Grampaw Pettibone Squadron Commander Tim Brown.

Before Captain Sherman began his presentation about the developments and enhancements of the Naval Weapons Station, Grampaw Pettibone’s Squadron member, Captain Bob Olds related a short history of the founding and operation of the Grampaw Pettibone Squadron and the Sailor of the Quarter Award Program.  The award program began with the USS Kitty Hawk (CV-63), which was home ported at North Island.  The program continued for eight years until the ship forward deployed to Japan.  Following the Kitty Hawk relocation, the squadron looked for another local US Navy operation that had a Sailor of the Quarter program.  They selected the Seal Beach Naval Weapons Station, the last remaining naval facility in Orange County.  The program started 20 years ago with two Sailors of the Quarter awards, and has grown to six Sailors of the Quarter and two Sailors of the Year.  Over the years, the Squadron has recognized and awarded about 400 deserving sailors.   It has been a beneficial program for both the sailors and the squadron organization.  The recognition involved the attendance by the sailors at an award luncheon.  The sharing of service experience between the sailors and squadron members provided an opportunity for exchange and collective sharing of knowledge, that was appreciated by all involved.

The Sailors of the Quarter Award for the most recent period are as follows:

Captain Sherman is a helicopter pilot by training and a graduate of “The Ohio State University”.  (He acknowledged that Colonel Mark Bortnem, USMC who was a speaker at a previous Squadron meeting was a classmate of his at OSU and was recently promoted to Colonel).  The Captain provided an overview of his military flying career and command assignments prior to taking over major command beginning July 2019, in a dual hatted role as the; Installation Commanding Officer at Naval Weapons Station Seal Beach and the Commander at Naval Munitions Command Pacific – CONUS West Division.  The Munitions Command has 10 detachments and 12 different locations from Whidbey Island, Washington to Coronado, San Diego, CA.

Captain Sherman described the physical location of the Naval Weapons Station which is almost 5300 square acres with 98 magazines and almost 600,000 sq feet of Ordnance Storage.  The base did have earlier access by rail, but the tracks were dismantled when it was determined about 10 years before that it was not cost effective.  Base roads include almost 80 miles of surface supporting materials transportation.  Based on estimates from Fiscal Year 2017, the financial contribution to the local economy is about $168 million per year, provided by a base population of 520 civilian, 205 active military and nearly 800 reserve personnel.

The mission of the base is to serve the fleet concentration of San Diego.  The strategic significance of Naval Weapons Station Seal Beach cannot be overstated in relation to the Pacific Fleet.  It is the only weapons station within 1000 miles of San Diego.  The next closest facility providing the same level of service is in Washington State.

Within the Naval Munitions Command, one detachment is Seal Beach.  The facility provides ordnance for forces in the Pacific.  An additional location is in Fallbrook, which is just outside of Camp Pendleton, north east of San Diego.  The Seal Beach detachment provides ordnance loading and unloading for every surface vessel in the inventory, except a carrier and LHA/LHD.  Support is also provided for the US Coast Guard and occasional foreign flag carrying military vessels.  The Command also provides a missile department and services a couple types of major systems within the Pacific fleet. 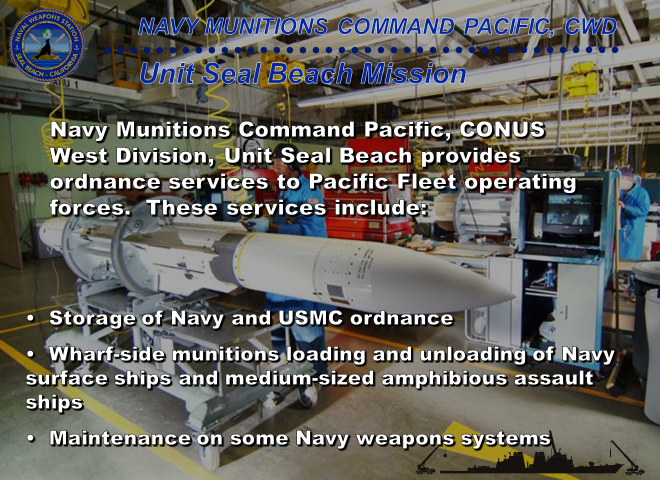 Captain Sherman explained that the base wharf has been opened since the early 1960s.  Ships typically visit the base before and after deployment and during workup cycles when entering or leaving shipyards.  The base maintains all types of air defense and cruise missiles such as Tomahawk and RAM systems.  Additionally, lightweight torpedoes such as Mark 46 and Mark 54 and an exercise mine shop are maintained by the base.  Replenishment of munitions for ships include missiles and torpedoes, to counter measures and gun ammo from 9mm to 5-inch deck guns.  Average annual value of inventory is $1.8 billion which is used to service approximately 40 ships per year.

A unique feature of the Weapons Station is the fact that it is the only installation with a National Wildlife Refuge within its fence line.  Environmental stewardship is maintained to support the wildlife that exist within the wet lands and environment.  By managing and protecting the existing wildlife population, particularly those identified as endangered species, the Weapons Station has become a breeding stronghold for a number of avian species.  Some of the land supports dry farming lease operations which serve some of the last large-scale urban farming locally, while at the same time reducing the fire hazard in the local area.

The challenge to base leadership and operational success has been impacted by the recent Covid-19 health crisis.  While the base is fully operational, much of the workforce are working remotely whenever possible.  When required to be on-base, physical contact between base population is minimized or mitigated by taking appropriate steps with protective equipment and procedures.  Visiting forces are protected, as are all base personnel, when carrying out their duties without additional risk.  The MWR (Morale, Welfare and Recreation) services are currently only available to active duty personnel as part of the health and safety control.  Base personnel are not to utilize local community services, recreational, or entertainment opportunities that would result in their interaction in settings that could expose them to non-base personnel.  This limitation will continue until a date to reopen has been set.

Even with the limitations imposed, the base still continues to fulfill its mission.  Recent operations including servicing the USS Jackson (LCS-6), a littoral combat ship, as well as servicing a foreign flag ship from Australia.   Additionally, vertical replenishment missions (VERTREP) are carried out for vessels too large to be serviced at the docks. 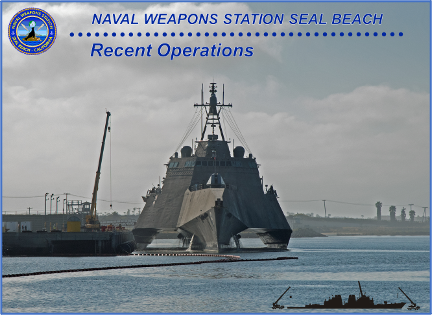 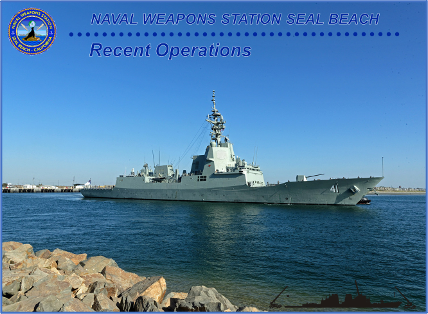 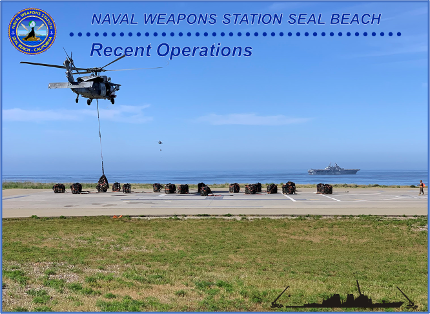 To sustain the functionality of the base, a number of projects are underway.   One project is refurbishment of 64 storage magazines that are 1940s era.  A second project is in the planning stage at Seal Beach to add a combination of Solar power and battery backup.  The plan is to sign a contract in 2021.  An additional project is underway for six missile storage magazines in various stages of construction on the north side, and the potential for an additional four in the coming years.

The Captain reviewed the project for the replacement of the Ammunition Pier.  A new 1100-foot by 125-foot pier and associated waterfront facilities will be added.  Dredging is planned to produce a larger turning basin.  The project will also include a separate small boat access channel for civilian traffic to enter and leave Huntington Harbor.

The following photos show the project as it progresses.  It began in December 2019 and is scheduled for completion in 2024. 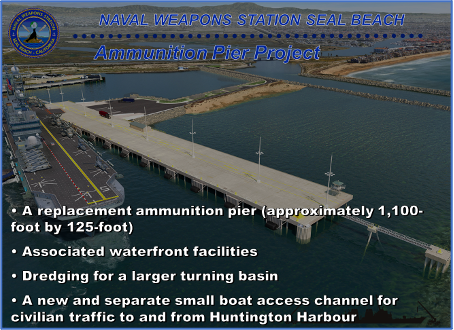 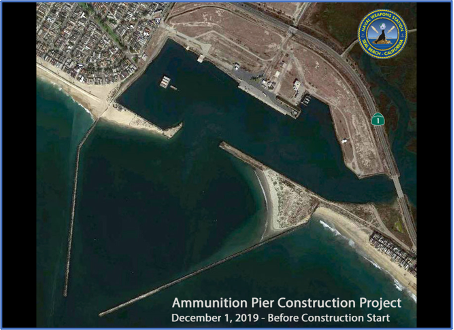 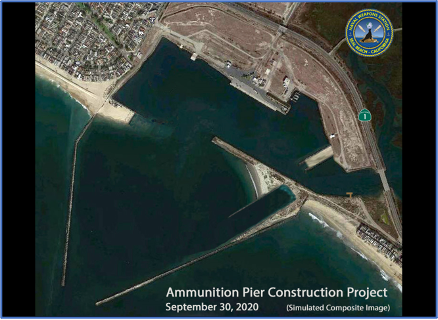 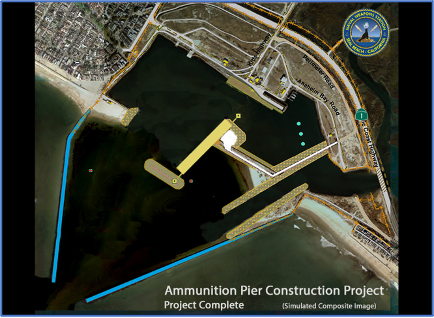 The pier project schedule is as follows

Following his presentation, the Captain answered some questions.  The first question dealt with how carriers are serviced.  Captain Sherman indicated that most carrier service is carried out through VERTREP during turn-over.  Another question inquired about the management of ship’s being serviced and possible Covid exposure.  The Captain noted that personnel from the ship during any replenishment steps are confined to the dock area for replenishment with limited access to other base personnel.   All appropriate steps are taken to manage any exposure between ship-board and base personnel.

The Naval Weapons Station Seal Beach has once again been selected as the winner of the Commander Navy Region Southwest Installation Excellence Award for Small Installations.  This is the fourth time in five years that the base has been honored.

Grampaw Pettibone Squadron wishes to thank Captain Sherman for joining us in honoring members of the station who have achieved recognition as Sailors of the Quarter.  The squadron appreciates the Captain taking time out of his busy schedule to share information regarding the weapons station infrastructure development.