At their February 2021 zoom meeting, Grampaw Pettibone Squadron and Two Block Fox Squadron hosted a presentation by Wayne R. Scott, USAF (ret).  Wayne spoke about the Joint Precision Approach and Landing System (JPALS).  He served over 29 years as a Communications and Computer Systems Officer in the United States Air Force.  After leaving the Air Force, he became a Program Manager for the Raytheon Corporation and led the US Navy’s Joint Precision Approach and Landing System (JPALS) program.  He retired from Raytheon in 2019.

Why did a retired Air Force Officer become involved with a system associated with The US Navy?

Wayne explained that his motivation was driven by his father, who had been a US Navy jet pilot, flying off aircraft carriers.  He noted that “naval aviation blood has been in his system from the start”.

Naval aviation has inherent risks and hazards and is dangerous, particularly when landing a plane on an aircraft carrier.  The following is a list of the topics for the presentation. 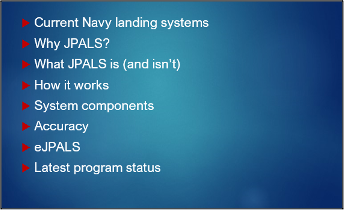 The approach and landing systems used by the Navy till the introduction of JPALS, were made up of a number of different features.  The following image provided the foundation for JPALS. 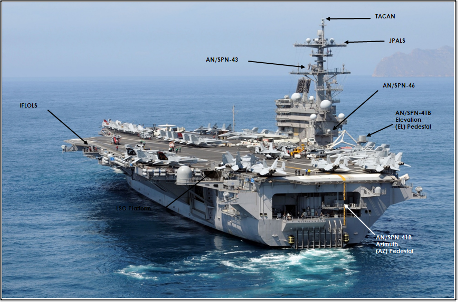 The most common is a visual approach using the pilot eyes.  This is an optical landing system (OLS) (nicknamed “meatball” or simply, “Ball”) and is used to give visual glidepath information to pilots in the terminal phase of landing on an aircraft carrier.

The onboard systems are comprised of the following: TACAN (Tactical Aid to Navigation), which provides bearing to and from the ship as well as range.  Another system comprised of two different units: one is located for elevation (EL) on a pedestal on the Starboard side of the carrier deck, and one, for azimuth(AZ) located below the deck and at the approach end, and is called the AN/SPN-41B (Spin 41), which provides signals to approaching Navy and Marine Corps aircraft.  Also, on the starboard side of the deck is the AN/SPN-46 (Spin 46), which is Precision Approach Radar, where a controller can verbally talk a pilot down to a touch-down.  Finally, the AN/SPN-43 (Spin 43), is the Navy’s marshalling air traffic control system for vectoring aircraft into final approach.

Each of the previous systems identified, provides modest accuracy and requires a strong broadcast signal to aid aircraft in locating the carrier and landing.  However, the radio frequency (RF) signal strength also poses a defensive risk during military operations and may be shut down to protect the fleet, which poses operational challenges for returning aircraft.  A system was needed to replace this older technology that had improved operational accuracy and not require a broadcast signal to aid landing aircraft.

The system to be discussed is a GPS based operation with far greater accuracy for landing aircraft.  The system is currently installed on F-35B/C, and planned for the Sting Ray unmanned tanker. This will support landing on aircraft carriers (CVN) and amphibious assault ships (LH).  JPALS can be used by a flight controller to Autoland an aircraft.  This could be employed if weather conditions, rough seas or pilot incapacity prevent a safe landing.  The goal of this program is reduced pilot work load.

A comparison of current and future systems are as follows:

A project incentive accuracy test in 2013 demonstrated that after 20 consecutive landings, touchdown accuracy was 20cm or better.  The JPALS system integrity, as described by Wayne, is noted as 99.998% reliable. 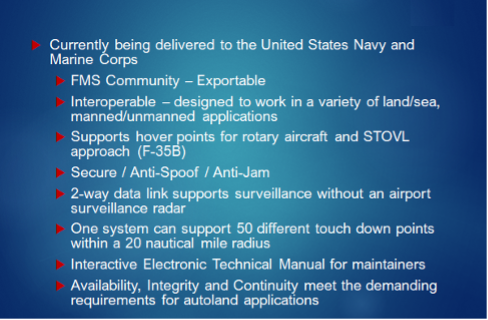 The aircraft use GPS to determine its position.

The ship broadcasts a one-way encrypted message with the ship’s position out to 200nm.

The aircraft receives the ship’s broadcast and determines range and relative bearing.

JPALS range and bearing can be integrated with existing aircraft navigation display.

Aircraft within 60 nm of ship establish two-way datalink to provide surveillance data, while no controller or pilot actions are required to establish the link.

All aircraft within 60 nm will continue to receive JPALS relative navigation broadcast.

Operations can include up to 50 touchdown points within a 20 nm radius, useful for ground-based activity.

No controller or pilot actions are required to provide data.

Data from the ship is used by aircraft to determine the ship-relative aircraft position, a commanded path (the path that ship is commanding the aircraft to fly) and aircraft deviations from that path.

Wayne described what equipment was installed on-board the aircraft carrier to support the JPALS operation:

Wayne explained that the success of such a system requires extreme accuracy under severe conditions.  Landing a plane using JPALS, a pilot must be able to place the tail-hook within a       3-foot by 3-foot box at the round-off, located 14 feet above the deck, while flying at 120 knots.  This must occur in daylight, night time, good weather or bad.  The ship can be moving along smoothly or in pitching, rolling and heavy seas.  According to Wayne, the approach path for aircraft equipped with JPALS, is not just trying to land on a carrier in poor weather conditions.     It is developed to land the plane on a 2-inch by 2-inch target on the carrier deck.

Wayne discussed the capability of utilizing the JPALS system for land-based operations.  Installing the system at a new location or one infrequently used.  The system developed is called Expeditionary JPALS or eJPALS,

The four-rack system installed on-board ship has been compartmentalized into four portable cases   without redundancy.  The accompanying GPS devices are mounted on tripods.  The entire setup can be installed and operational within 2 hours. 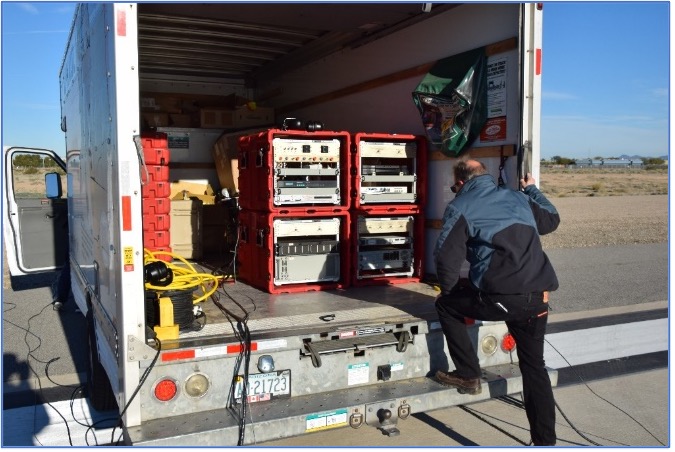 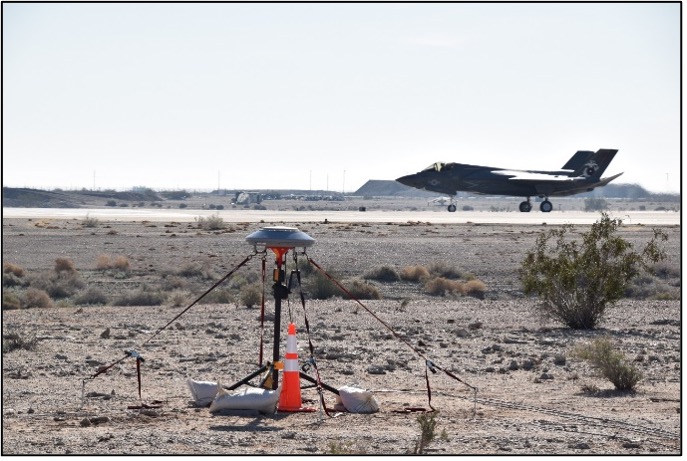 The portable system was flight tested by both experienced and new pilots and proven to be extremely accurate to a very small touchdown point on the airfield.

The initial contract was to equip fixed and rotary wing aircraft in the US Navy.  However, budget cuts in early 2000 made the program cost prohibitive.  The JPALS project only included the F-35B/C and the Stingray UAV Tanker.  Discussions are currently underway to consider adding JPALS to F-18 and V-22, due to its proven success.

Height above sea level is not a factor, since the signal is GPS based.  As long as you are in UHF radio range, you can use the system for range and bearing to the landing zone.

The system was created for all platforms and can be used on other types of ships.

There is a significant level of anti-spoof and jam resistant capability.  A newer coding structure that is more jam resistant and encrypted can be added.

Once identified and tested, the faulty part could be replaced within 30 minutes.

An existing system WAAS (Wide Area Augmentation System) using GPS is available for the civilian market.  WAAS provides service for all classes of aircraft in all phases of flight, including enroute navigation, airport departures, and airport arrivals.  It is not certified for full autoland.  The military accuracy would not be available for civilian use.

JPALS feeds the existing system.  You are flying needles and will see deviation from required path.  Once you have a view of the landing zone, you fly it visually to touch-down.  If weather conditions prevent the pilot from visually seeing the touchdown point, the system can use the Autoland feature to land the aircraft.

The aircraft will be identified on the display in the air traffic control center with a ‘J’.