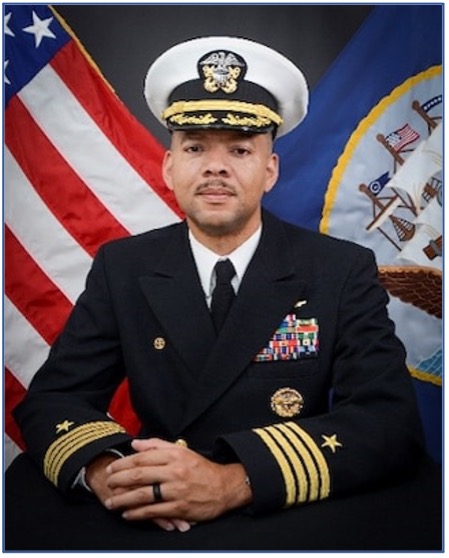 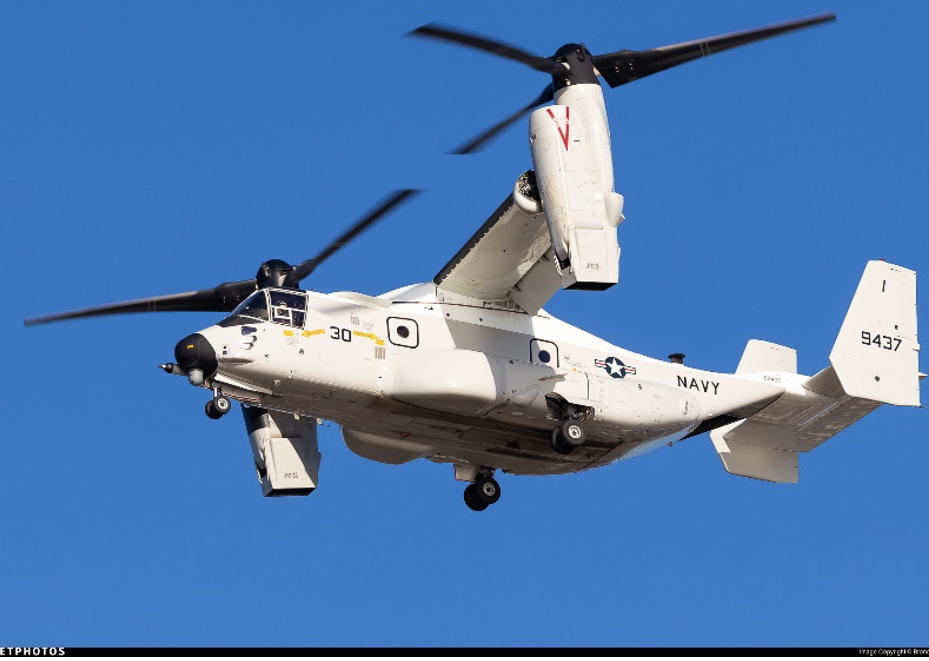 At their June 10, 2021 meeting, Grampaw Pettibone Squadron and Two Block Fox Squadron hosted a Zoom presentation with Captain Dewon “Chainsaw” Chaney who is the Commander, Fleet Logistics Multi-Mission Wing.  The Captain, spoke about the US Navy CMV-22B Osprey   tilt-rotor aircraft and its role as fleet replacement for the venerable C-2A as carrier onboard delivery (COD).

Captain Dewon Chaney was born and raised in Atlanta, Georgia.  He enlisted in the Navy in 1993 and was selected to attend the Broadened Opportunity for Officer Selection and Training (BOOST) program following basic training.  He graduated with a degree in Mathematics from Morehouse College and commissioned via the NROTC program in the summer of 1998.

Captain Chaney was designated a Naval Aviator in July 2000 after abbreviated qualification training in the H-60 and more complete training in the H-46.  His operational assignments, included a junior officer tour in Guam.  Following an assignment in DC, Captain Chaney served aboard the USS Dwight D. Eisenhower (CVN 69) as the V-2 Waist Catapult Branch Officer and V-1 Flight Deck Officer.  Subsequent to his USS Eisenhower assignment the Captain acted as department head and flew medevac in support of the US Army while deployed to Basrah, Iraq.  He then commanded the HSC-23 and the HSC-3 squadrons.

Shore and staff assignments include Flag Aide to the Chief of Naval Personnel, a tour at the Navy Personnel Command in Millington, Tennessee as the Helicopter Sea Assignments Officer, and a Pentagon tour as Military Assistant to the Assistant Secretary of Defense for International Security Affairs within the Office of the Secretary of Defense for Policy.  In October 2019, Captain Chaney reported for duty as Commander, Fleet Logistics Multi-Mission Wing, operating the CMV-22.

As Commander of the VRM-22 Wing, Captain Chaney executes administrative control and oversees the personnel, training, equipment and maintenance functions for the Wing.  His command role is also responsible for representing the Air Boss with industry partners to move forward with additional aircraft modifications for missions and providing direct support for CMV-22B aircraft to designated carrier air wings.

The VRM-22 Wing is comprised of a number of squadrons and support units.  The squadron VRM-30 was established in 2018 as the US Navy’s first CMV-22B squadron under the VRM-22 Wing which was established in 2019.  NATSG (Navy Aviation Training and Support Group), at Marine Corps Air Station New River, North Carolina provides a liaison role between Navy maintainers and pilots who attend flight training for the Navy CMV-22 with the US Marines Corps.  VRM-50 is a squadron within the Wing and was created in October 2020.  It is the US Navy FRS (Fleet Replacement Squadron) for the CMV-22 aircraft and planned to be permanently assigned in North Island, CA to take over VM-22 training for the Navy by the end of 2022.

The Captain provided an overview of the organization structure and the initial squadron disposition and future roles.

Squadron VRM-30 will be located in San Diego, CA with up to 12 aircraft for the west coast.  Squadron VRM-40 with three aircraft will also be based in San Diego.  Although designated as an east coast squadron in Norfolk, VA, VRM-40 will be temporarily stationed in San Diego to improve unit cohesiveness during FRS training in the CMV-22B.  The FRS,VRM-50 will be based out of San Diego.  Once fully operational, each of the VRM units will support multiple Carrier Strike Groups (CSG).  US Navy CMV-22B units will also be deployed outside of the US in Japan.

Disposition of units, both in the U.S. and overseas, requires significant logistical and facilities preparation to support the role out of these units. The Captain directs the Hangar and Ramp modifications as well as Simulator facility construction at both US and overseas locations.

Training of maintainers and pilots for the new Navy aircraft CMV-22B was greatly assisted by the training and deployment opportunities with the Marines.  The skills and abilities acquired while training with the US Marines was exceptionally beneficial for personnel who returned to their Navy units.

As stated above the CMV-22B is to be the replacement for the C-2A aircraft as the COD.  According to Captain Chaney there are a number of enhancements which support the new aircraft in this role:

The Captain noted that one of the newest upgrades to some of the aircraft is a commercial off-the shelf Garmin GPS.  The aircraft internal GPS does not enable for navigation enhancement but instead, relies on the older technology of TACAN, VOR, NDB, etc.  The addition of the Garmin system keeps pace with the enhanced navigation systems both in CONUS and on overseas missions.  There are future system changes under discussion for: communication upgrades, terrain awareness system, GPS Nav, Modifications and Cargo handling,While the CMV-22B replaces the C-2A as a COD, not all features are enhancements.  The CMV-22B has increased power, fuel capacity, range and max VTOL weight v C-2A trap weight.  It does have fewer seats, smaller cargo capacity, max speed and service ceiling.  An additional limitation is the CMV-22B non-pressurized feature, which will limit carrying passengers without oxygen above 10,000 msl.   As a cargo carrying aircraft, an on-board oxygen generation system enables for crew performance without restriction. 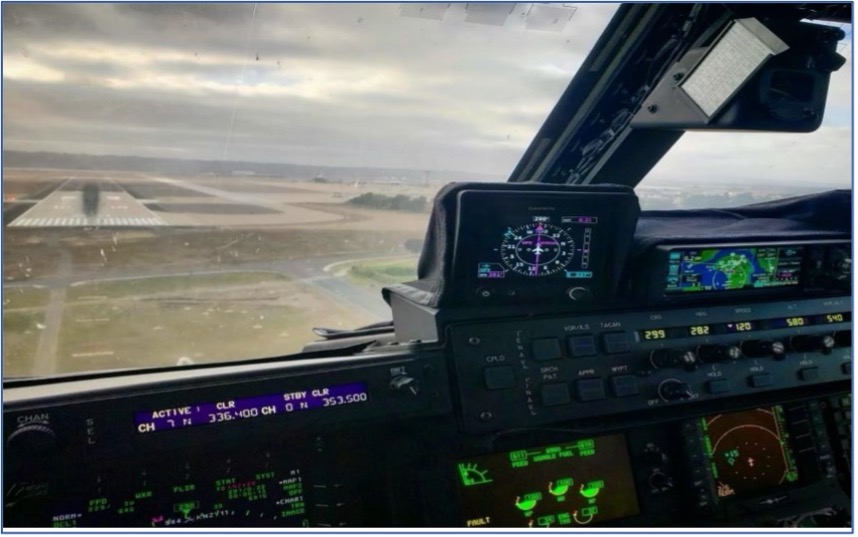 Captain Chaney described the CMV-22B performance as variable based on the mission.  In a low altitude flight, the aircraft is in a VTOL configuration and performs like a helicopter to transport personnel.  In Conversion mode where it transitions from vertical flight to horizontal, it is still at low level.  For high speed, high altitude, long range missions, it is in airplane mode, which will be the primary Navy mission for cargo and supply replenishment at advanced bases and for time-sensitive logistics support.

The Captain reviewed the proposed staffing requirement for CMV-22B detachments:  A headcount of 85 personnel made up of; 9-10 pilots, 12 aircrew, 1 maintenance officer, 1 maintenance senior chief, 57 maintenance personnel and 3 admin.  The sophistication and complexity of the aircraft requires a larger maintenance staff as compared to the C-2A.

The process from acceptance to deployment was a little less than one year.  This demonstrated the attention and capability of the staff, function of the aircraft and support from both land-based as well as ship-board crew.  Some examples of the milestones in 2021 are: January-air-to-air refueling with a C-130, transportability fit checks, load F-35 power module training; February– Medevac demo, COD support, CMV-22 refueling to CMV, helicopter and jet aircraft; March – Cargo load training, virtual maintenance trainer demo; April – paradrops, SAR support, Day / Night CQ; May – Medevac, SAR support and Deck handling.

At the end of the presentation, Captain Chaney opened the program to questions.

Will the CMV-22B be tested using the JPALS landing system?
Training is not scheduled at this time, however there are future upgrades to test with JPALS.

Why are fixed wing pilots being transitioned to the CMV-22B instead of rotary wing pilots?
Training was to follow the USMC model, which did start with fixed-wing trained staff transitioning to the MV-22.
The Navy program would follow a similar path to minimize operational conflict.

Have there been any issues with the Navy training at the Marine base at New River, NC?
The relationship between the Marines and Navy have had no issues for the initial training.  Additional training as discussed have not experienced any issues as well.

Are the overseas Navy assignments to be temporary or permanent with family accompaniment?
There may be some facility limits for aircraft due to total numbers, however, unit assignments are intended to be tour permanent for personnel.

How does the CMV-22B aircraft speed compare to the C-2A or helicopters?
The forward movement will be 220kts, though environments could see an increase to 240kts.  One mission reported a ground speed of 380kts with a tail-wind compared to 120kts for a helicopter and 240kts for a C-2A.

How will the CMV-22B operate onboard ships?
Landings onboard carriers will be MROL (minimum roll-on landing) due to loads and to maintain safety.
Takeoffs will be short take-offs (STO). VTOL can occur, however, load is a factor.

How is fuel usage during vertical lift versus short take-off?
Fuel usage will be greater in vertical lift.  The CMV-22 will not normally use VTOL.