After his United States Marine Corps retirement on January 1, 2002, the General was Federal Security Director for San Diego International Airport from 2002 through 2012.   Since 2012 he has provided consulting services to defense contractors and security service firms.  In 2019 he took the position as Executive Director of the Flying Leatherneck Historical Foundation (FLHF).   General Aguilar’s presentation was about the development of the foundation and the support it provides for the operation of the Flying Leatherneck Air Museum (FLAM).

Mike began by describing the birth of the foundation and the role to preserve, honor and inspire the next generation of young Americans.  By providing financial support, the foundation will preserve the care and restoration of aircraft and other artifacts on display at the Museum, located at the Marine Corps Air Station, Miramar, CA.   With the closure of the museum at Miramar, due to the lack of funding, the foundation is proposing to assume the role for the preservation and care of the museum collection of over 48 aircraft and the planned relocation to the former Marine Corps Air Station El Toro, known as the Orange County Great Park.

The most important mission of the foundation is to expose the next generation to science, technology, engineering and math disciplines through the STEM program.  To take STEM out of the classroom and show the end result through the display of aircraft and the shared stories by those who served: pilots, technicians and as support personnel who made it happen.

The Marine Corps Air Station El Toro Historical Foundation began to help preserve and commemorate the important history of Marine Aviation in 1989.  Prior to moving to Miramar, the museum was at El Toro.  Hangar 244 was converted into a showroom for part of the museum, displaying military exhibits and was used as storage for artifacts and supplies.  In 1999, the museum was relocated to Marine Corps Air Station, Miramar, CA.   The museum at Miramar occupied seven and a half acre foot-print with a small facility assembled from double-wide trailers.  The vast majority of the aircraft collection were on display outside in front of the trailers.

Efforts to secure approval for the foundation taking over full operation and funding for the facility and preserving all aircraft and material at Miramar were unsuccessful.   For the past 16 months the foundation has been working with the Marine Corps to find an alternative location.  Special thanks go out to Congressman Scott Peters, Congressman Darrell Issa, and State Senator Brian Jones, who personally reached out to HQMC on behalf of the foundation.  Although the foundation was not able to keep the museum at Miramar, the mission to preserve and maintain the legacy of Marine Corps aviation continues.

Achievements to date to meet the proposed alternative museum location are the following:

The challenges that remain as part of the project are as follows:

The proposed relocation and reopening of the museum will require a team that will manage the museum collection, move the collection and artifacts, establish the new facility and provide staff, volunteer management, community coordination and public introduction.

The organizations participating are:

The first goals and objectives for the museum are the:

The preliminary footprint for the museum, surrounding facilities and grounds is expected to contain a series of converted hangars and other functions.   Located towards the south side of the former Marine Air Station El Toro, one hangar will become the FLAM Museum Innovation Center.  Immediately adjacent to the Center will be a Plaza, separating the Center from the Library Cultural Center.  A short distance away will be an Events Center.  In addition to the air museum layout, a long-term project to construct a Fire Museum will be included in the complex footprint and will be located, to the north of the planned hangars and plaza. 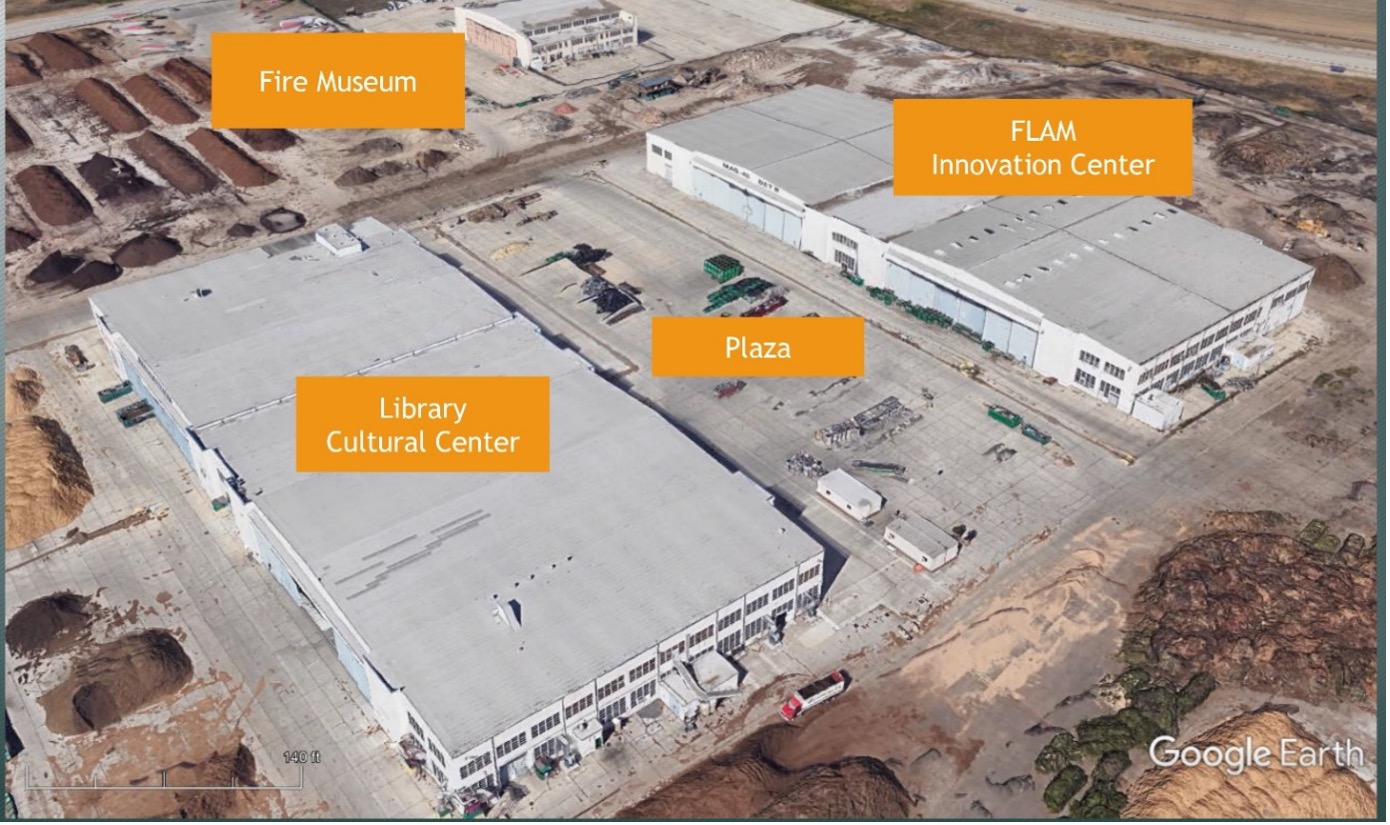 By containing the multiple facilities in one area, visitors can be afforded significant access  to different venues and choose to tour all from one area.

The Innovation Center is to be a converted hangar with 215,000 square foot area.  The proposed changes will house the collection and add office and storage space.  The City of Irvine estimated cost to retrofit the hangar and complete the renovation is set between $20-30M.   The relocation of the collection from Miramar is estimated between $3-4M.

According to Mike, the Marine Corps could expect to spend $3-5M over a 5-year period to relocate or dispose of the collection.  This might require working with multiple sources, and may prolong the conversion of the Miramar facility.  It may also result in increased cost during the transition.  If the Foundation proposal is approved, the collection could be moved by the end of 2021.  The Marine Corps would be able to recover the Miramar facility much sooner.  The proposed plan is hoped to secure the Marine Corps approval and have them cover the relocation cost.

Mike noted that success for a project of this nature requires a plan and a timeline to identify and measure milestones.  The most optimistic timeline has a completion date of March 2023.  It is the objective of the project to open the doors of the museum by June 2023.  To meet the goals, fund raising will take first priority.  The fund-raising campaign objective is to raise $2M for 2021 in support of ongoing planning and development.  An additional $3M for 2022 will target establishment of exhibits and displays, office/conference rooms, restoration operations, and other revenue generating operations.  To date, combined pledges are expected to meet the 2021 goal.

Mike noted that the organization structure for the museum will be similar to the setup of the San Diego Air and Space Museum.  The City of Irvine will be the owner of the land and will handle improvements and manage the master lease to the Foundation.  As the operator of the facility, the Foundation will be the lease holder and will control the museum, policy, annual budget, fund raising and staff.

A seven-year budget was created to focus on both revenue and expenses.  This will be the basis in determining both requirements for funds and management targets.  As the project progresses, the budget will be revisited.

Mike described the next steps needed in moving forward with the project:

At the end of the presentation, Mike opened the meeting to questions:

Is the City of Irvine going to charge admission?
Since the Foundation will be the museum operator, it will be responsible for income management.  The pricing structure will be following similar charges that exist among other aviation related museums in the area.

Will the facility open completed sections of the museum in a progressive manner or await full completion?
While special events may take place for selected groups or donors, the full opening of the facility will await completion rather than expose visitors to work in progress events.

Has consideration been given to utilizing the existing runway and ramp for possible fly-in events?
The facility has been reviewed for potential future events of this nature.  However, the initial focus is getting the project off the ground.  Once established, consideration for such events may occur.