At their August 11, 2022 meeting, the ANA Grampaw Pettibone Squadron hosted Steven Lund LTC USA (Ret).  Steven is a returning speaker and selected to share his research regarding the Imperial Japanese Navy (IJN) midget submarine actions against US forces in Hawaii as part of the December 7, 1941 attack.  The Colonel, a retired Army aviator, served twenty-nine years in the military, with one tour in Vietnam (1968-69) flying helicopters.  He has approximately 10,000 hours in rotorcraft and 6,000 hours in fixed- wing aircraft.

According to Colonel Lund, the Japanese Navy was the third largest and most modern Navy in the world at the beginning of World War II.  Part of the Japanese submarine fleet included a long-range Japanese Type C-1 Cruiser class Submarine whose length of 358 feet was 47 feet longer than the US Gato Class Submarine.   For the Pearl Harbor attack, each of five C-1 class submarines were used to transport, in piggyback style, a Japanese two-man midget submarine Type A.  The midget submarines had a length of 78 feet 5 inches and were armed with two 1800-pound torpedoes.  The Type A had an 18-knot submerged speed, faster than the surface speed of most US submarines. 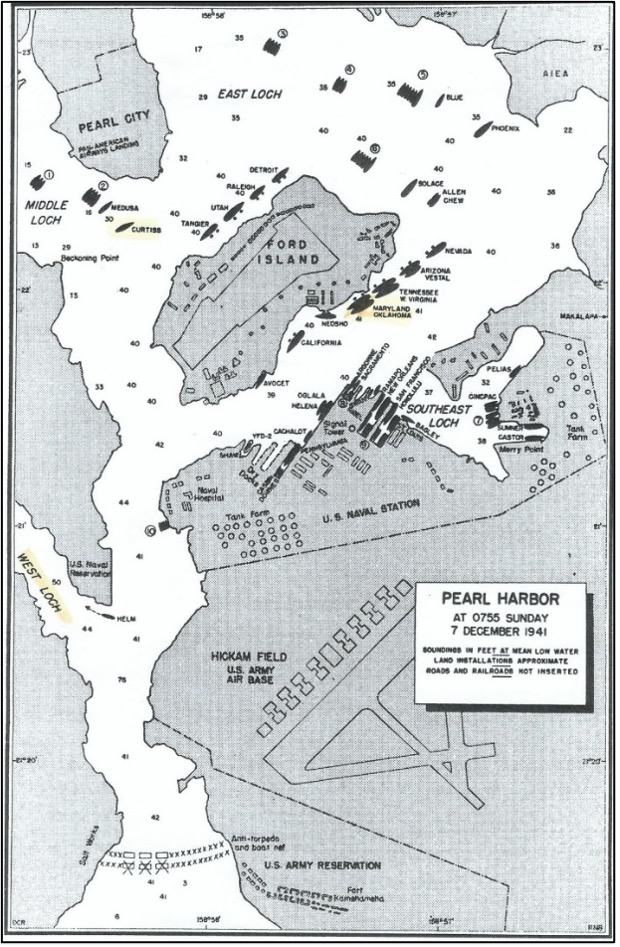 Pearl Harbor was the US Pacific Fleet Home port and the Japanese main target areas were the Fleet anchorages in the Inner Harbor, Battleship Row on the south side of Ford Island, and the aircraft and facilities at Hickam Field.

In addition to transporting the midget submarines(sub), the C-1 Cruiser mission, was to “pick off” escaping US ships and recover their assigned midget sub after the completion of their mission.  The midget sub mission was to penetrate harbor defenses, inflict maximum damage and return to the Cruiser Sub for transport away from the target area.

Each midget sub was manned shortly after midnight on December 7, 1941, launched from each Cruiser sub and began to position itself for the morning attack.

One midget sub from the 1-24, experienced navigation issues almost immediately due to a faulty gyro compass and poison fumes from a leaking battery that powered the electric motor.  The compass error led to the sub traveling off course and eventually running aground on the east side of the island.  The two-man crew attempted to scuttle the midget sub and swim ashore.  However, the sub did not explode and one crew member drowned.  The second crew member, Ensign Kazuo Sakamaki, was knocked unconscious by the surf.  He was captured and became the first Japanese prisoner of WWII.  This midget sub was further identified as HA-19 and eventually recovered by US forces.  It was restored and taken on tour in the US as a fund raiser.   It resides today in Fredericksburg, Texas at the National Museum of the Pacific War.

On the morning of December 7, the cargo ship USS Antares (AG-10) was approaching the entrance to Pearl Harbor at 06:30 when the on-duty watch spotted a suspicious object.  Antares notified the destroyer USS Ward (DD-139), on patrol off the harbor entrance, and t 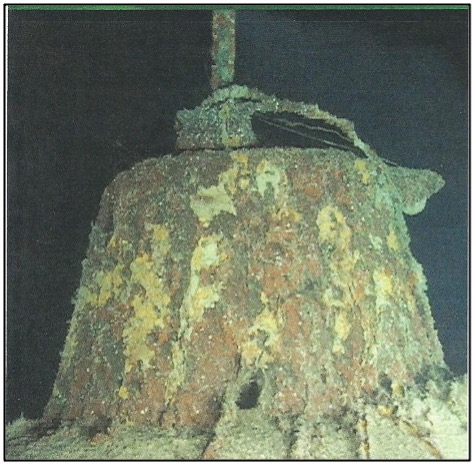 he latter altered course toward the object which proved to be a midget submarine.  The Ward attacked the sub, and its forward deck guns fired but missed.  The aft battery scored a direct hit on the sub’s conning tower and crew members confirmed damage.  “Regular” Navy personnel disputed the claim that mere “Reservists” from MINNESOTA(!) could have achieved the “kill” on the enemy sub, thereby firing the first US shot of the war.  In 2002, mini-subs from the Hawaii Undersea Research Lab located the Japanese midget sub identified from the I-20 lying outside the Harbor entrance and confirmed the hit as reported by the aft battery.

Steve described subsequent events of the other midget subs.  The midget sub from the I-22 was spotted on the west side of Ford Island.  Although it fired both torpedoes without effect, the Destroyer Monaghan rammed the sub, fired on it and followed up with depth charges before it was sunk.  The engagement between the USS Monaghan (DD-354) and the I-22, occurred as IJN aircraft began their attack against the US fleet.

One of the first Battleships to suffer damage from both a sub attack and aerial assault was the USS Oklahoma (BB-37).  At about 7:56 a.m., three torpedoes struck the port side of the ship, causing the ship to immediately list to port.  The supporting photographic evidence presented in the ANA program along with the speaker’s material, support the 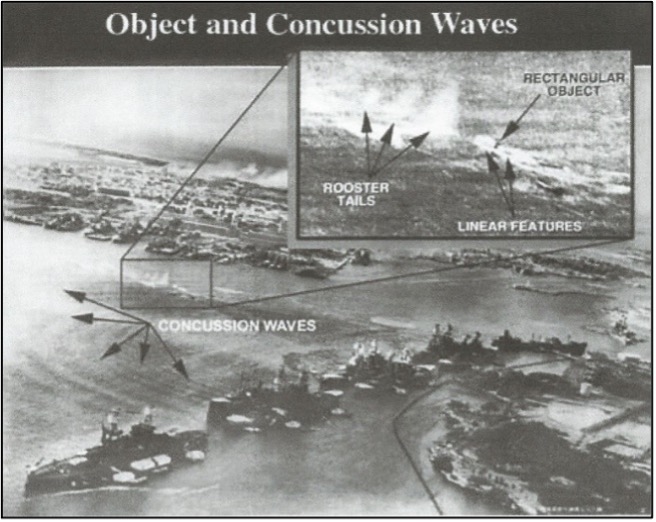 premise that two torpedoes from the I-16 midget sub were successfully launched against the Oklahoma in addition to one aerial torpedo fired by an IJN aircraft.  All three struck the ship below the water line, causing the ship to list to port.  As the ship listed, more torpedoes struck the Oklahoma’s side at higher levels.  Nine torpedoes were estimated to have struck the ship and it finally rolled over at 8:08 am, a mere 12 minutes after the attack began.

The I-16 was unable to leave the harbor once the submarine nets were closed.  It is speculated that the sub maneuvered into an area known as the West Loch and awaited the opportunity to leave the harbor.  When unable to exit, the crew chose to scuttle the sub and escape.   The clean-up from the attack shortly after was unable to locate the remains of the I-16 midget sub.  Subsequent research years later suggest that the whereabouts of the I-16 was a revealed when three pieces of such a craft were found outside the harbor entrance between 1992 and 2000. 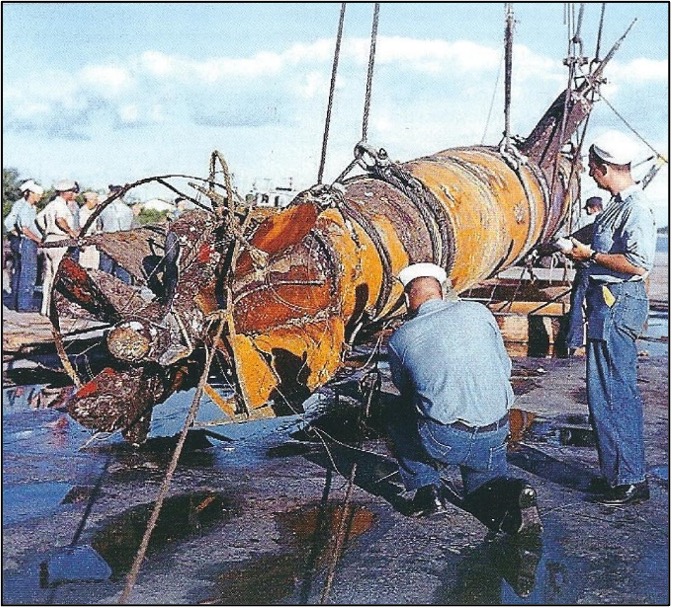 During the attack, intense anti-submarine activity was underway outside the harbor. Other periscopes were sighted and many suspected targets depth charged.  The results of some of the depth charging emerged in 1960 when the midget sub from the I-18 was discovered outside the harbor entrance in Keehi Lagoon.  Her hatch was unsecured and the torpedoes were still in their tubes.  It is assumed that the crew drowned.

The whereabouts of the I-16 midget sub, was a mystery until three pieces of such a craft were found outside the harbor entrance between 1992 and 2000.

The area identified as the West Loch, marked by the arrow in the accompanying

photo was being used to load ships for the Saipan invasion in May 1944.  While loading supplies and munitions, an accident occurred and subsequent explosions left significant debris in the water and on land.  US Naval salvage teams removed the wreckage of the ships and transported the material out to sea to be dumped.

The effectiveness of the I-16 midget sub attack was later exaggerated by Japanese propaganda, claiming that she had actually sunk the Arizona.  This claim was clearly refuted and the attack on the USS Oklahoma may have included the I-16 sub.

The midget sub crews were celebrated for their sacrifice in the Japanese press.  Nine were portrayed as heroes and treated as “Gods”.  The tenth crew member, POW Ensign Kazuo Sakamaki who had been captured was held in disgrace.

Future midget sub operations during the war were conducted using some of the same “Mother ships” that participated in the Pearl Harbor Operation.  Damage inflicted on US and allied shipping was minimal.  The resultant loss of all participating IJN midget submarines and crew confirmed the operational failure of the program.