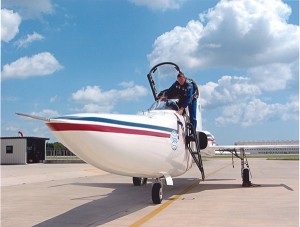 If you broke the sound barrier and there was nobody there to hear it, would you still be home in time for lunch? Roy Martin did, and he was. Roy was the test pilot for the Shaped Sonic Boom project. The Shaped Sonic Boom was an experimental program intended to discover whether it was possible to fly an aircraft farther than the speed of sound without causing the characteristic noise that had made supersonic flight over populated areas impracticable. To do this, a team of experts at Northrop Grumman designed a specially modified configuration of the supersonic F-5flighter plane. It’s unique shape enabled the aircraft to fly at supersonic speeds without anyone on the ground below being able to detect it.

This experiment, done in cooperation with Northrop Grumman, NASA, DARPA and the Department of Defense, demonstrated that the supersonic flight can be achieved without the characteristic shock wave reaching the ground at the kind of intensity that had historically generated public resistance and created restrictions that had made routine supersonic transportation impracticable. Museum member, Roy Martin, demonstrated the practicability and will be recognized as one of the pioneers of future civilian and military supersonic transport programs