After months, and maybe years of prodding, we finally got a different pose for the SOQ’s after they received their awards and gifts. For years, Hal McDonnel has been pestering us to arrange the SOQs in  something other than a “lineup”. The photo is not too bad, notwithstanding the fact that our photographer, Dick Fields, could not attend the meeting. 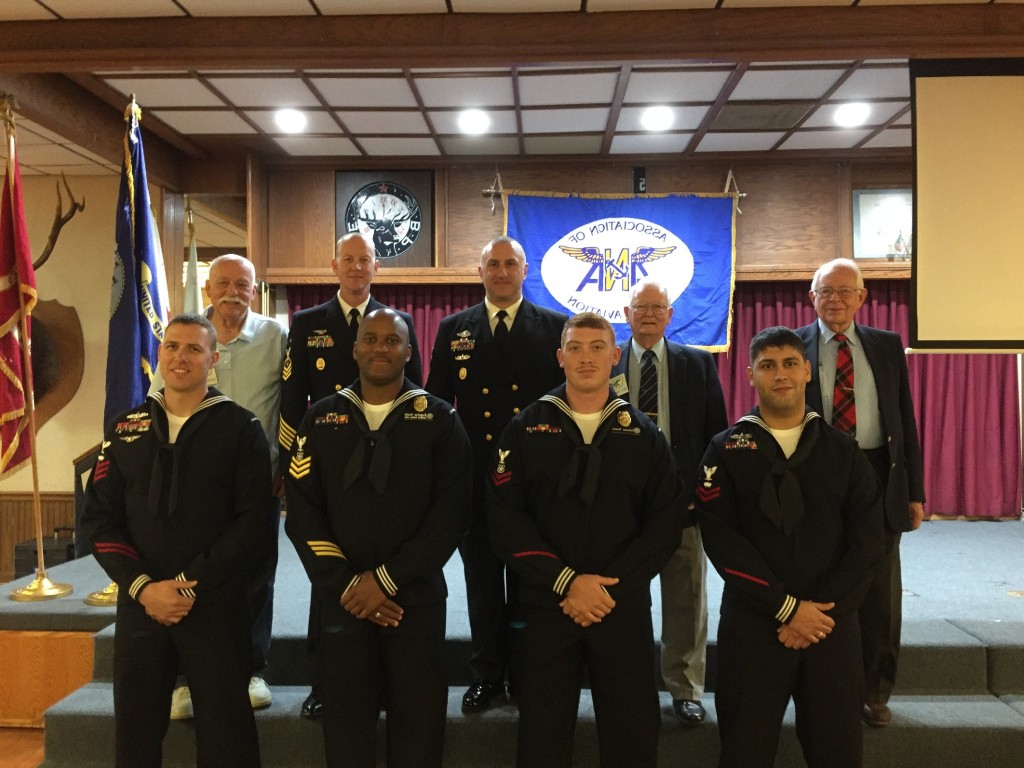 The Awardees were MN2 Rey A. Collazo Luciano, MN1 (SW/AW) William A. Morse, MA1 Eugene Scott, and MA2 Estevan Hueso. Handling the MC duties was CMDCM Jeff Reeder. Also attending was CMDCM Don Schrader, who is the CMC at NMC. As I understand it, Don is going to be taking over the job of introducing to SOQs starting this next quarter. Actually the next program will be coming up in May so he does not have much time to learn the ropes. Good luck Donnie!

Also in the picture are George Del Gaudio, Bill Thompson and Sel Ramsay, the guys who run the show when it comes to the SOQ Awards Program. Without their participation, the program could not have lasted so many years. Thank you Sel, George and Bill. In addition we again thank those restaurants in Seal Beach and The Crab Cooker in Tustin for their support of the program. Those gift cards come in real handy for the

SOQs and their significant others when they want to go out for a nice meal in Seal Beach or Tustin. Thanks again Jim at Crab Cooker, Shawn at Beachwood BBQ, Chris at O’Malley’s, Felix at Yucatan Grill, Aaron at The Hangout, Pete at Athens West and Susan at Hennessey’s. The Sailors really appreciate your support. If any member is at one of these establishments, please make it known that you appreciate their support of this fine program and the superior Sailors who receive the awards and gift cards.

Finally, thank you to the Gramps members who attend our luncheons and those of you who cannot attend but send in donations. Your financial support allows us to continue this fine program.