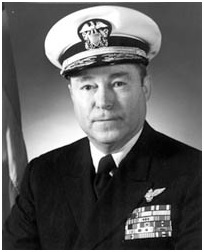 Following boyhood in Missouri, Rear Admiral Shelton entered the Navy in 1939 as an enlisted man. He served in the battleships New Mexico (BB-40) and California (BB-44) before attending prep school and then the Naval Academy, from which he graduated in 1944. He had wartime duty in the light cruiser St. Louis (CL-49) before completing flight training. He was among the Navy’s pioneers in night fighter operations and later served as a test pilot. Squadrons over the years included VF-1E, VCN- 1, VC-3, and VC-124. He commanded Fighter Squadron 92 and Carrier Air Wing 17; the latter was in the Ranger (CVA-61). He had a role in the introduction of the F7U Cutlass into the fleet. His ship commands during the Vietnam War were the ammunition ship Paricutin (AE-18) and the amphibious assault ship Tripoli (LPH-10). He attended the Naval War College and had several tours of duty on the OpNav staff. Included in the latter was work in the Politico-Military Policy Division, particularly in connection with Pan-American affairs. In 1973-75 he commanded U.S. Naval Forces Philippines and later served as director for plans (J-5) on the CinCPac staff before retiring in 1979. His tour in the Philippines was noteworthy because of the hosting of South Vietnamese refugees at Subic Bay after their country was overrun in the spring of 1975.