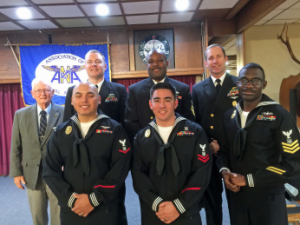 On Thursday, February 8, the Grampaw Pettibone Squadron had the privilege to honor the Sailors of the Quarterstationed at the Naval Weapons Station, Seal Beach. The recognition was at the Elks Lodge, Garden Grove, during the regular monthly meeting.

Also at the Naval Weapons Station is the Navy Munitions Command Pacific CONUS West Division. MNCS(SW) Luis Floresisthe Senior Enlisted Advisor for this Unit. They have selected only one person to be honored this quarter, the Junior Sailor of the Quarter, who is LS2(AW) Amanda Meyer. She was not present because she wasrecovering from surgery.

The certificates were presented by MACS Pascal Herrling, the Senior Chief responsible for Security at the Naval WeaponsStation. CMDCS(AW/NAC)KirbyLee, Command Senior Chief for the NWS introduced the sailors. They were assisted by MNC Richmond Dzansi, who represented the NWS Navy Munitions Command Unit.

We thank the following restaurants who participated in the honoring the Sailors of the Quarter: In Seal Beach on Main Street were: 320 MAIN, Avila’s El Ranchito Mexican Restaurant, Beachwood BBQ, Chick fil A(12101 Seal Beach Blvd), Crema Café, Finbar’s Italian Restaurant(1041 PCH), Glory Days Beachside Grill(620 PCH), Hennessey’s Tavern, O’Malley’s on Main, Romano’s Macaroni Grill(12380 Seal Beach Blvd), THE ABBEY, and YUCATAN Grill(550 PCH). In Long Beach we thank: Beachwood BBQ(210 East 3 rdSt), MIMI’S(6670 E. PCH), and TheCrab Pot(215 Marina Dr). In Huntington Beach it was DON THE BEACHCOMBER(16278 PCH), and FISH CAMP(16600 PCH). In Tustin the participating restaurant was The Crab Cooker(17260 17thStreet). We appreciate also the USAA Insurance Company for their presentation of attractive plaques to the Sailors of the Quarter. Every sailor on the Seal Beach Naval Weapons Station deserves our respect. Those who do an outstanding job deserve our recognition.