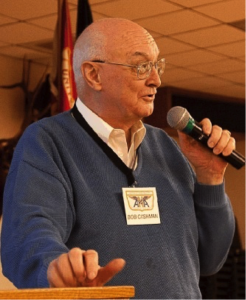 Mr. Cashman will relate interviews with World War I pilots and mechanics in assisting the Smithsonian Institution to acquire an original Nieuport 28 aircraft, the first U.S. military fighter. Starting with Eddie Martin and looking for parts in museums all over the world, it was discovered that nearly all but three Nieuport 28’s were destroyed in combat; or, in the filming of Howard Hughes’ Hell’s Angels movie. Deciding to build a flying full-size reproduction Nieuport 28, Cashman acquired the original plans from the French government and built an aircraft accurate to the plans. The plane flew but was a disaster! With the assistance of engineers from the Boeing Company and their computers, it became apparent that there were big 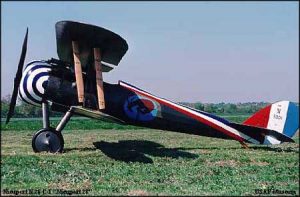 problems with all of the World War I British and French aircraft. The combined talents of retired Boeing engineers and Robert Baslee of Aerodrome Airplanes, it was possible to develop a successful full scale Nieuport 28 and qualify it as a kit.

Robert L. Cashman grew up in an aviation family. His father, two brothers and a brother-in-law were all pilots. All had served in the military. He first soloed in his brother’s Cessna 140 in 1950 at 18 years of age. He has been flying continually ever since.

He has owned more than a dozen different aircraft and currently owns and flies a Cessna T210 and a replica Nieuport 28.