The regular August meeting of the Grampaw Pettibone Squadron at the Elks Lodge in Garden Grove was certainly not routine.  The presence of the Sailors of the Quarter from the Seal Beach Naval Weapons Station stirred the hearts of our members—many of whom had served in the military, especially the Navy, in earlier days.  Today’s outstanding sailors from the Naval Weapons Station included the Senior Sailor of the Quarter: MA1 Jayananda Moy (not present because of responsibilities at work); Junior SOQ: MA2 Joshua Ramirez; and Bluejacket of the Quarter: MA3 Johnathon Lewis.  Those recognized from the Navy Munitions Command CONUS West Division Unit, Seal Beach were the Senior SOQ: YN1(SW/AW) Joseph Williams; Junior SOQ YN2(SW/AW) Joanna Carbajalmendiola; and Bluejacket of the Quarter: MN3 Freddie Parson.  The Commanding Officer of the Base, Captain Noel Dahlke, the Command Senior Chief Petty Officer Kirby Lee, and MNC Brian Lampman  presided in the presentation of the Grampaw Pettibone Squadron Certificates of Recognition to the sailors being honored. 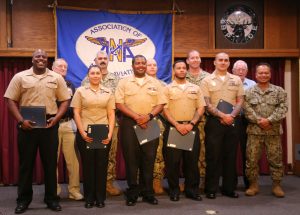