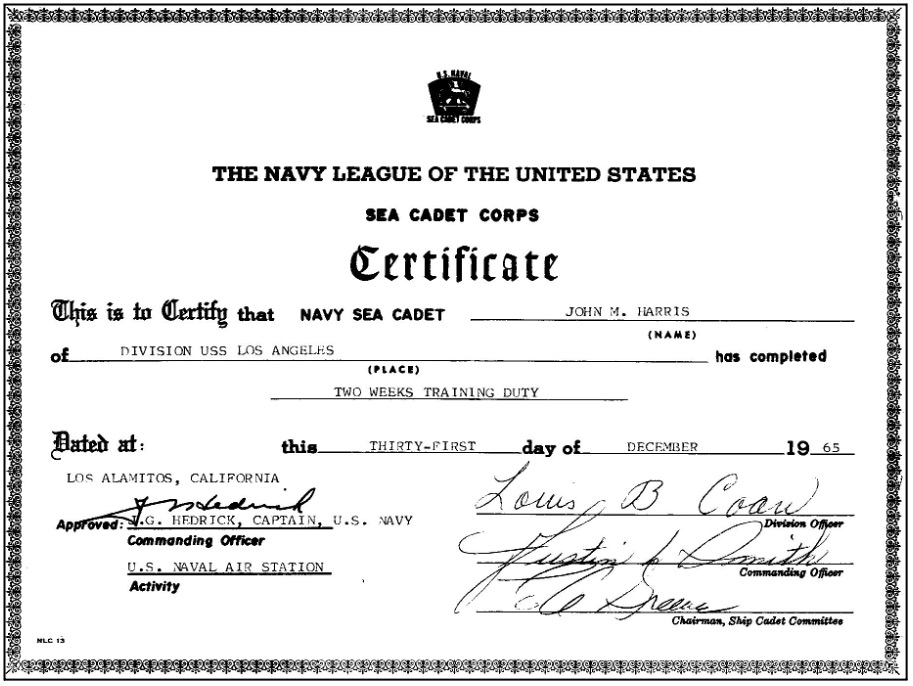 At their November 10, 2022 meeting, the ANA Grampaw Pettibone Squadron hosted John Harris CWO5 USA (Ret).   John spoke about his experience as a Sea Cadet and how it prepared him for his military career.  His 44-year military career started at age 17 and ended when he turned 62 years and 2 months; this was two months after being eligible for Social Security.

John’s interest in the military began as a child growing up in Southern California in the 1950s.  His two favorite television programs were the Whirlybirds, a show about commercial helicopters and the Silent Service, a documentary series which reenacted WWII Submarine service missions.  His favorite movie was Mr. Roberts, which presented examples of both good and bad leadership and how to push the envelope of established standards of business and authority.  Some of John’s relatives served in the US Navy in WWII.  He listened to their stories with enthusiasm.  He was drawn to military life, combat and the uniform.

As a 14-year-old 9th grader in 1965, John read a news story about the Sea Cadets and contacted a local US Navy Recruiter before visiting the local office in Los Alamitos.  The Sea Cadets were set up similar to the US Naval Reserve, including the same physical entrance exams.    After passing the entrance tests, John was scheduled for a two-week boot camp.  All documentation and training, including the training schedule, resembled those of the Naval Reserve Program.  Those Sea Cadets who achieved the rank of E4 while a Cadet, were allowed to enlist in the Naval Reserve in the advanced rank of E3 (Seaman). 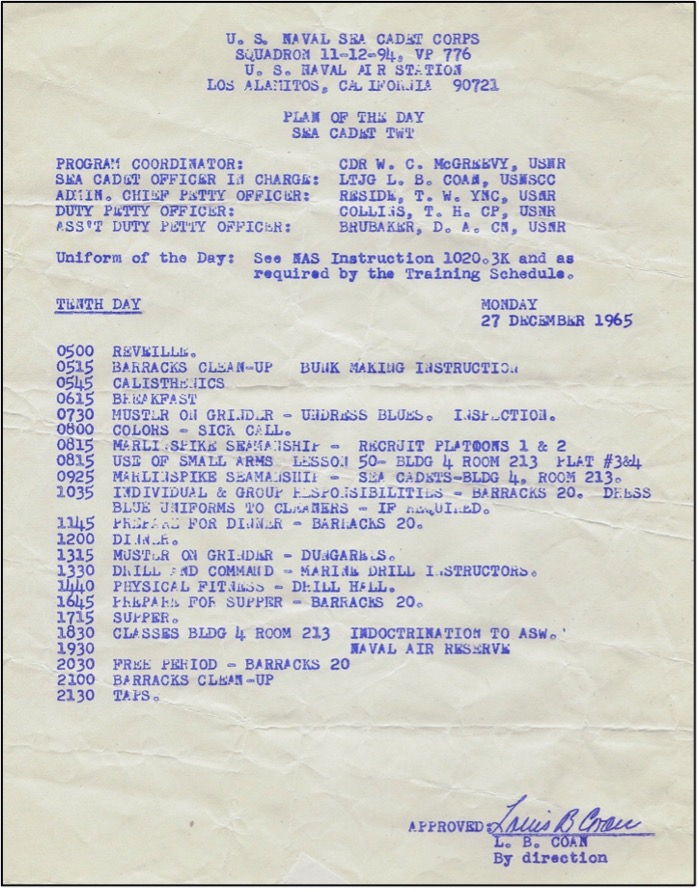 Because his training took place at the Los Alamitos Naval Air Station, John had opportunities to train in other disciplines besides Naval surface units.  Less than one year after completing training, John flew in a Naval aircraft for the first time. 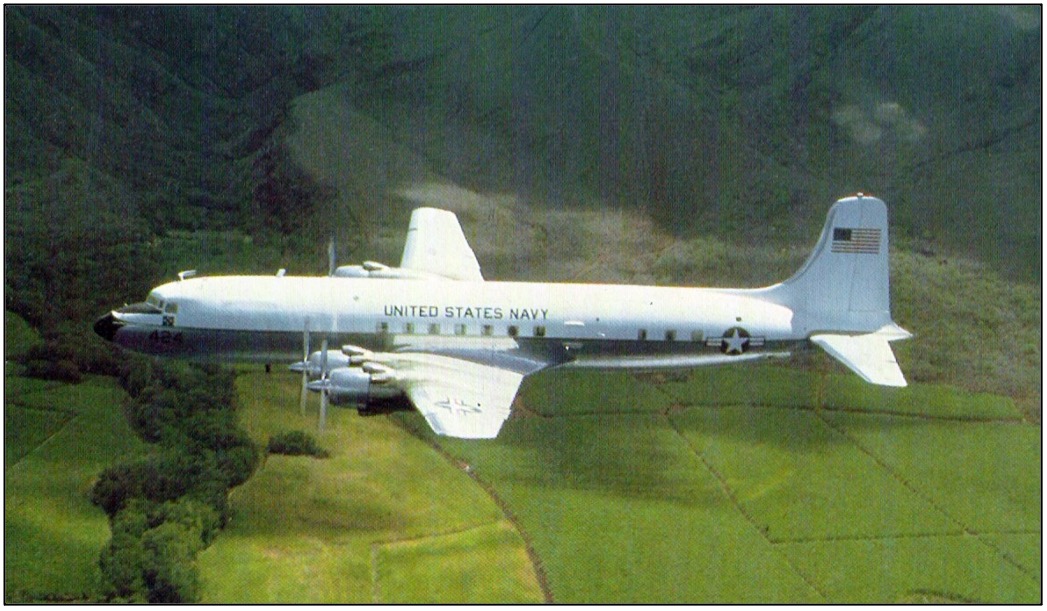 John was told that as a Sea Cadet, personnel could do anything a Naval Reserve member had available to them.  There were Naval Reserve ships as part of the fleet and manned by a limited number of active-duty crew and a larger group of Naval Reserve personnel who would appear on weekends.  John’s first on-board experience was on the USS Vammen DE-644 destroyer escort, a ship that had been commissioned in May 1944.  The ship was part of the Naval Reserve Training in June 1966.  The assignment was to conduct anti-aircraft training near San Clemente Island.  After firing some 80 rounds at a towed aerial target, it was determined that no rounds hit the target.  During the same cruise, the ship had engine problems and broke down.

In order to advance in rank, Sea Cadets had to take Naval Correspondence Courses and then be assigned to hands-on training for the selected discipline.  John was still interested in the submarine service and discovered a training program for Mineman.  He signed up believing that it would enable him to qualify for a submarine assignment.   However, upon further investigation, the course was identified as classified and confidential.  The Naval Reserve Unit Commander could not even obtain the material for the course because of the confidential classification.  It could only be sent to an Active-Duty Command of either a ship or installation, with the personal approval of the 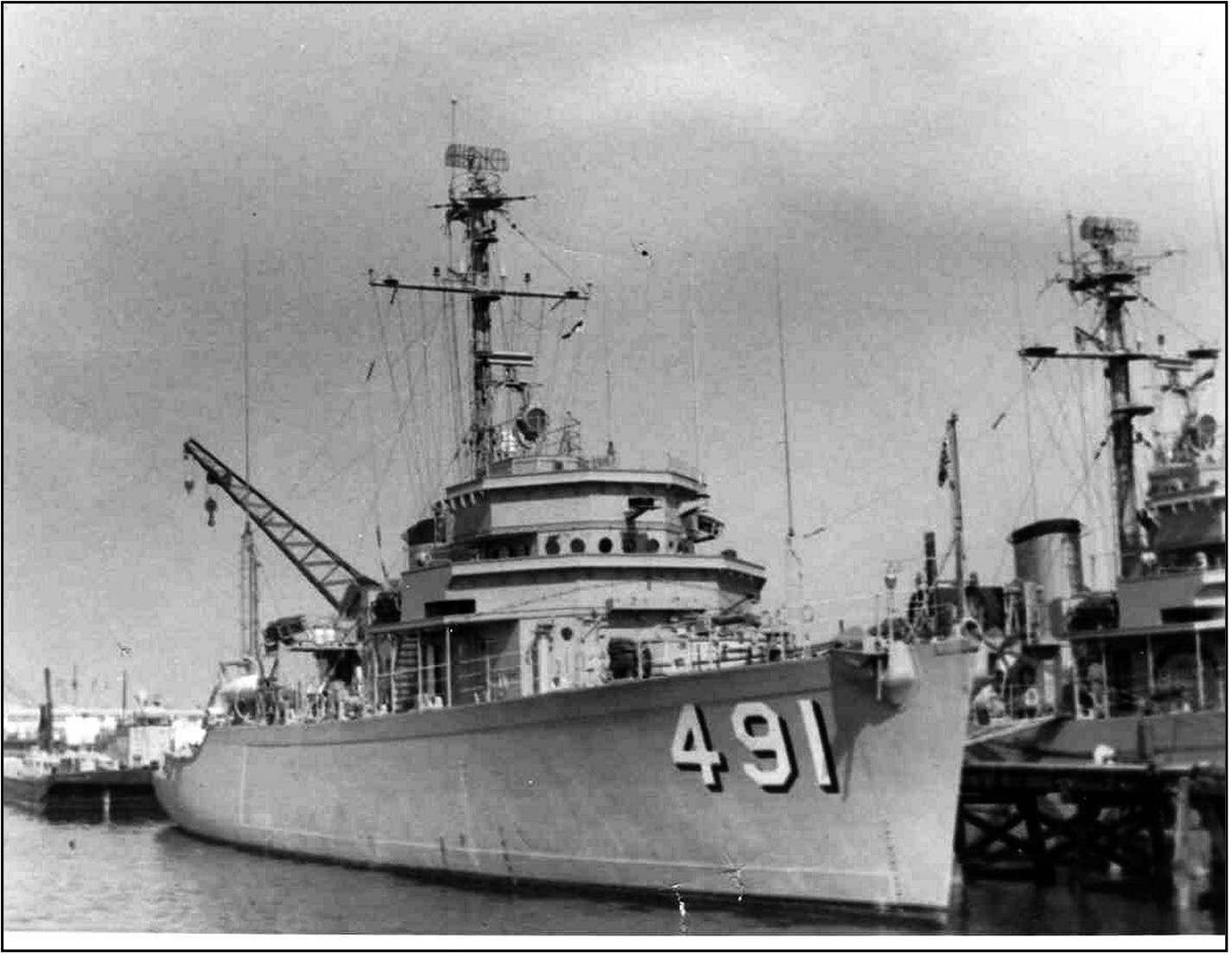 Commanding Officer.  John’s request was first denied by the C.O. of NAS Los Alamitos, which might have killed the subject.  But John was determined to “push the envelope” and directly approached the C.O. of the Seal Beach Naval Weapons Station.  He specifically asked the Commander if he would be willing to grant a Command Confidential Security clearance and access for a 15-year-old Sea Cadet.  Captain Eugene Simpson, USNA Class of 1939, did just that.  Soon after beginning the Mineman course, John  trained, for one week aboard the minesweeper USS Persistent MSO-491, in December, 1966.

The program offered to the Sea Cadets included a ‘Dream Sheet’.  Sea Cadets could choose among a series of options that enabled them to obtain training in different disciplines such as; SEALS, UDT, submarines or other special programs.

During this same time period, John’s unit leadership formed a section of Sea Cadets, who would undergo diesel submarine training, alongside two drilling USNR units.   This was quite a unique program for the USS Los Angeles Division.   To the best of John’s knowledge, no other USNSCC unit opted to establish such a section.  The training would take place on board the USS Roncador SS-301, a WWII fleet sub which was part of the Submarine Reserve, based at the Long Beach Naval Station.   Training commenced on 3 December 1966, together with Naval Reserve Sub Divisions 11-6 and 11-7.

The USS Roncador SS-301 was a non-moveable training submarine.  With the propellers removed, various on-board tanks sealed to prevent usage, the sub nevertheless was used to train personnel in procedures.  The diesel engines could be turned on in order to conduct operational and emergency standards training.  Shortly after spending time on the sub, John was able to receive his first submerged at-sea training.  In August 1967, along with other Sea Cadets, John joined the crew of the USS Bluegill SS-242, a Gato-class Fleet Boat.  During his on-board assignment, John observed a mine arming and launching exercise.  While the primary focus was training for sub duty, the members of the Cadet Sub Section continued to drill every Tuesday night with the rest of the surface unit at NRTC Los Alamitos.

In November 1967, the Sea Cadets embarked on a one-week cruise aboard the USS Frontier AD-25, a destroyer tender.  The voyage took them from Long Beach Naval Station to Hunter’s Point Naval Shipyard in San Francisco, and back.  They stood underway watches on a 24-hour schedule, during both legs.  On the return leg from San Francisco the Sea Cadets were able to observe the operation of a drone, QH-50 DASH (Drone Anti-Submarine Helicopter), from the Frontier’s helipad. 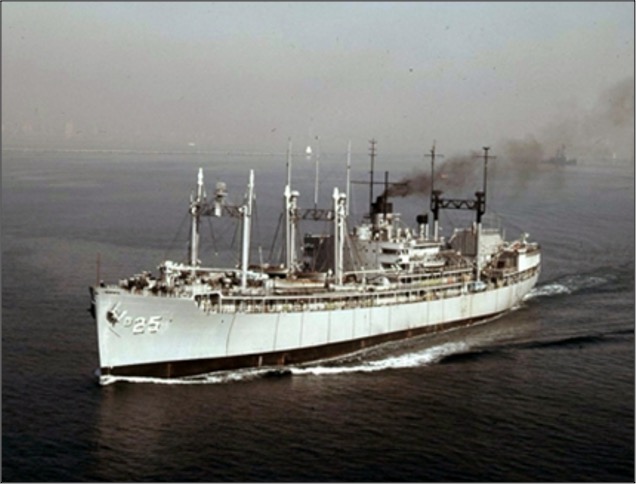 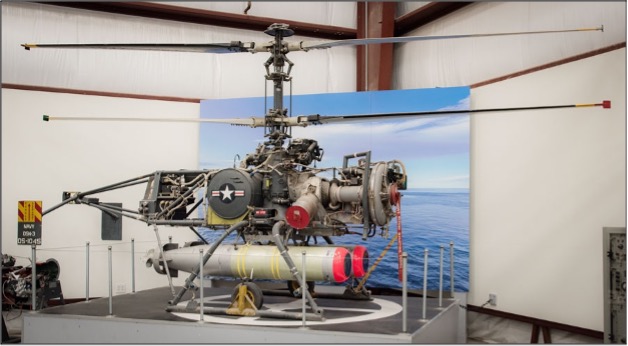 In December, 1967, the Sea Cadet unit was re-designated as the USS Sterett Division, in honor of their new sponsor, a brand-new Guided Missile Cruiser, DLG-31. 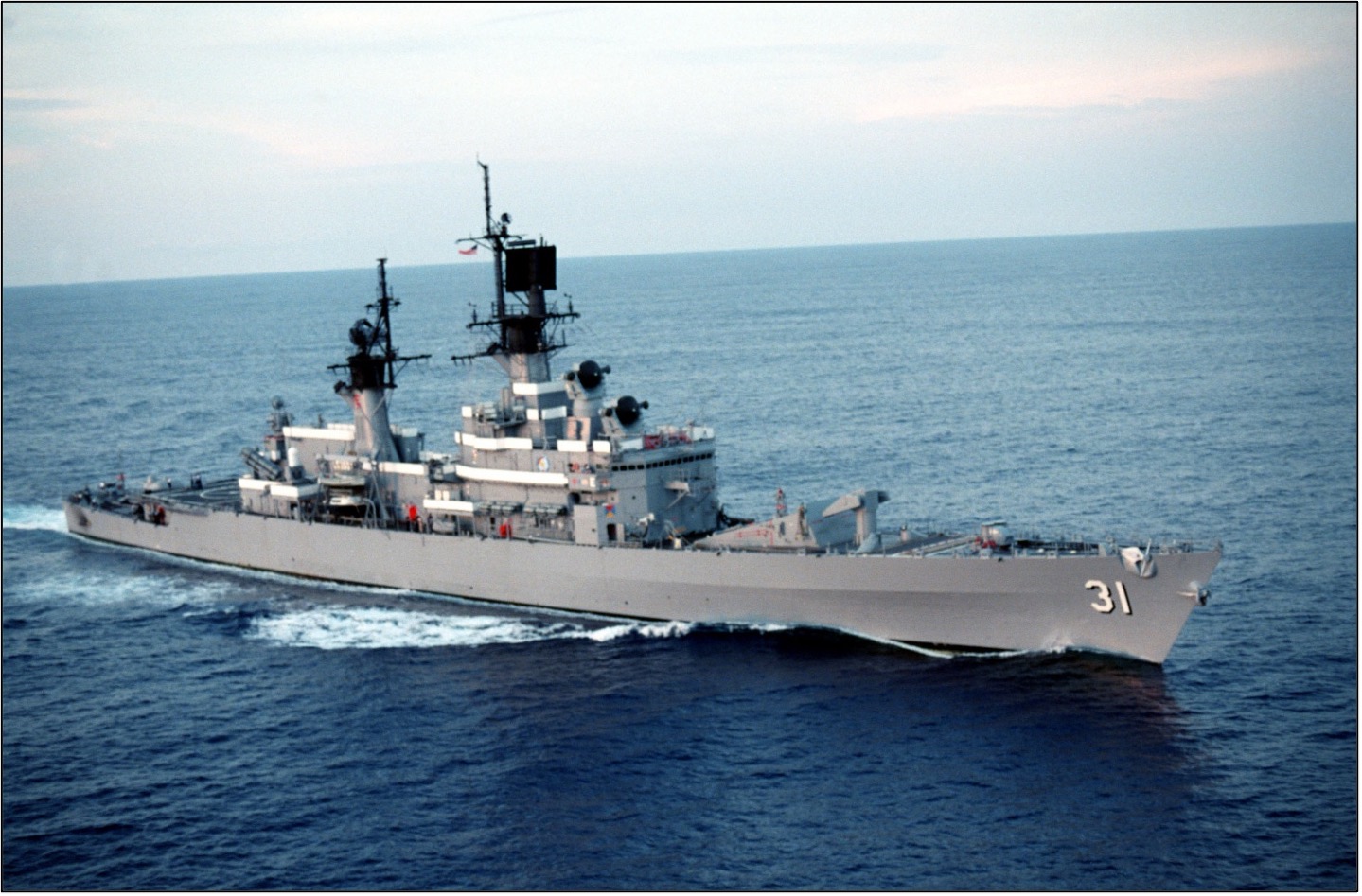 Sea Cadets were granted opportunities to serve on other submarines for submerged training.

In January 1968 while training one weekend with the USNR on the diesel submarine USS Charr SS-328, a fire broke out while submerged, killing all electrical power and bringing the sub to a standstill in complete darkness.  John and another 16-year-old Sea Cadet, R. J. Hansen, were both in the after-torpedo room.  Although novices, in their emergency procedures training, they had both paid attention in class as to where the switches to turn on emergency lighting were located, which were wired directly to the sub’s batteries.  They managed to locates the switches and immediately restored some lighting to the compartment.  They started to review the procedures to escape from a sunken sub via the after hatch.  Fortunately, power was restored and the sub resumed operations.

Soon after turning 17, John and his friends were greatly disappointed to learn that the USNR had raised the minimum enlistment age to 18.  Eager to join the military, John Harris and his friend Jim Scott enlisted in the US Army Reserve, while seniors in high school. 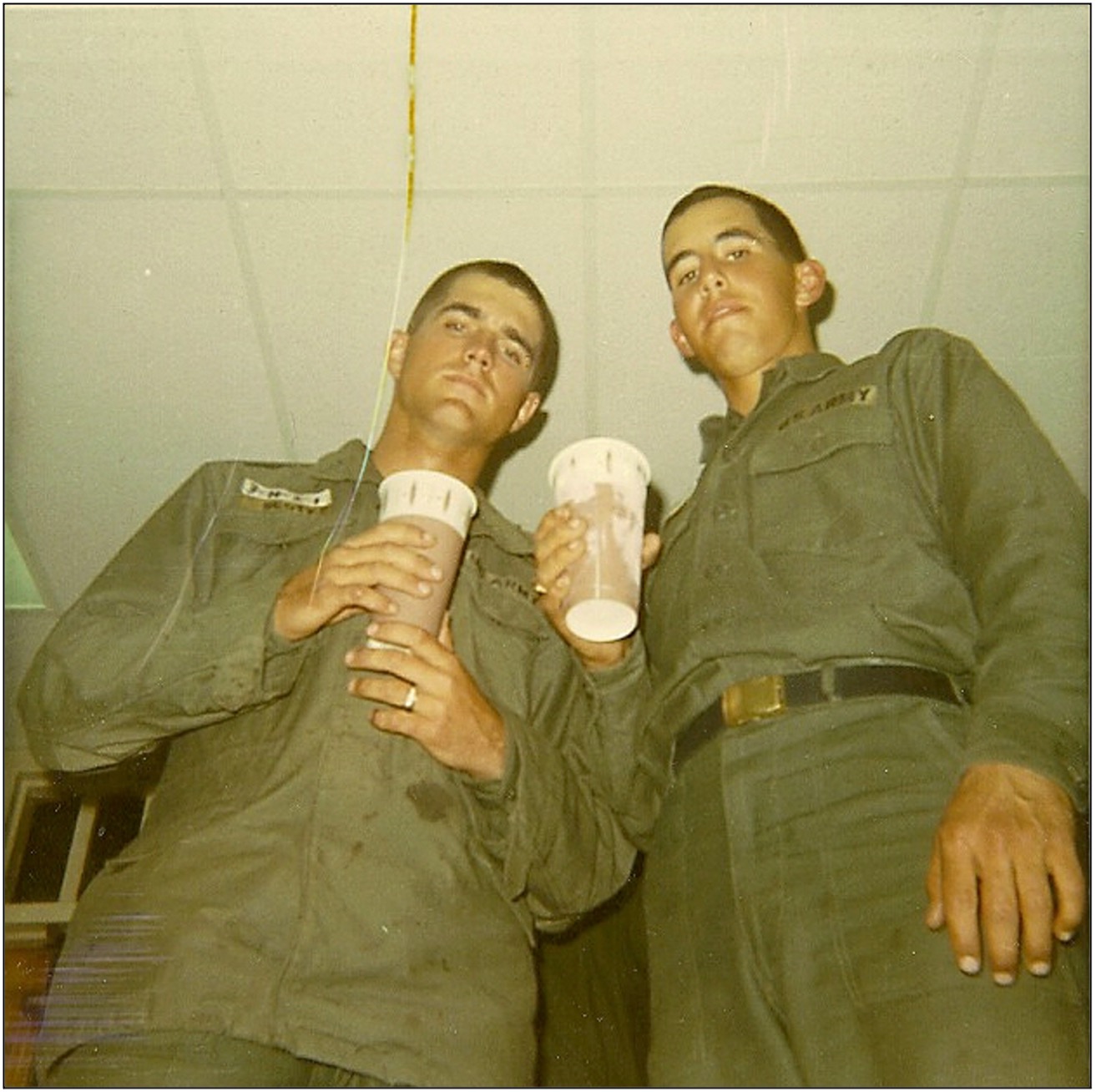 The above photo depicts Privates Jim Scott & John Harris at age 18 in Army Basic Training at Ft Ord.  Both were rewarded for qualifying as expert shots with the M-14 rifle.  Jim Scott would reenlist for the ASA (Army Security Agency) and our speaker was sent to Army W.O. Flight School.

As a helicopter pilot in Vietnam, John was directed to land an Army Huey on the USS Rupertus DD-851, a Gearing-class destroyer.  The destroyer was providing naval gunfire support off of South Vietnam.  John used his Sea Cadet experience which proved invaluable in combat.

As John concluded his presentation, he reflected back on his Sea Cadet experience and described what happened to the diesel submarines he had trained on.  All three submarines, the Raton SS-270, Blue Gill SS-242 and Charr SS-328 were decommissioned on 28 June 1969.  In 1971, the Blue Gill SS-242 was sunk and moored to the ocean bottom as a salvage trainer about one mile off shore of Maui, Hawaii in 130 ft of water.  For the next thirteen years, her hull was used for underwater rescue training.  In November 1983, the ex-Bluegill was raised and towed to deep water where she was sunk with military honors.

The USS Roncador SS-301, was decommissioned in December 1971.  It was initially saved from scrapping to be used as a memorial.  When the plans did not materialize, the submarine was put on display briefly in Redondo Beach, in 1976.  In 1977-78, the Roncador SS-301 was subsequently portrayed as the fictional submarine USS Sea Tiger — painted pink for the role — in the short-lived ABC situation comedy Operation Petticoat.  A second attempt was made by John to preserve the submarine when he contacted a local Southern California Congressman and requested that the submarine be saved as a memorial.  Although the submarine was not saved, its fairwater (commonly referred to as the conning tower) was finally placed on display as the centerpiece of the U.S. Navy Submarine Memorial located on the Pt. Loma Sub base in San Diego.   Therefore, the Roncador SS-301 has become “immortal”. 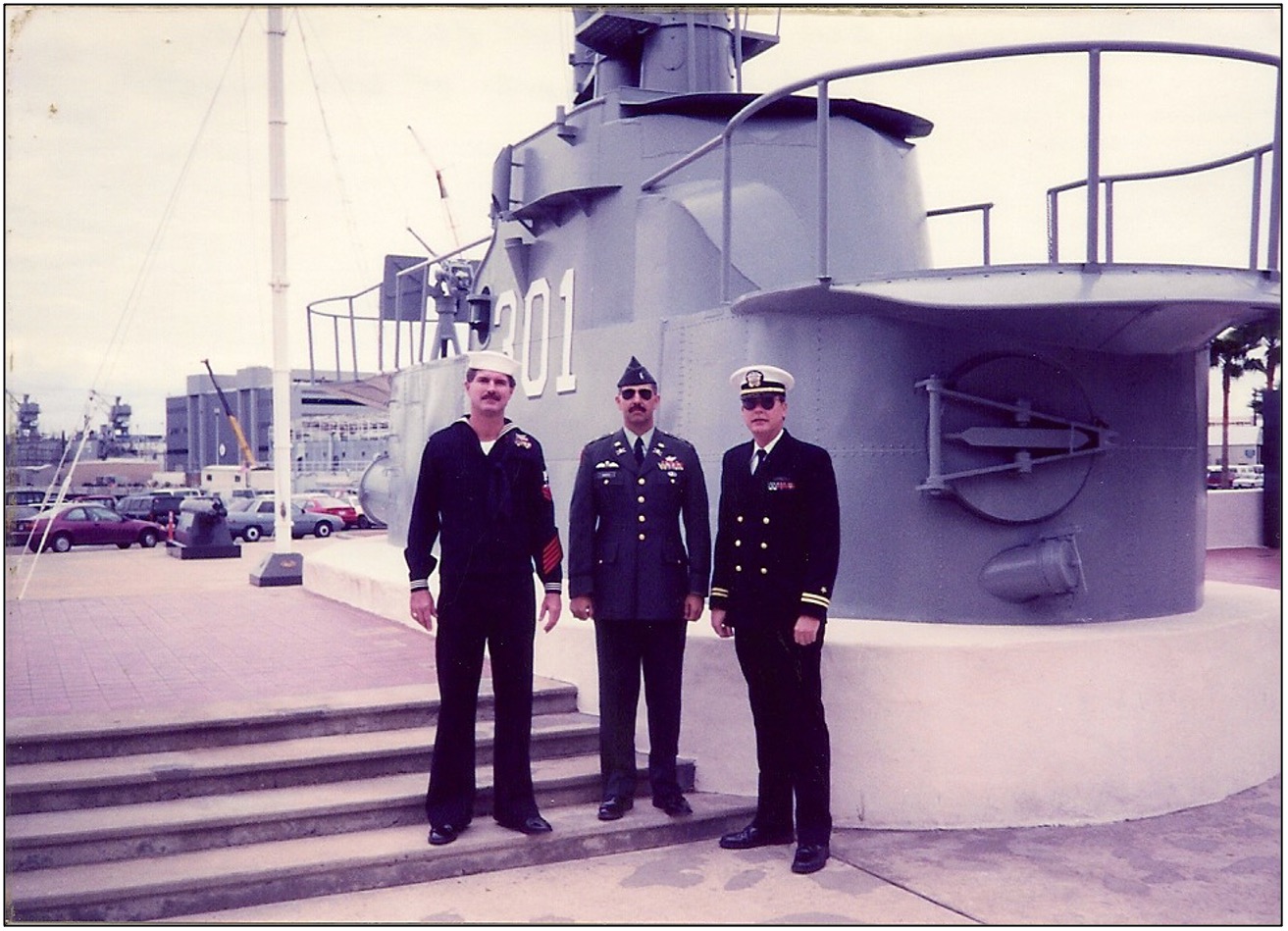 At the conclusion of the presentation, John Harris posed for a photo with the squadron commander and other members of the audience. 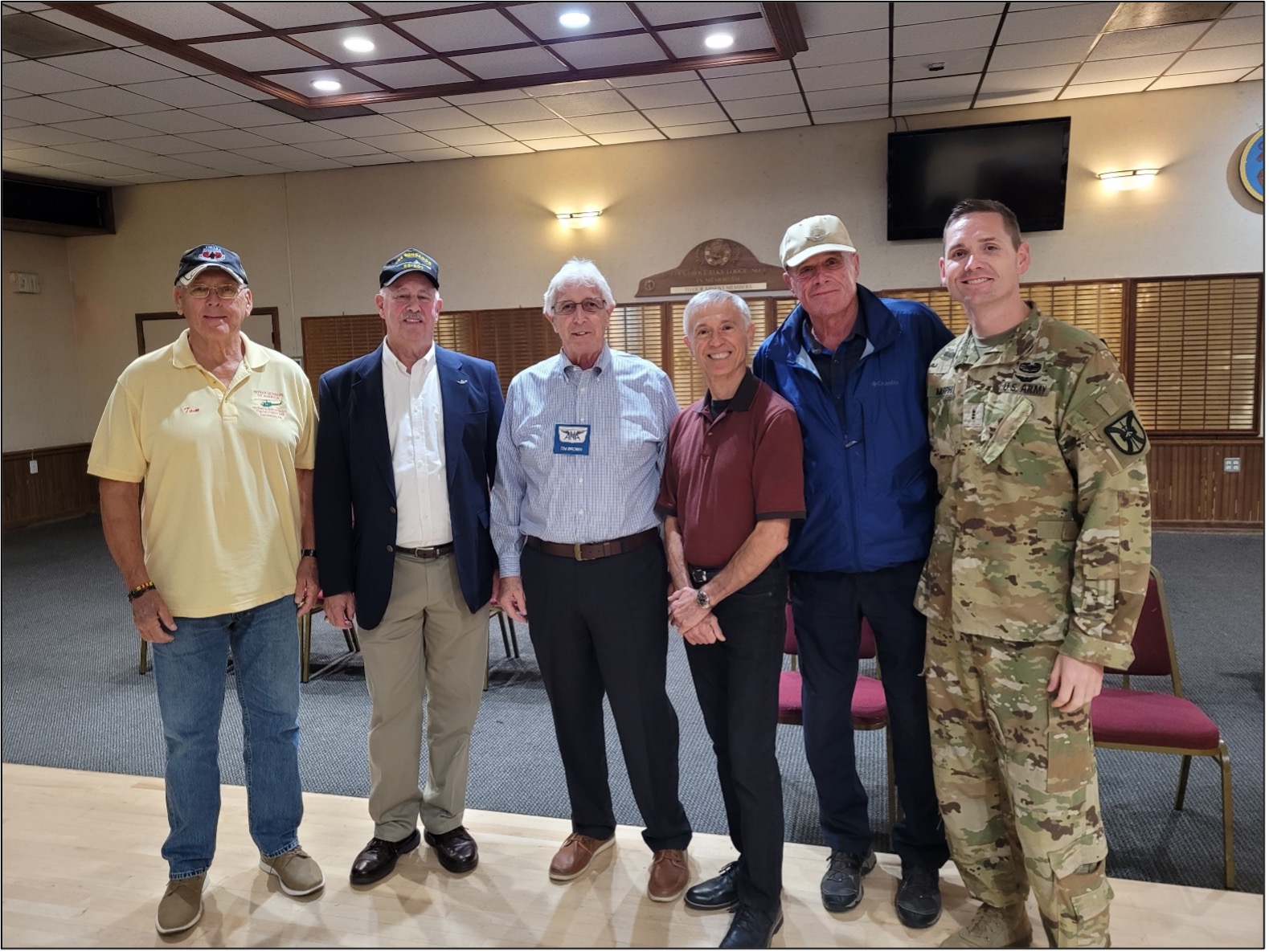