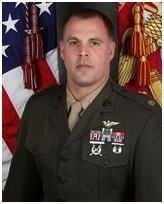 Major Thornhill was commissioned a 2nd Lt in June 17, 2002 after graduating from the United States Merchant Marine Academy with a Bachelor of Science in Maritime Operations and Technology. Then 2nd Lt Thornhill reported to The Basic School in Quantico, VA, where he graduated with A Company in June of 2003. He then reported to MATSG-21 in Pensacola for Naval Flight School. After completing training at NAS Whiting Field, then 1st Lt Thornhill became a winged Naval Aviator in November 2004, and was selected to fly the CH-46E Sea Knight. 1st Lt Thornhill headed to Camp Pendleton, CA to begin training in the CH-46E helicopter at HMMT-164. In April 2005, he checked into HMM-166 aboard MCAS Miramar, CA. 1st Lt Thornhill served with HMM-166 from April 2005 to March 2009, deploying twice in support of the 11TH MEU in support of Operation Iraqi Freedom. He was promoted to Captain in December 2006. During his tour with HMM-166 Capt Thornhill held the billets of Flight Line Officer, Current Operations Officer, and Ground Safety Officer, and earned the flight qualifications of Division Leader, Terrain Flight Instructor, Functional Check Pilot, and Night Systems Instructor. In April 2009, Capt Thornhill checked into 3d Battalion, 9th Marines aboard Camp Lejeune, NC, and attended Tactical Air Control Party Course to train as a Forward Air Controller. During the summer of 2009 Capt Thornhill deployed with 3/9 to Iraq’s Al Anbar Province attached to India Company. Then in January 2010 Capt Thornhill temporarily transferred to 3d Battalion, 2d Marines as the Battalion Air Officer. Here he deployed with the 22D MEU in support of the humanitarian assistance mission Operation Unified Response in Haiti. In August 2010, Capt Thornhill executed orders to MAG- 26 aboard MCAS New River, NC, and served as the MAG-26 Current Operations Officer until March 2011, and then completed MV-22 transition flight training at VMMT-204 in July of 2011. Capt Thornhill then executed orders to VMM-166, MAG-16 aboard MCAS Miramar, CA. Major Thornhill served with VMM-166 from September 2011 to February 2015, where and held the billets of Quality Assurance Officer and Maintenance Officer, and earned the flight qualifications of Section Leader and Functional Check Pilot. He was promoted to Major in August 2013, and deployed with VMM-166 (REIN) in support of the 13TH MEU from August 2013 to April 2014. Major Thornhill then reported to I MEF to serve as the Assistant Fires Officer for Task Force Al Asad 15.2 from February 2015 to May 2016. There Major Thornhill served as the Air Officer and lead JTAC during a nine-month combat deployment to Al Asad, Iraq. In May of 2016, Major Thornhill reported to VMM-164 at MCAS Camp Pendleton. Here he has served as Logistics Officer, Operations Officer, Executive Officer, and attained the qualification of Low Altitude Tactics Instructor. His personal awards include the Navy Commendation Medal with gold star in lieu of third award, the Navy and Marine Corps Achievement Medal with gold star in lieu of second award, and the Humanitarian Service medal with gold star in lieu of second award.