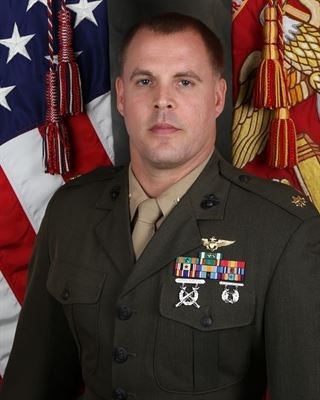 On Nov 9, 2017, the Grampaw Pettibone Squadron was honored to have as its guest speaker, Major Alan B. Thornhill USMC. The Major provided the audience with an overview of his military experience and emphasis on his involvement with and the history, characteristics and function of the Bell Boeing V-22 Osprey tiltrotor aircraft.

The Major opened his comments briefly reviewing his background, recent assignments, and initial pilot training flying the CH-46E Sea Knight helicopter before transitioning to the USMC version, which is designated the MV-22. Our speaker noted his almost 6 years flying the MV-22 and just under 1000 hours of pilot time in the aircraft. The Major became very familiar with the MV-22 during his duty as Maintenance Officer with HMM-166. His previous duty with HMMT-164 was the last west coast unit to transition to the MV-22. It is a 2 year process to transition aircraft. There are a total of 16 Fully Operational Capable MV-22 squadrons and 1 training unit. The first operational deployment for the USMC was in Iraq in 2007. The aircraft supports Marine Expeditionary Units (MEU) on the East Coast, West Coast, Afghanistan, Kuwait and Special Purpose in Spain.

The formal presentation began with a graphic overview of the history of V/STOL aircraft. Reference was made to a book on the history of the V-22, “The Dream Machine: The Untold History of the Notorious V-22 Osprey.” The Major presented an outline that included: Mission, Capability, Aircraft Profile, Survivability, Operations and Future. The MV-22 Mission provides the USMC a medium lift assault support aircraft. Assault support provides transport for: Combat Troops, Supplies and Equipment for day or night time operations. As part of the presentation regarding missions, the aircraft is: Sea and Shore Capable, Combat Transport, Air Delivery, Tactical Aircraft Recovery, Air Evac, Rapid Insertion and Extraction, Aviation Delivered Ground Refueling, Battlefield Illumination and Airborne Command and Control Platform. 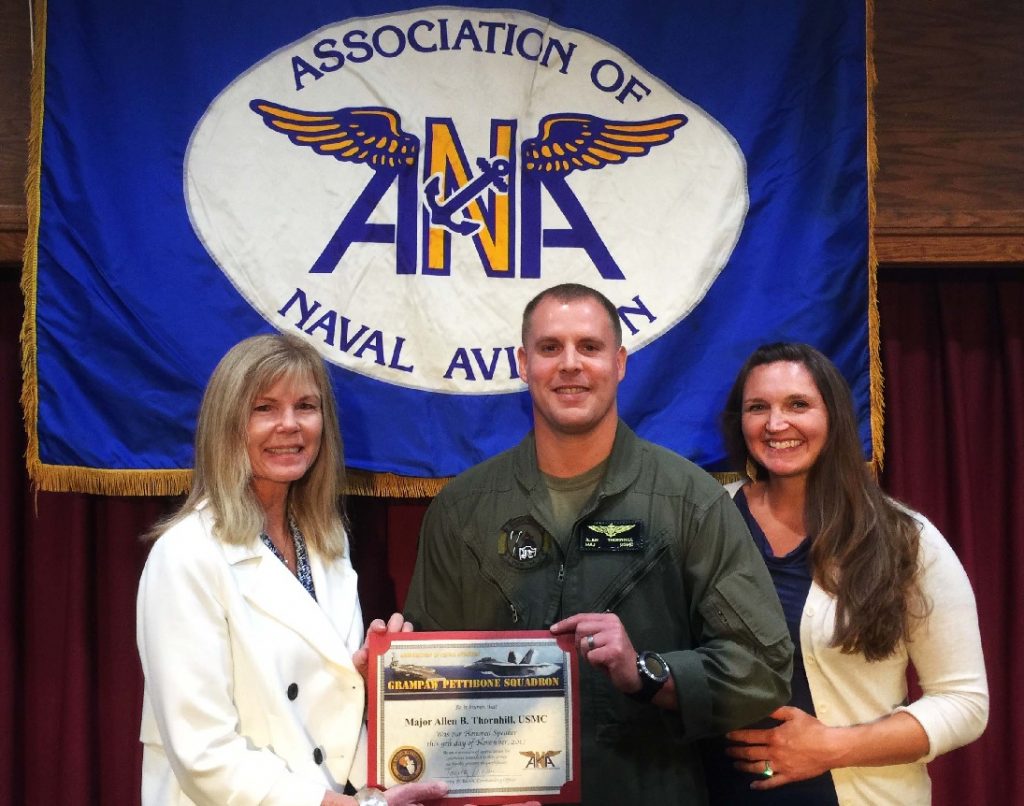 Though capability does allow for vertical take-off, 90% of the time activity results in traditional airplane mode. A 24 seat capacity, all though it’s a tight space with personal equipment. It’s able to carry both internal and external cargo and with basic internal fuel enabling a 3 hour mission range. Internal cargo loads up to 10,000 lbs and external loads as much as 12,500 pounds in a sling load can be carried. Operational missions in Afghanistan were between 90-330 nautical miles from 25 minutes to 1 hr 25 minutes duration. While air-to-air refueling can extend missions to considerable distances, trip duration may be limited due to lack of crew facilities onboard. A combat load of 18 personnel with equipment, cargo or vehicles can be transported depending on mission. Configured as a medivac system will carry 12 litters.

Aircraft design, dimension and landing characteristics, requires a significant landing and takeoff footprint. The MV- 22 is 57 feet long and wing span including blade length in vertical mode, extends dimension to over 85 feet. Normal operations with a single aircraft is 100×100 landing zone, increasing in reduced visibility environment to 200×200 feet. Multiple aircraft operations can increase the landing zone to 1200×1200 in low visibility. The aircraft normally operates at 240 knots indicated for cruise to 260 knots for tactical conditions. A 13,000 foot operating ceiling limit is due to oxygen requirements for passengers. When in a vertical mode, the MV-22 will burn up to 4000#/hr between 0-60 knots airspeed. Conversion mode when moving from vertical to forward flight, the aircraft burns up to 3000#/hr at 120 knots. Airplane mode uses 2400-3600#/hr and cruises at sea level at 220-240 knots. Based on these numbers a typical 3 hour mission operating between 10-15,000 feet can be expected. 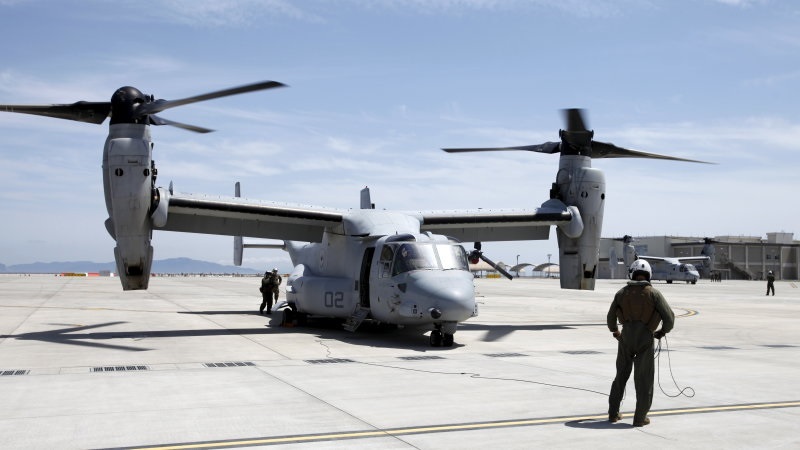 Any mission involving rapid insertion or extraction using fast rope/rappel or carrying external loads becomes a challenge due to the amount of downwash from the blades in vertical mode. The first member must maneuver the rope to minimize the effect of the downwash into a more vertical position or risk compromising the movement of personnel or cargo. Other missions enable paraops static line or freefall operations.

Onboard communication is comprised of UHF/VHF, SATCOM and GPS Repeater. An additional system is a unique troop commander situational awareness map, for real time or near real time area activity to support time sensitive missions. One system is the DWS (Defensive Weapon System), belly mounted mini-gun for self-defense. When landing in desert conditions, the proprotor downwash reduces visibility creating significant operational limitations. Using a 1-5 rating, where 5 indicates no ground reference, the crew must maintain a high level of vigilance in completing a landing. Some automated features may be utilized to assist landing if available.

The Major noted that due to the speed of the MV-22, mission standards may have the aircraft arrive after air support neutralizes opposition and before rotary units are on scene. Mission cruise is set at 240 knots ground speed till 3 miles from the LZ, speed is reduced and altitude decreases to arrive on scene in about 2 minutes. Describing the survivability features of the MV-22, the Major noted a combination Aircraft Survivability Equipment (ASE) that includes flare canisters a well as crew served defensive weapons systems, such as M240D 7.62 minigun, GAU-17 DWS 7.62mm or GAU-16 .50 caliber machine gun.

Future capability may include MV-22 as a refueler, a forward firing remote weapons system and enabled communication features that increase aircraft and crew capability.

At the end the Major took questions from the  audience. Questions ranged from current USMC inventory, use as an aircraft for POTUS, the downwash comparison with CH53E, engine loss operations, battle damage history and engine survivability under dusty conditions. A few of the answers noted a 300+ aircraft in the USMC inventory, the MV-22 downwash of 120 knots compared to 80 knots for the CH-53E, a composite body that does require vigilance in avoiding battle damage and a limit of 30 seconds in dusty conditions to protect aircraft engine operation.