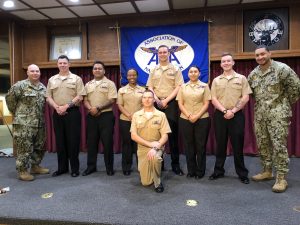 The Sailors of the Quarter (October thru December) from the Naval Weapons Station., Seal Beach , were special guests at the March meeting of the Grampaw Pettibone Squadron.  When Certificates of Appreciation were presented to the honorees by the Squadron, they were assisted by Chief Petty Officers from the base:  Senior Chief William Lyons, GMC Jeff Vance, and MAC Chris DeLawrence.

Attractive plaques were presented by the USAA Insurance Company to each Sailor of the Quarter.  Grampaw Pettibone Squadron, affiliated with the Association of Naval Aviation, meets each month at the Elks Lodge in Garden Grove.