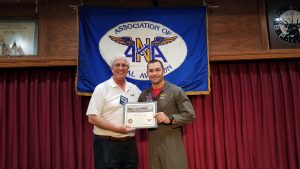 The Grampaw Pettibone Squadron at their June meeting was honored to have Commander Todd A. Pike, Commanding Officer, HSC-6, share his career, knowledge and experience of the aircraft flown. Additionally, he reviewed the support equipment , personnel and missions attached to his command with Helicopter Sea Combat Squadron 6, flying the Sikorsky MH-60S Seahawk.

CDR Pike began his talk by showing a YouTube video which provides an overview of the Helicopter Sea Combat (HSC) Squadrons and the capability contained within the unit. HSC is more than a combat unit. It provides resources to support; anti-surface warfare, which is concerned with the suppression of surface combatants. Additionally, the squadron supports air sea rescue, supply of seaborne vessels by helicopter or VERTREP, special operations, integrated and counter unmanned aerial systems operations, amphibious task force defense, humanitarian assistance and relief. HSC is a comprehensive, full service capability that combines technology, integrated training and mission critical tools as needed. The video included a series of interviews with personnel summarizing the above noted assignments that are carried out by the pilots, crew and support staff of the HSC organization.

Following the video, CDR Pike provided an outline of his military career beginning with his graduation from the US Naval Academy.   With no prior flight experience, he completed primary, intermediate and advanced flight training at NAS Pensacola. The CDR was then assigned to NAS Corpus Christi then returned to Pensacola before being sent on to San Diego where he was assigned to fly the MH-60S. CDR Pike noted that the MH-60 aircraft replaced the well known Bell Huey in other branches as a multi-purpose helicopter platform.

After San Diego, the CDR’s first assignment for three years was in Guam. While there, CDR Pike flew in support of the tsunami relief efforts in Bande Ache, Indonesia, then attended and graduated from the Rotary Wing Weapons School, similar to the Navy Top-Gun program before returning to Guam for an additional two-year assignment.

Upon completing his second overseas post, the CDR returned to the states for additional assignments before attending and graduating from the Naval War College after one year.  CDR Pike was deployed both nationally and internationally in direct support of Joint SOF units to include SEALs, MARSOF, Army ODA, Australian SOF forces and others.  Special Operations Forces (SOF) are those active duty and reserve component forces of the military services designated by the Secretary of Defense (SECDEF) and specifically selected, organized, trained, and equipped to conduct and support special operations.   While SEAL team duties are generally known, MARSOF, are the Marine Special Operations Force and generally follow operations assignments noted in other branches. Operational Detachment Alphas (ODA) are associated with SOF operations and comprised of a small versatile team for a variety of operations.

The CDR spent two years on assignment at Joint Forces Command Brunssum in the Netherlands and enhanced his international operational knowledge and skill.

Upon returning to the states, the CDR was inserted into the training pipeline and reacquired his flight skills, became Executive Officer (XO) for HSC-6 followed by assuming duties of the Commanding Officer of HSC-6 beginning in April 2019.

The HSC community is a ‘Master of All Trades’. Operationally, they touch on many of the assignments noted in other communities and other services. In the area of specialization, the HSC operation conducts many of the same jobs as individual operations with the exception of sub hunting. While this existed in the past, the operation was redistributed to other groups with the removal of on-board sonar systems.

The HSC operation is either carrier based deployment or expeditionary based assignment.  Carrier based is an eight ship operation with six aircraft assigned to nuclear powered aircraft carrier (CVN) and two assigned to a naval replenishment ship (CLF).   Expeditionary based assignments of two to four aircraft are assigned to amphibious vessels (i.e., LHD, LHA, LPD and/or LSD), Littoral Combat Ships along with an MQ-8 Firescout UAV, hospital ships, supply ships or assigned to forward ground based operations. Additionally, a half reserve and half active component supports SOF specifically.

In referring to the video, the CDR indicated that one version of the H-53 helicopter is used for mine sweeping operations (HM) but may be replaced by the H-60S helicopter.

The CDR was confident in noting the squadron operations were as capable for SAR (search and rescue) as the Coast Guard and combat search and rescue and personnel recovery as good as the Air Force. The unit can provide offensive as well as defensive support with the 20 millimeter (mike-mike) weapon system, Hellfire missiles or laser-guided rockets as any fixed-wing operation. Additional potential in delivering logistics support to include non-combat and combat related supplies.   Confidence in providing humanitarian assistance is a feature that is not generally associated with military operations.

One non-traditional feature of the squadron is providing support for CAL FIRE in the local area around San Diego, with vertical lift capability in collecting and dispersing water from sling loaded nylon buckets over assigned areas engulfed by fires.   This operation occurred in 2007 with FLIR (Forward-Looking InfraRed) capability for night-time operations in the local area. Additional support was carried out in 2019, north of Los Angeles in the Pt. Mugu area with similar services.

The CDR was asked about organizational size, both aircraft and crew.   The eight aircraft assigned to the unit are manned and supported by a force of some 256 personnel , with 36 officers and 220 enlisted personnel assigned to various administrative, maintainer, aircraft crew and supervisory duties.  HSC-6 was deployed aboard the USS Teddy Roosevelt from October 2017-May 2018. Recent assignment changes moved the unit to the USS Nimitz.

Mission assignments will dictate how the aircraft and crew are configured. Whether a supply/resupply mission or deploying a combat team, the aircraft and crew will be ready for the selected operation and confirm all features are prepared as needed.   Aircraft weapons could include rockets, guns, Hellfire missiles while future deployment may include torpedoes. Supporting assignments may call for a one-week readiness test, setting up the aircraft for either personnel transport, supply transport or close-air support including on-board weapons and expendable munitions. The CDR pointed out the preparation, planning and readiness for execution of the unit and staff makes this unit qualified, capable and ready for any task.

The Sikorsky MH-60S aircraft has a max gross weight of 23,500 pounds, 12 passenger capacity depending on auxiliary fuel, 5500 pound max external or 6000 pound max internal load.   Normal endurance at 100 mph is a 3 hour mission. An internal auxiliary fuel tank will support a longer range operation out to 3 ½ hours from average 2 hour range, however, total personnel on-board will be reduced by the added fuel requirements.  80-150 mph is a mission profile.

The presentation concluded with a second video which demonstrated the HSC operational capability in various missions. This was contained in the 2018 Navy HSC Community Video NHA Fleet Fly-In at Pensacola, FL.

Links to the videos and additional unit operations may be found at: