Trending
You are at:Home»Awards»June 2019 Sailors of the Quarter
By Bill Thompson - Chaplain on July 2, 2019 Awards, Sailor of the Quarter 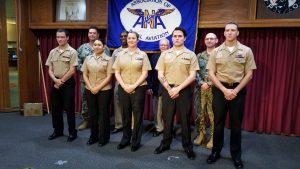 In the midst of the daily routine at the Seal Beach Naval Weapons Station, there is usually someone who rises above the average and catches our eye.  It is with the recognition of the Sailors of the Quarter that we honor those who deserve special recognition for a job well done.  Grampaw Pettibone Squadron, a chapter of the Association of Naval Aviation, at their regular June meeting, honored the persons who excelled during the recent quarter—January through March.  They are:

The Command Senior Chief for the Weapons Station, Paul Ellis; GMC Jamario Perry; and LCDR Jesse Alvarez participated in the presentation of the Certificates of Appreciation from GPS.

The Grampaw Pettibone Squadron meets on the second Thursday of each month at the Elks Lodge in Garden Grove.