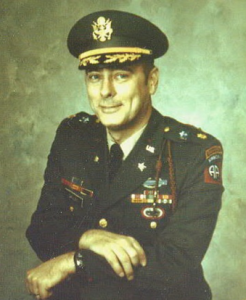 Action Taken: Mess with the Enemy’s Mind (Psychological Operations as a Tool of Warfare)

Major Hammond Salley will talk about the much unappreciated and misunderstood merits of Psychological Operations (PSYOPS) as a combat multiplier. Essentially, ‘Words at War’.

Major Salley attended the University of Florida where he received an Army ROTC commission in the Infantry. During the next 21 years, he served in assignments throughout the United States, two tours in Germany during the Cold War and two tours in Vietnam. Hammond has served in Armored, Airborne and Mechanized Infantry Divisions as well as Special Operations units. He is Airborne, Ranger and Special Forces qualified.

In 1967, he was the Assistant Operations Officer of both the 6th PSYOP Battalion and the 4th PSYOP Group and was in Saigon when the TET Offensive commenced in January 1968. Then, as a member of a Top Secret black operations unit, Hammond was sent to Forward Operations Base-3 at the Khe Sanh Combat Base during the 77 day Siege of Khe Sanh.

Major Salley is one of the very few Army officers privileged to have been awarded a Navy Presidential Unit Citation for his association with the 26th Marines during this historic battle which his organization received for their substantial contribution to the success of American forces in holding off the massive North Vietnamese force in the siege of Khe Sanh.