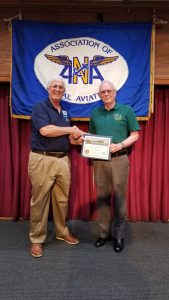 The Grampaw Pettibone Squadron at their July meeting was privileged to have Hammond McKie Salley , Major, US Army, Infantry (Ret), share his experience regarding the use of Psychological Operations (PSYOPS) as a combat multiplier.

Mr. Salley began his presentation by noting that his background in the military began from an early age, as a dependent of a career Army officer.   He described himself as a ‘Proud Army Brat’ and shared one definition of the term – ‘British Regiment Attached Traveler’ to identify family dependents travelling with service members.

As a dependent, Hammond lived in six locations in the U.S. and overseas and attended seven different schools. Living in multiple locations prepared him for his Army career which took him to ten locations, including serving twice with duty assignments in Germany and Vietnam.   The association with the military continued with our speaker’s two brothers both serving in the Army and both his sons serving. One son as a career Air Force officer after graduating from the Air Force Academy and the second son graduating from West Point and serving in the US Army.

After retiring from the Army, our speaker had a second career at McDonnell Douglas /Boeing as a member of the C-17 Design Team and a special C-130 replacement project.

Following a review of his family and civilian career background, Mr Salley’s presentation began by describing his assignments in the US Army. Beginning as an infantry officer, he is to close and destroy the enemy by the application of violence. However, as a PSYOPS warrior, one utilizes non-violent methods to help win over or confuse the enemy through information sharing, persuasion and influencing emotions, attitudes, opinions and actions.

Hammond described how words and ideas have the power to influence events. By appealing to the thoughts or attitudes of the opposition in a timely manner, it is possible to change their perception of events.   By focusing on the base needs of an opponent it is sometimes more effective than trying to defeat them through physical means where they are more resistent and less cooperative. Hammond shared a statement attributed to Napoleon Bonaparte– “There are two powers in the world, the sword and the mind. In the long run the sword is always beaten by the mind.”  Psychological Operations focus on meeting the needs and wants of the opposing force and target the ‘Hearts and Minds’ to achieve a non-violent end result in defeating or neutralizing the enemy. While this approach may take time, western philosophy too often seeks immediate answers and leaders in the field are seeking quick results. This works contrary to intended results and does limit the opportunity for success in programs.

Our speaker explained some of the methods utilized in communicating and disseminating information for PSYOP Operations during the Vietnam era. The following list is an overview of such methods; Face-to-Face, Leaflets, Pamphlets, Posters/Banners, Audio Message by Loud Speaker either live or taped, Movies, Radio/TV broadcasts, Newspapers/Magazines and other means.

The type of material and method of delivery proved useful as it determined how the message could be effectively dispersed when dropped by aircraft or fired by artillery over populated areas. The weight, size and dimensions of paper products used for leaflets or pamphlets was analyzed and results dermined the most cost effective and efficient way to disperse the message.

Developing an approach to communicate a message that has a hopeful chance of success must consider a number of factors. Utilization of leaflets for example will require that the message focus be well thought out. The purpose must be spelled out and communicated to forces carrying out the mission. A plan needs to be thorough and detailed for the administering force. Identification of the audience will determine the message and method.   Consistency in communication and follow-up will reinforce the desired outcome. For a target audience that is illiterate, the use of pictures proves more useful and must be accompanied by explanation.

Hammond noted that some messages should be delivered to focus on the key communicators located in a hamlet, village or in the field. Address the educated members first in order to create a support role. Unfortunately, during the Tet Offensive in 1968, many of the community members who were educated and capable of being a dependable source were the first to be executed by the enemy.

Some messages created in Vietnam included a; ‘Safe Conduct Pass’, ‘Open Arms’ or ‘Chieu Hoi’ program , signed by the South Vietnamese President. The messages were dropped by aircraft or helicopter, offering a reward if the enemy put down their weapons. It was estimated about 110,000 enemy surrendered saving the U.S. about $100,000,000 in ammunition costs.   Some who surrendered and were rewarded soon returned to fight another day and surrender again. Programs were created to identify all who participated and confirm they were not participating multiple times.

Other messages warned residents that bombs would fall and they should surrender. If they did not clear the area, bombs did fall. Another message was dropped offering gold in exchange for returning downed pilots. However, the initial message did not indicate the airmen must still be alive when returned. The message was corrected and continued.

One method to communicate with residents and enemy fighters was to drop small compact radios that were assembled with a single preset radio frequency.   The radio was packaged in a styrofoam container, included batteries and instructions for use. The radio message was to be positive and offer a way to surrender and be rewarded without risk.

Some programs were not thoroughly developed and the translations resulted in a negative and counter-productiive set of circumstances. Our speaker shared an incident involving an Australian team having a leaflet translated. The message was to say: ‘We want to be friendly rather than killing you’. When a reporter obtained a copy and had it translated, it read instead: “We would rather be humane than killing you’.   This resulted in significant issues in the field as well as at the Ambassador level.

The communication programs that were developed are categorized as; White, Gray or Black Propaganda.   White comes from known, openly identified sources, which are considered gentle persuasion, such as ‘Safe Conduct Pass’. Gray has no known source or author and is deliberately ambiguous. An example is to make the enemy believe a falsehood using appropriate arguments. Someone believes argument ‘A’. Release argument ‘B’, which is the opposite of ‘A’ and released to friendly forces.   Insure ‘B’ falls into enemy hands and the enemy assumes ‘B’ is true. Black is introduced to disguise origin and made to appear it comes from one source, when in fact it comes from another. An anti-communist operation from the North is actually a planted program from the US.

Disinformation campaigns were also introduced by North Vietnam, VC, Soviet and Chinese sources to counter American programs. Local populations who have limited literacy and purchase goods based on the image appearing on the package are targeted to believe Americans are cannibalistic. This occurs by displaying bags of rice with an image of rice, bags of beans, showing beans and jars of baby food, with an image of a white baby on the label. Other programs appealed to US forces that were minority and led to believe the US government was sacrificing the minority for corrupt big business. 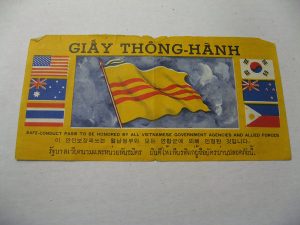 Similar information campaigns were introduced in Afghanistan, Bosnia and Iraq to counter the opposition in place both in the field and within the local government.   This included; ‘Safe Conduct Passes’, Rewards that ask for locals to reveal the location of opposition leadership, and programs that disclose corrupt local leadership and how they abuse the people.

In closing, our speaker shared an age old adage, ‘The Pen is Mightier Than the Sword’. Information controls thought and thought controls action.