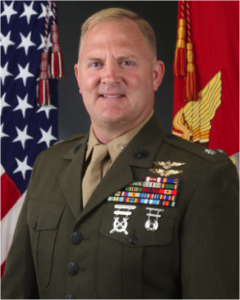 With all of the potential security threats in the world, we cannot forget the island nations closest to China.  Perhaps the first line of defense for the free free world in the region, may be the home island archipelago of Japan. To secure this bastion, American forces reinforce their Japanese counterparts. Among these reinforcements is Marine Corps Air Squadron 232, commanded by LtCol Mark Bortnem. Squadron Commander, LtCol Mark Bortnem, will describe his role, and that of his combat organization in helping to secure the line that contains the growing menace of communist China’s expansionist ambitions in the western Pacific.

LtCol Mark Bortnem enlisted in the Marine Corps in 1991 and served in Camp Lejeune, NC as a Supply Administration and Operations Specialist with 2d Force Service Support Group. In 1994, Cpl Bortnem was selected for the Marine Enlisted Commissioning Program and further assigned to The Ohio State University. In 1998, he graduated with honors, earning a Bachelor of Arts degree in Political Science and was then commissioned as a 2ndLt.  In 1999, 2ndLt Bortnem was an honor graduate from The Basic School and reported to Naval Aviation Training Command in Pensacola, FL for initial aviation training. While in Pensacola, 2ndLt Bortnem was assigned to VT-4 and VT-86. In 2001, 1stLt Bortnem graduated with distinction and was designated as a Naval Flight Officer. Completing F/A-18 training in 2002, Capt Bortnem was designated as a F/A-18 Weapons System Officer and assigned to VMFA(AW)-332 in MCAS Beaufort, SC. While with the Moonlighters, Capt Bortnem was assigned as a Schedules Officer, Airframes Officer, Quality Assurance Officer and Admin Officer. He also earned the qualifications of Air Combat Tactics Officer and Forward Air Controller (Airborne). During this time, Capt Bortnem deployed twice- once to MCAS Iwakuni as part of the Unit Deployment Program and once to Al-Asad Airbase where he flew combat missions in support of Operation IRAQI FREEDOM.  In 2006, Capt Bortnem was selected for Transition/Conversion training and reported to Primary Flight Training with VT-27 in Naval Air Station Corpus Christi. After graduating in 2007, he was assigned to Advanced Flight Training with VT-21 in Kingsville, TX. In 2008, Major Bortnem graduated with distinction, was designated as a Naval Aviator, and was then assigned as a T-45 Flight Instructor as part of the SERGRAD program. In 2010, Maj Bortnem reported to MCAS Miramar where he completed initial F/A-18 training and was assigned to VMFA(AW)-121. While with the Green Knights, Maj Bortnem was assigned as the Admin Officer and Executive Officer. During this tour, he earned the qualifications of Division Lead, Mission Commander and Forward Air Controller (Airborne) and also deployed to MCAS Iwakuni Japan in support of the Unit Deployment Program. Maj Bortnem also served as the Operations Officer for Marine Aircraft Group 11 from 2013-2014. Maj Bortnem was selected to represent the Marine Corps as part of the Personnel Exchange Program and he reported to Cold Lake, Alberta, Canada where he served as an exchange officer with the Royal Canadian Air Force. During this time, LtCol Bortnem was assigned as the Deputy Commanding Officer for 409 Tactical Fighter Squadron and deployed to Al-Jaber Kuwait where he flew combat missions in support of Operation INHERENT RESOLVE. In 2015, LtCol Bortnem was assigned to 401 Tactical Fighter Squadron where he served as Squadron Weapons and Tactics Officer and Commanding Officer, becoming the first US officer to command a Canadian tactical unit. In 2016, LtCol Bortnem was assigned to Marine Corps Forces Pacific in Camp Smith HI, where he was assigned as the Air Officer and Director of the Aviation Operations Section. LtCol Bortnem joined MAG-11 in February 2018, serving as the Headquarters Commanding Officer. LtCol Bortnem has flown over 2000 hours in the F/A-18, more than 500 of which have been in combat. His personal awards include the Meritorious Service Medal (with 2 Gold Stars), the Air Medal (with numeral 6), the Navy Achievement Medal (with 4 Gold Stars), the Good Conduct Medal, and various unit and service awards.