The Grampaw Pettibone Squadron at their October meeting was honored to have Lt. Col Mark Bortnem, introduced by the Squadron Commander Tim Brown.  Lt. Col Bortnem shared his career experience in the United States Marine Corps which began in 1991 and continued to the present day, currently serving as Commanding Officer of Marine Fighter Attack Squadron 232, “Red Devils”.

Lt. Col Bortnem opened his remarks by thanking the audience for their service and conveyed how much in awe he was when given the opportunity to speak to an audience representing veterans from WWII to the present day.   He expressed appreciation for the roles played in the past to enable today’s service personnel to have a model to follow and a responsibility to fulfill that was only possible due to the contributions made by people represented in this audience.

On a light hearted note, the Lt. Col commented that he was going to speak on his favorite subject, himself.  As a 49 year old commanding officer, he is the oldest member of his squadron and that of his Air Group, MAG-11, but probably the youngest man in the room during his presentation. He became an emancipated minor at age 16, after his parents petitioned the courts to legally release our speaker from parental control, due to his own actions of being uncontrollable. After gaining his independence the Lt. Col commented that he took a wrong turn in life, was homeless for a little while and dropped out of high school at age 17.   In 1991 at the age of 20, he entered a Marine Corps Recruiting Office and attempted to enlist. Enlistment only occurred after he followed the recruiter’s instructions and acquired a GED. The Lt. Col noted that when he speaks to Marines and Sailors he leads, he will tell them that they are more talented at that point in their lives then the Lt. Col was when he first entered the Marines. If the Lt. Col can grow up to become a fighter squadron Commanding Officer, they can grow up to become anything.

Lt Col Bortnem told the audience that his graduating from Second Recruit Training Battalion at Parris Island was the first positive thing he succeeded in his life at that point. Following guidance from his recruiter, who told him to just apply himself, upon completing boot camp he was meritoriously promoted to Private First Class. He was first assigned to Ground Supply Administration, which he loved. The Lt. Col shared with the audience that his recruiter told him that in the service he would either be a cook or a drunk. Since he was neither, he loved his assignment. The Lt. Col spent a couple of years in Ground Supply Administration before being assigned to the fleet and attended MOS school, where he finished number one and was meritoriously promoted to Lance Corporal. After being assigned to a fleet position, through a combination of hard work and luck, our speaker was meritoriously promoted to Corporal. Our speaker noted that his advancement in the service occurred in only 11 months and put him in a position of responsibility without knowing a whole lot. His education in the Marines taught him very early to ask questions of those both above you as well as below you, in order to be successful.   Our speaker noted that in his current role, he tries to stay humble and encourage the same philosophy of those he commands to ask if one does not know the answer.

The Lt. Col was selected in 1994 to attend MECEP(Marine Corps Enlisted Commissioning Education Program).  Although a native of Michigan, he began his studies at The Ohio State, when he was not accepted at the University of Michigan. Finding his way at the university and his program, our speaker applied himself and graduated with honors in 1998 with a degree in Political Science.

Upon completing his degree, then 2nd Bortnem began attending the Basic School for Marine Corps officer training. Standards at the Basic School were changed under the new commanding officer.   Previously, aviators were able to automatically select flight assignments upon graduation.  The change only had the top graduate able to select their first assignment.  As an honor graduate our speaker selected to be an aviator, even though he did not meet the vision requirements.  The Platoon Commander in the class told him he did not qualify. However, our speaker reminded the Platoon Commander that the orders stated the top graduate could select any assignment.  As a result of that order, 2nd Bortnem was given a letter by the Commanding Officer of the school, approving his Flight Officer training selection with a waiver for all the tests to begin training as an NFO at Pensacola. A subsequent operation corrected the vision issue.

Our speaker as a 1st graduated with distinction from NFO school VT-86 in 2000 and was qualified to fly Strike Fighters. He then proceeded to join VMFAT-101 at Miramar where in 2001 he qualified as an F/A-18, Weapons and Sensors Officer(WSO).

Following his training as a WSO, Capt Bortnem’s first assignment was VMFA-332, “Moonlighters” at MCAS Beaufort, SC. He served with the unit from 2002-2006 and was on two deployments, one as part of the UDP(Unit Deployment Program) to Iwakuni, Japan in 2003 and the second assignment in combat supporting Operation IRAQI FREEDOM (OIF) from 2005-2006. 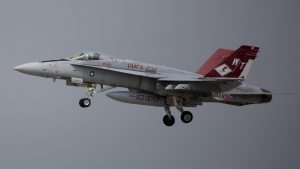 Both overseas postings were as a WSO and our speaker was selected and transitioned to pilot training in the F/A-18 upon return to the US in 2006. Capt Bortnem commented that pilot training provided a different view than just seeing the helmet of the pilot in the front seat. The Capt believed he was as capable and qualified to be a front seater as any other pilot in the unit.   Pilot training took place at Corpus Christi in VT-27 and after graduating, he moved on to advanced training at VT-21 in Kingsville, TX.

In 2008, then Major Bortnem graduated with distinction, was designated as a Naval Aviator, and assigned as a T-45 Flight Instructor which was part of the SERGRAD program from 2008-2009. Lt. Col Bortnem expressed a profound enjoyment serving as an instructor when he observed a trainee, “watch the light bulb go on”, when they were able to demonstrate and understand the practical application of the theory training they were receiving.

In 2012, our speaker joined VMFA-121,”Green Knights”, flying the F/A-18 and also taking on his first unit leadership role as XO. Our speaker commented that he was in the unit when it had “real airplanes and not magic unicorn airplanes”, the F-35. This aircraft subsequently replaced the F/A-18 after the Lt. Col left the unit. During his assignment with the unit, he was assigned to Iwakuni, Japan.

Returning to the U.S., then Major Bortnem became the Operations Officer for MAG-11 and remained in that assignment from 2013-2014.

In 2014, Maj Bortnem was selected to represent the Marine Corps as part of the Personnel Exchange Program and he reported to Cold Lake, Alberta, Canada where he served as an exchange officer with the Royal Canadian Air Force.  During this time, Lt. Col Bortnem was assigned as the Deputy Commanding Officer for 409 Tactical Fighter Squadron and deployed to Al-Jaber Kuwait where he flew combat missions in support of Operation INHERENT RESOLVE.

In 2015, Lt. Col Bortnem was assigned to 401 Tactical Fighter Squadron where he served as Squadron Weapons and Tactics Officer and Commanding Officer, becoming the first US officer to command a Canadian tactical unit. As a result of serving with a foreign force, the Lt. Col did not receive an annual evaluation or fitness report from the Marine Corps.   With no FITREP created, Lt Col Bortnem would not appear on a command board for promotion consideration.

In 2016, Lt. Col Bortnem was assigned to Marine Corps Forces Pacific in Camp Smith, HI, where he was assigned as the Air Officer and Director of the Aviation Operations Section. While serving in this role, the Lt. Col met the new Marine Corps Commandant, General David H. Berger and commented that he felt the General was going to fundamentally change the role between the US Navy and US Marine Corps in a positive way. 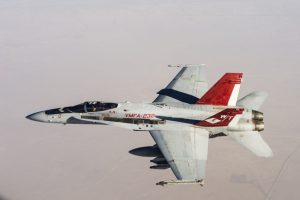 The Lt. Col felt that, after not appearing on a command board for three years following his foreign assignment, his Marine Corps future might be nearing an end. This all changed when he received word regarding his taking command of a fighter squadron.

Lt. Col Bortnem joined MAG-11, VMFA-232 in February 2018, serving as the Commanding Officer of the squadron. This is the oldest and most decorated active Marine fighter squadron, first activated on September 1, 1925. Lt. Col Bortnem considers himself lucky to be able to serve and stand upon the shoulders of greatness and capable leaders.  The squadron role is to provide; close air support, air interdiction and aerial reconnaissance. It is part of Marine Aircraft Group 11 and 3rd Marine Aircraft Wing.

The pride of our speaker to be associated with the oldest fighter squadron in the Marine Corps cannot be overstated. With a ninety plus year history both in peacetime and war, the unit demonstrated a commitment to excellence and service. This was further reinforced when VMFA 232 recently returned from its year of UDP deployment in Iwakuni, Japan. Beginning Friday, September 13th, the F/A-18 unit began a nearly 6,600 mile flight with stops in Wake Island and Hawaii before returning to Miramar. Air-to-air refueling was required 20 different times during the crossing, challenging the capability of each single seat pilot flying a 37 year old aircraft to complete the refueling without incident. The capability of the pilot and aircraft maintenance and support staff was critical in having the 11 plane flight return successfully. To ensure that all 17 pilots in the unit have the experience of making such a trip, a rotation was created so each pilot had an opportunity to fly a leg, some more than once. It is a testament to the skill and capability of each member of the unit and to the leadership exhibited by our speaker in maintaining the quality of the unit and the positive reputation earned till this moment.

Lt. Col Bortnem has flown over 2000 hours in the F/A-18, more than 500 of which have been in combat.  His personal awards include the Meritorious Service Medal (with 2 Gold Stars), the Air Medal (with numeral 6), the Navy Achievement Medal (with 4 Gold Stars), the Good Conduct Medal, and various unit and service awards.