While serving as Commander of the nine ship Service Squadron Four in Norfolk, VA I experienced a series of “rides” that I still vividly recall today.  It all started when we received a naval message that one of our squadron ships, a “jumboised” fleet oiler, had experienced a man overboard while operating in a large-scale fleet exercise in the Caribbean.  Over the next hour it was clarified that the sailor had jumped overboard and been recovered by the cruiser in a replenishment “waiting station” astern of the oiler.  Then more messages: (1) a second sailor had jumped overboard, and was subsequently rescued by the cruiser [still waiting to come alongside for fuel]; (2) the first sailor informed the cruiser that he jumped to protest the deplorable conditions aboard the oiler (i.e., bad food, no air-conditioning, oppressive leaders, racial discrimination, etc., etc.); and (3) a rumor started going around that a crewman was going to jump each hour until things got better.  That’s when my yeoman came in

and said “The Admiral’s on the Phone”, and I heard “Commodore, you need to get down on your ship right now!!  I have arranged with [the aviation]Admiral for a plane to Naval Air Station Jacksonville leaving in an hour – be on it, and also take your Yeoman, as you are appointed to conduct a JAG (Judge Advocate General) Investigation on all this.”  And so we flew in a very comfortable VIP airplane to JAX, where the aircraft carrier USS JOHN F. KENNEDY’s COD (Carrier On-board Delivery) TF-1 “Trader” was held awaiting us.  We, and a full load of sailors and cargo, went out and made an arrested landing on the ship, which was part of the previously mentioned fleet exercise.

Ride 1:  We stayed overnight on the carrier, then boarded a CH-46 “Sea Knight” helo that would take us to the oiler.  However, she was too far away, so we were to be put down on a cruiser, who during the next several hours, would be closing the oiler and would eventually use their helo to get us to the oiler.  The cruiser’s flight deck was too small for the Ch-46, so nearing the cruiser the helo crewman motioned me forward toward the hatch/door, put the horse-collar over my head, had me sit on the deck at the open hatch, and positioned the hoist cable.  The helo entered a hover over the flight deck and the crewman tensioned the hoist and pushed me out the door.  As I was being lowered the helo started rolling right and descending – i.e., crashing!  My totally reflexive action was to raise my arms, thus shucking the horse-collar, and jumping/falling several feet to the deck.   I ran forward from the flight deck and didn’t stop until I had reached the cruisers bridge, where an astonished Admiral and Captain exclaimed “Where did you come from?”  A short time later the Flight Deck Chief apologized to me for the push he had given me as we both ran from the flight deck – my response was definitely a “thanks!”  The helo rolled right, dragged a wheel through the deck-edge safety net, ricocheted off a gun mount and large antenna, rotated 360 degrees, splashed onto the water, subsequently gained a “stabilized, rotor turning condition”, and after a couple of minutes lifted off and, trailing fuel from a split tank, went back to the carrier.  I learned later that they had experienced an engine auto-throttle problem that the junior pilot in control did not respond to properly and the senior pilot aircraft commander had been unacceptably slow to intervene.

Ride 2:  The cruiser moved their SH-2 “Seasprite” helo from the hangar, cranked it up, and in due course lifted off for the oiler with me in one of the two crew seats in back.  The oiler did not have a flight deck, so it would be another hoist operation.  Approaching a hover, the crewman moved me forward and started to add the horse-collar when there was commotion in the cockpit.  Both pilots were intensely looking at a very red warning light on the overhead console – a transmission “chips light”, indicative of metal particles in the oil and potential massive failure.  The crewman shoved me back toward the seat yelling “strap in”.  The pilots immediately followed emergency procedures to reduce load on the transmission, and headed directly for the cruiser, where they made a successful landing.  I learned several months later that post flight inspection revealed that it had been a false indication, but impending transmission failure is an emergency you take very seriously. 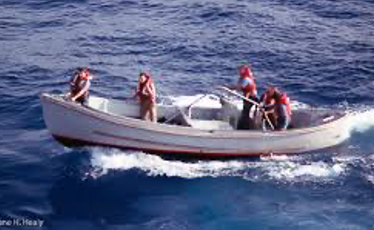 Ride 3:  By now the cruiser and the oiler had closed and it was decided to transfer me using the oilers 25-foot motor whaleboat.  The ships laid-to a hundred yards apart, the oiler put their boat in the water and it headed for the cruiser.  As they approached, we observed the boats engineman lift the engine hood, drop it down and frantically signal the coxswain to head back to the oiler.  They did, and immediately hooked up and were lifted clear.  I learned later that the engineman had discovered a ruptured engine cooling hose that was flooding the boat.  The cruiser launched their motor whale boat, which came around to the port (lee) side and in a 6-8 foot swell managed to knock the heavy metal boarding ladder up onto the deck.  It was wrestled back into place, and I boarded the wildly bobbing boat.  Since the oiler could not lift this boat – their davits were full – I was to climb up a wooden Pilots (Jacobs) ladder.  Getting from the up-down movement of the boat onto the ladder was a matter of judging the swell, grabbing the ladder as high as I could while

the boat was at the crest of the swell,  and quickly sucking my legs up so the next rise of the boat wouldn’t crush them.  The jumboised oiler had a high freeboard, and also had off loaded a lot of fuel, so it was about a 40’ climb straight up, much like scaling the wall of a four-story building.  That was quite a climb!  I was exceptionally happy when a few helping hands grabbed me as I swung my legs over the railing of the oiler!

The events, investigation, and aftermath:

Bob has 31 years naval service (1953-1984) in a wide variety of aviation, seagoing, and staff assignments during the Cold War and Vietnam. Has flown over and/or sailed upon most of the world’s oceans, and visited 26 different countries.