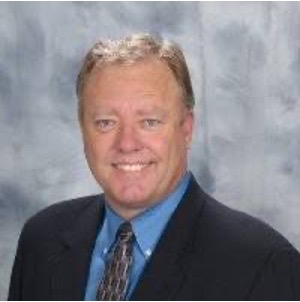 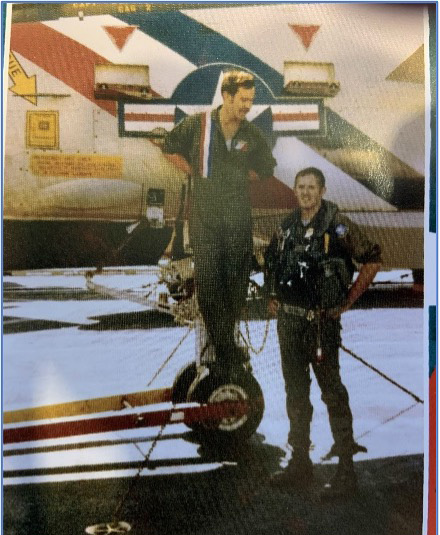 Grampaw Pettibone Squadron for its January 2020 zoom presentation wants to thank Cindy Macha, Operations Officer for providing the video of Captain Mike Rabens, USN (ret) from the Western Museum of Flight.   Mike spoke about the features and performance of the F-14.  Additional thanks are extended to Captain Tom Uhl, USN (ret) who was gracious enough to join the group and answer questions regarding the   F-14 design and performance.  Mike Rabens is a Top Gun Graduate, decorated Navy fighter pilot and highly accomplished engineer.  He currently works as a Director of Systems Integration and Test & Evaluation for Northrop Grumman.

Beginning his presentation, Mike described his military career between 1979-2004.  Retiring as a Navy Captain, Mike flew the F-14 from 1981-2004.   His experience included two deployments with a F-14 squadron on the USS Enterprise in the Indian Ocean.  Completing his second cruise, Mike was selected to attend the US Naval Test Pilot School at Patuxent River, Maryland.   Next, he was assigned to the Pacific Missile Test Center and for 2 ½ years flew the F-14 to test all manner of weapons systems (i.e., Phoenix, Sparrow, Sidewinder, AARAM, etc.).

Upon completion of this assignment, Mike returned to sea duty with VFA-213 and served 2 ½ deployments including the post Desert Storm ceasefire.  He then returned to Patuxent River as a test pilot instructor and head of the Carrier Suitability program.  During that time, he was selected and assumed the duties as XO and then Commanding Officer of the Naval Test Pilot School.  He then moved to the Joint Strike Fighter program as a Deputy Program Manager before joining the Naval Test Wing Pacific as Commander.  While in this last assignment, Mike flew the F-14 A, B and D as well as the F-18.  He retired from the Navy in the summer of 2004 as a Captain. 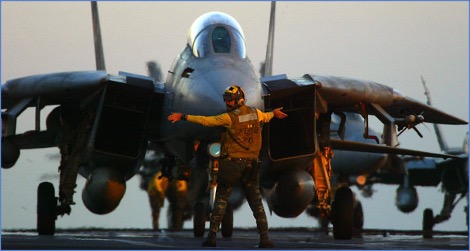 n his presentation, Mike offered a description of the twin-engine F-14 beginning at the nose, which he described as very large for a fighter.  This was due to the 36-inch diameter radar mounted in the nose, which was designed in the late 60s.  The initial AN/AWG-9 radar with a 100+ mile range equipped the    F-14 as a fleet interceptor.   The aircraft, with a 500+ mile range, was to protect the fleet, identify and intercept long-range enemy bombers.  With the aid of the radar, it prevented the bombers from launching their cruise missiles against U.S forces or its allies.

The F-14 could track up to 24 targets simultaneously with its advanced radar weapons control system. Additionally, it could attack six targets utilizing the Phoenix AIM-54A missile well-beyond 50 miles, while continuing to scan the airspace.   The aircraft carried the Phoenix missile, the medium-range Sparrow, shorter range heat-seeking Sidewinder missile and the 20mm Vulcan gatling gun.  Mike pointed out that unlike the F-4, the F-14 was equipped to engage short range as well as long range targets, due to its weapons system features. 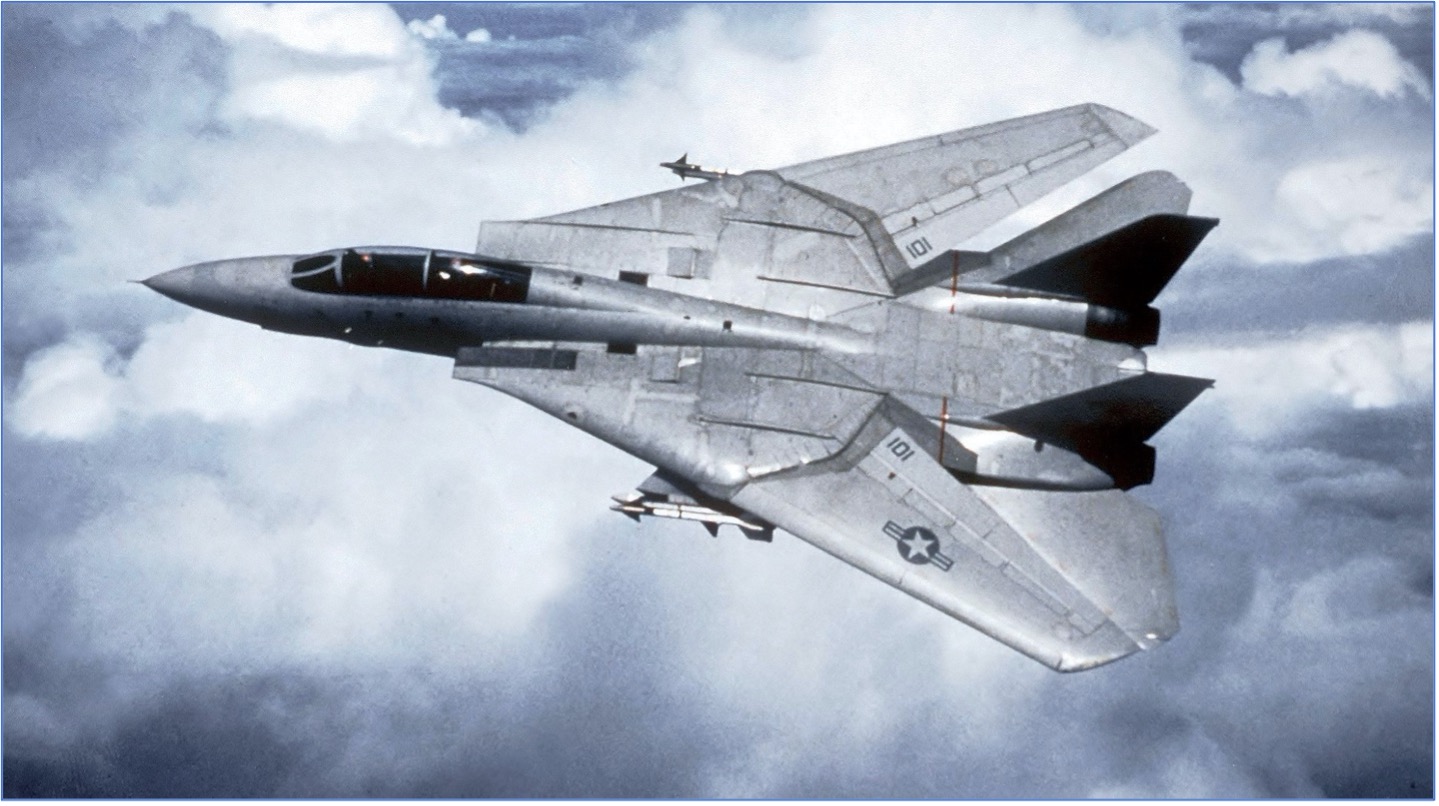 For its fighter role, the F-14 is a very large plane.  The size is further increased due to its unique feature of having a swing-wing design which exists on only one other aircraft, the F-111.  This feature enables the plane to accelerate to Mach 2.4 during missions.  By adjusting the wing sweep to 20 degrees, the plane could slow to 125 knots for landing a board carriers.

The shorter height of the twin-tail enabled the plane to maintain control in flight and be able to fit in the hangar bay on-board ship.  The size of the aircraft provided a large spacious cockpit with an unobstructed outside view both above and below for both the pilot and radar intercept officer sitting behind the pilot.  When viewing the aircraft 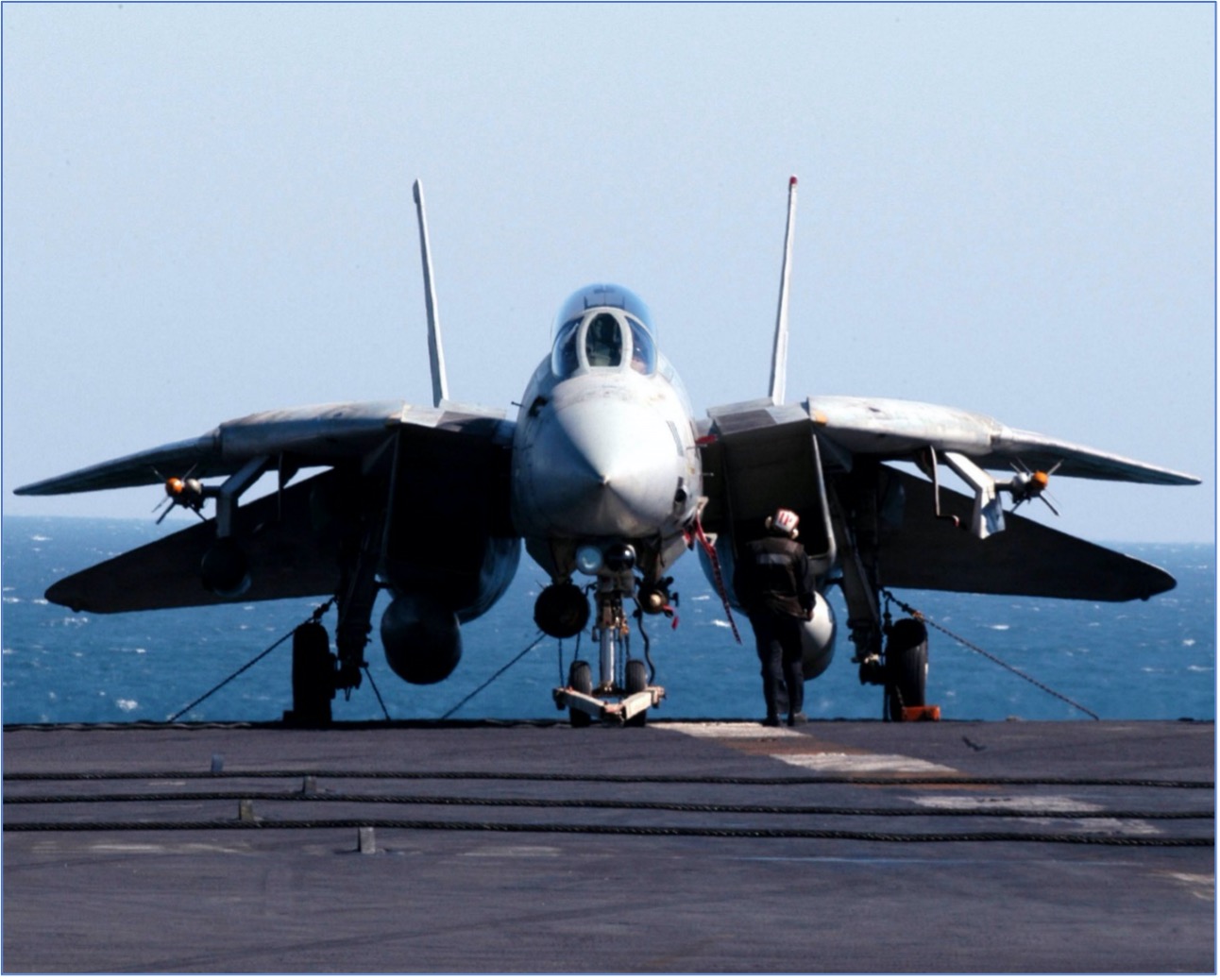 from below, the tunnel created by the two engine nacelles, could house four Phoenix missiles or four Sparrow missiles.  The efficient aerodynamic shape of the aircraft provided 40-60% of the lift even when armed with missiles.  The first engine for the aircraft was the TF-30, which was designed to be both fuel efficient and capable of pushing the aircraft to Mach 2.4.  However, the engine was not the best choice for the F-14. It had a tendency to stall when the aircraft was in a high angle of attack and side-slip.  This occurred during dog- fighting maneuvering

Mike noted that according to the FAA, the distance separating the two engine nacelles are fairly far apart and make the aircraft a non-center line thrust plane.  Should one engine stall in a dog-fight, the significant thrust in the working engine of some 20,000 pounds, led the plane to yaw and some aircraft to enter a flat spin.   With over 2700 hours in the plane, Mike was able to manage throttle control and avoid issues with the engine performance.   The limitations 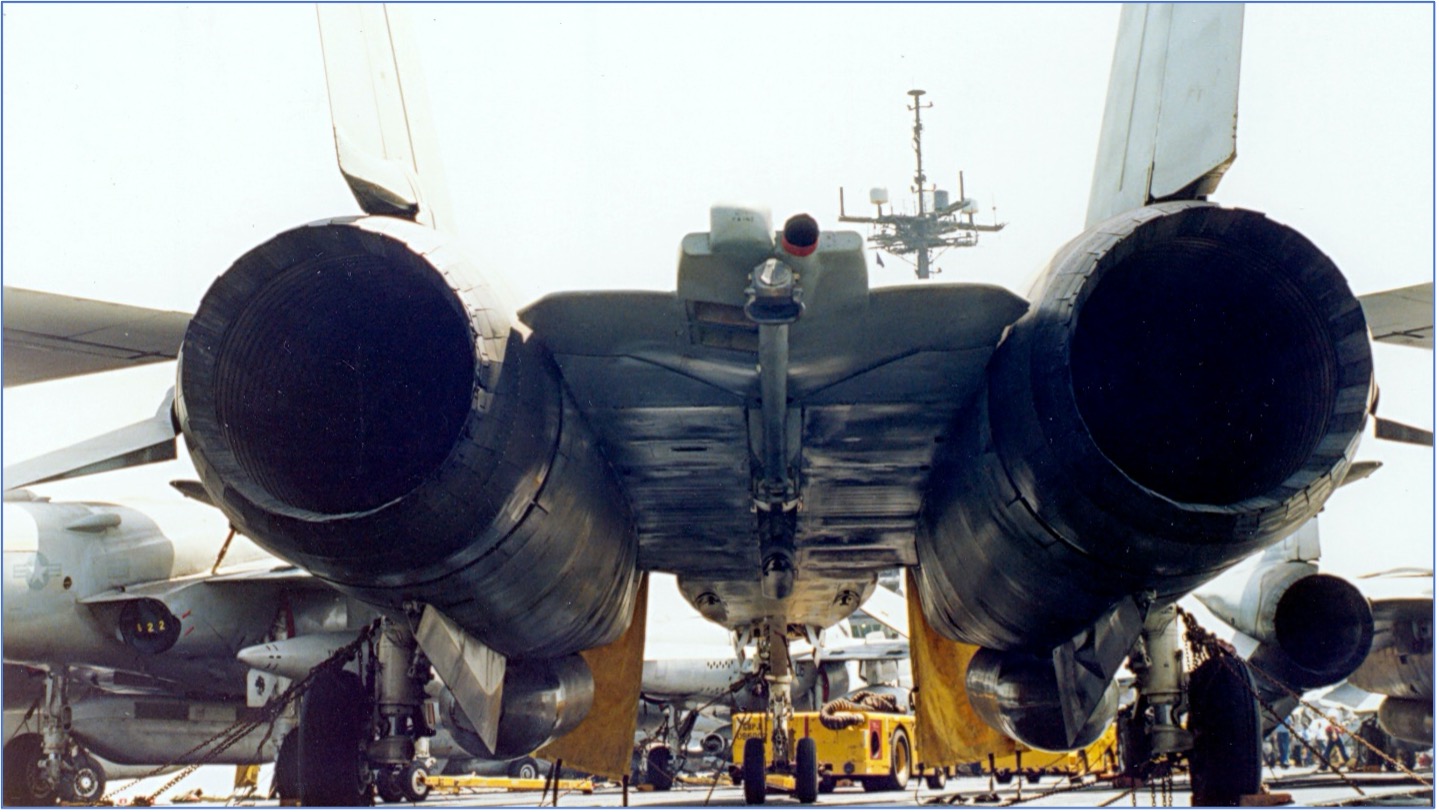 of the engine motivated a need for a replacement. The new engine from GE proved to be a more reliable, higher-thrust engine and virtually stall free.  The upgrade to this engine enabled the plane when unarmed to go supersonic in military power.  The engine change and other features relabeled the plane as the F-14B and the addition of a new radar system (AN/APG-71) and improved avionics further changed the aircraft to an F-14D.  The plane flew amazingly well when supersonic and was very stable.  It was “truly a joy to dog-fight”, Mike said. 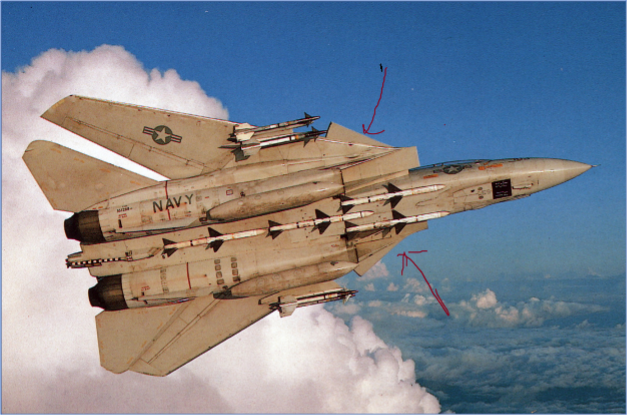 One feature of both the A and B model was the pilot actuated “glove vanes” that were needed when the wings were in full aft position of 68 degrees.  These were small triangular wings just forward of the fuselage where the leading edge of the wing is attached.  The wings needed the addition of this feature to move the center of lift forward enough in supersonic flight to enable the plane to pull the full-G load in a turn   While on-board missiles allowed for long-distance enemy engagement, the presence of the gun also enabled the pilot to engage inside visual range.

As Mike continued his talk, he next focused on the engine inlets.  As a supersonic aircraft, the design required that air entering the engine be reduced to subsonic before flowing through the turbofans.  A complicated set of three ramps just forward of the turbofans would deploy down to control the position of the shockwave and reduce the speed of the air to subsonic.   Another obvious feature of the aircraft was the robust landing gear system, to enable the plane to sustain the impact of carrier operations.  The take-off weight could be up to 73,000 pounds with a landing weight as much as 64,000 pounds.  Landing operations would see the F-14 approaching a carrier deck at a 600 ft/sec descent rate which could easily double during operations where a pitching deck occurred. 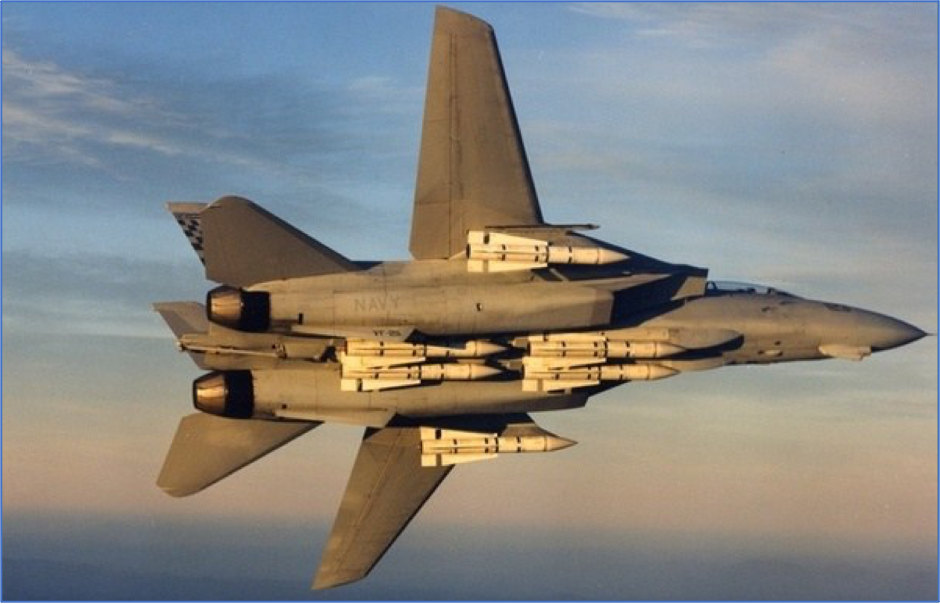 The weapons configuration could vary, depending on the target and mission.  Mike described the location for missiles could include the wing stations on the aircraft, located where the wing joins the fuselage.  A common configuration consisted of two Phoenix missiles under the aircraft with two Sidewinders on one wing station under one wing and two Sparrows on a second wing station under the opposite wing.  This was further augmented with the addition of the LANTIRN system, an infrared navigation and targeting pod for night operations.  This would be mounted on one wing station as required, which gave the aircraft a significant capability both for day and for night operations.

Mike described the stabilators of the F-14 to be almost as large as the wing of an A-4 Skyhawk, which would provide a reference to the size of the F-14.  At the rear of the aircraft, you can observe the massive size of the vertical tail and then see the tail hook, which is needed to arrest the aircraft when landing on a carrier deck.  A take-off roll from a carrier is about 300 feet with a landing of about 375 feet.

According to Mike, the stick motion was very well harmonized and the plane was a joy to fly.  Eventually, a Digital Flight Control System was added, which was not fly by wire.  As installed, it enhanced low speed movement by using wing flaps and spoilers which would engage to control lift on a carrier approach.  At high speeds, the spoiler was no longer a part of the control, which then relied on the rudders and differential tail movement.  Mike noted the plane was a joy to fly during daytime, though not so much at night.  However, the new system made it a little better in handling at night

Following the presentation by Mike Rabens, Captain USN Retired Tom Uhl, was available to answer questions regarding the F-14.  Tom began his military career with a Navy Scholarship from the University of North Carolina, Chapel Hill.  He graduated in May 1975.  He was in flight school five days after graduation joining VT-25.   He was winged in 13 months.  With his wings pinned on in June 1976, Tom was assigned to VT-24, training command as an instructor, where he served for two years.  After completing his assignment, he was initially scheduled to transition to the EA-6 and was sent to Corry Station for Electronic Warfare (EW) school.  During refresher training at Miramar, Tom was offered an opportunity to fly the F-14.   Staying in San Diego, he spent one year in training and then deployed with one of the first     F-14 squadrons, VF-2.  He spent a nine-month deployment in the Indian Ocean.  Upon returning to the US, Tom transferred to the Naval Reserves and joined a training command as an A-4 pilot.  His flight experience included 1000 hours in the F-14 and 2000 hours in the A-4.  He completed 350 carrier landings with 100 night-landings.  Most of his carrier work was on the USS Ranger.

The following were the questions and accompanying answers which Tom provided.

Why was the TF-30 engine not replaced earlier due to its performance issues?

The engine was underpowered and the initial thought regarding replacement was instead handled by adding a shroud around each engine to protect the other engine, should it suffer a failure in flight and throw a blade.  This increased the weight of the already heaviest aircraft in the fleet, but did not fix the issue of the engine till it was replaced much later.

How did the F-14 handle when subsonic v supersonic?

There was a noticeable difference regarding flight controls.  However, the aircraft was in after-burner most of the time and when in manual mode, throttles were pretty hard to move.  There were five stages of after-burner and typically with the TF-30, the pilot would leave it in stage five after throttle up.  When he came out of after-burner, the aircraft felt like it hit a brick wall.

The role of the F-14 was fleet protection.  Aircraft would fly out to a 250-mile combat air patrol distance from the fleet and with their 100+ mile missile range create a shield around the carrier.  This was far greater than the capability previously demonstrated by the F-4.  With a 6 to 1 capability with the Phoenix missile, the F-14 could protect the fleet and exceed the previously expected performance that Russian bombers had encountered when harassing the US fleet at the 100-mile range and the 1 to 1 missile capability of earlier aircraft.    When in need of fuel, the extended patrol would return to the 125-mile range, take on fuel and return to the outside ring.  At the same time, aircraft patrolling at 125-miles would fly out to 250 miles until the refueled aircraft returned.  The early missile management, using the Phoenix missile, was upgraded with a faster and more capable system with the introduction of the AAMRAM.

Compare how the F-4 and F-14 dealt with the rate of turn and performance.

The last generation F-4 included control surface features that enabled a higher rate of turn then previously noted, but it was still less than the F-14.  Additional fuel efficiency and engine performance of the F-4 was less than the F-14.  The amount of smoke generated by the F-4 was quite common and demonstrated engine inefficiency.  With the TF-30 engine operation the F-14 could cruise at 150 mph during a combat patrol and at the required range be twice as effective as the F-4.