At their August 13, 2021 meeting, Grampaw Pettibone Squadron and Two Block Fox Squadron hosted  a Zoom presentation featuring Lynn Jenson.  Lynn is a Northrop Grumman Project Manager/Senior Engineering Specialist and former curator for the Western Museum of Flight at Torrance Airport. In his presentation Lynn discussed the history and evolution of aircraft that culminated with the development and introduction of the McDonnell F-4 Phantom aircraft.  He focused on a number of factors related to the original creation of the McDonnell F-4 Phantom II: the F-4 predecessors, its family line and design evolution.   He listed little-known F-4 concepts, some operational history highlights and a few trivia issues.

The “Gold Standard” of jet fighters is the F-86 Sabre.  As a fighter, the F-4 is a large plane.  While the F-86 is 37 feet long, the Phantom is 63 feet long.   Between 1958-1981, a total of 5195 aircraft were  manufactured.   When first introduced, the Phantom was the first naval fighter not equipped with a cannon as part of its weapons system.  It was the first naval fighter interceptor to not have to rely on ground control when directed to targets.  It was originally designed solely as a carrier-based fighter.  It was the only aircraft to be flown by both service air demonstration teams, the US Air Force Thunderbirds and US Navy Blue Angels.

The creation of the Phantom line was the brain child of James S. McDonnell.   Following completion of his engineering education at MIT, Mr. McDonnell began his career in aviation in 1928.  After building his experience working for other aviation business concerns, he created a new company, the McDonnell Aircraft Corporation in 1939.   One of the first aircraft from the McDonnell Aircraft Corporation was a plane called the XP-67, “Bat” Model 1, designed as an interceptor to compete in a 1940 contract bid.  It was an innovative single-engine aircraft with a twin pusher prop design.  Although the design was creative, it failed to be selected, and subsequent changes in the engine choice failed to move the design forward in the competition.  In 1944, during a flight test, the aircraft experienced an engine fire and the test aircraft was destroyed.

The next aircraft to begin the ‘Phantom’ legacy was the FD-1.  Developed in 1945, it was later relabeled the FH-1.  Initial design provided good visibility, a tricycle landing gear to minimize jet blast effects and an angled engine to protect the aircraft skin.  The plane was capable of carrying four .50 caliber machine guns and eight .5-inch aerial rockets.  However, it could not carry bombs, had poor navigational avionics and was not equipped with a pilot ejection system.  With only 62 built it was used in the US Naval Reserve and as a trainer. 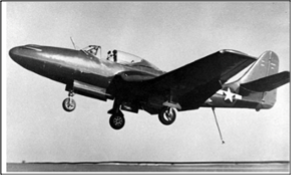 During production of the FH-1, McDonnell Aircraft introduced the F2H Banshee.   The F2H was to be an improved version of the FH-1, but with increased weight, armament and engine features, it became a totally new aircraft, powered by a Westinghouse J34, with proven capability.  The plane, produced between 1947-62, had improvements over the FH-1 that included: pressurized cockpit, electrically operated flaps, gear, folding wings, canopy and air brakes.  It was equipped with four 20 mm cannon, bombs, rockets and nuclear capable.  Produced in multiple configurations, it was one of the primary American jets in Korea.  A swept wing version of the Banshee was considered, but never moved beyond concept stage.
Beginning in 1946, a design for a long-range twin-jet engine swept-wing fighter was submitted by the company and was called the XF-88 Voodoo.  It never entered production but did lead to the creation of the F-101 Voodoo.   The Voodoo’s career as a fighter-bomber was relatively brief, but the reconnaissance versions served for some time.  The F-101 first flew in 1954 and was operational until 1979.   While the Voodoo was a moderate success, it may have been more important as an evolutionary step towards its replacement in most roles, the F-4 Phantom II.

In 1949, McDonnell Aircraft began a design of its only single engine fighter the F3H Demon.  The plane was a subsonic swept-wing, carrier based jet-fighter.  It was to be initially powered by the Westinghouse J40 engine, but was redesigned to accept the Allison J71 after the failure of the J40.  It first flew in 1951, was operational in 1956 and retired in 1964.  Later versions of the aircraft were only armed with the AIM-7 and AIM-9 missiles.

The speaker focused on the Phantom evolution when describing the changes that occurred in aircraft design from 1952-55.   Beginning in 1952, studies indicated a Navy need for an “attack fighter”.  By 1953, a requirement for a second engine occurred, and by 1954, the aircraft was modified to become an  all-weather fighter bomber with the addition of 11 external hard-points for weapons.  In 1955, the Navy changed the requirements and wanted an all-weather Fleet Defense Fighter with the addition of a second crew member to operate the radar.  By July 1955, the Navy ordered two XF4H-1 test aircraft and five pre-production aircraft.

The design features over the course in creating the Phantom were as follows:

Four additional designs were considered which included both the Wright J65 and GE J79 engine.  Models designed were both straight-wing and delta.  The design team settled on the 98B version and began comparing both the J65 and J79 in mockup.  Designs included a Modular Nose with 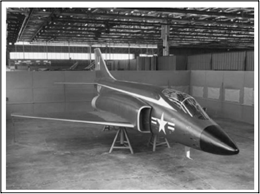 It was clear that the mock-up began to take on the image of what later became the F4 Phantom.  The initial designation of the soon to be iconic aircraft was F4H-1 Phantom II.  The features of the aircraft still retained a straight wing and tail-surface, but wind-tunnel tests revealed lateral instability with this design.   To correct the problem, the outer edge of the wings was raised by 12 degrees, which averaged out to 5-degrees over the entire wingspan.  Additionally, the tailplane was adjusted with a 23-degree anhedral, which improved control for high angle of attack and kept the tailplane clear of engine exhaust.

The McDonnell F4H-1 Phantom II was first introduced with an early configuration that came with a flat canopy, small nose, no ejection seat for the rear cockpit, no inboard flap and only one pitot tube on tail.  Subsequent changes improved the design and construction to the final version known today.  According to Lynn, the F4H-1 Phantom II first flew in 1958 and entered service in 1961.  By 1962 the aircraft was just called the F-4 and during its production life was delivered in 12 different versions for the US Navy, US Marines and US Air Force.  Export versions were acquired by 11 nations.  The aircraft was used by U.S. military flight demonstration teams, the US Navy Blue Angels and the US Air Force Thunderbirds, from 1969 to 1974.

Lynn noted that the F-4 established over 14 speed and altitude records from 1959-1962.  It was capable of carrying a larger payload then the U.S. Boeing B-29 or British Avro Lancaster.  During the Vietnam War, the F-4 was credited with shooting down 147 enemy aircraft. 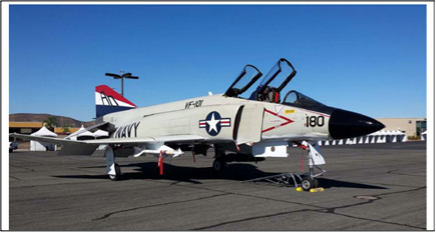 The robust design of the Phantom was demonstrated on a number of occasions when launched aircraft failed to unfold the wings before flight and still return safely and land.  In 1967, during a mission over North Vietnam, two F-4s sustained battle damage and were losing fuel at an excessive rate.  One aircraft loss was so great that a bail out over North Vietnam was considered.  The pilot of the second plane suggested methods to assist the first aircraft and using the tail-hook of the lead plane was able to place the end of the tailhook against the windshield of the second plane and push the lead plane out of North Vietnam until both crews were able to bail out and be rescued.

The F-4 is considered one of the most versatile fighters ever built.  Its longevity, sustained performance and overall capability have been amply demonstrated time and again.  It is a noteworthy achievement of the former McDonnell Aircraft Corporation to see the aircraft succeed as it did.