The reported demise of the Grampaw Pettibone Squadron may have been premature.  In spite of the decline in attendance, the squadron continues to move forward, although smaller in size.  It continues to be a source of historical sharing of military related events, equipment, personnel and information for all in attendance.

The picture to the left shows Tom receiving a challenge coin from the squadron PAO, David L. Malmad.

Tom joined the Army in 1967 and graduated from flight school as a Warrant Officer helicopter pilot soon thereafter.  He served 15 months in RVN.  In 1971 Tom joined the California Army National Guard.  He joined the California State Guard (the unpaid part of the CA Military Department) in 2010 and is serving presently as a CW5.   While in Vietnam, Tom flew the UH-1 Huey and the OH-6 LOH in air cavalry, assault helicopter, attack helicopter, and brigade aviation units.  His logbook shows over 7500 flight hours, with 1300 combat hours while in RVN. He also flew two tours in the Middle East with Army aviation.

Tom began his presentation by describing the difference between fixed wing Air Force and rotary wing Army transport of aircraft to Southeast Asia.  While Air Force transports had the flight range to move personnel and equipment, Army rotary wing aircraft were packed up and wrapped with protective covering and transported onboard Navy ships to Vietnam.  Upon arrival, helicopters would have their rotor blades reattached, flight tested and flown to their assigned bases.  Rotary wing Army aircraft remained operational in country until the end or until they were damaged or destroyed in training or on missions.

Once in country, Army personnel were assigned to bases throughout South Vietnam, either in tents, Quonset Huts or semi-permanent structures.  Open structures to reduce the effects of humidity were also constructed throughout the South.

Tom noted that the structures were built by a U.S. contractor, PA&E (Pacific Architects and Engineers).  The Army Corps of Engineers also contributed to the construction of military base facilities.  Sandbags would be added to create some protection from enemy fire.

Airfields and Heliports existed throughout the South.  While fixed wing aircraft required a runway to operate, helicopters could operate from an aircraft helipad.  Parking and protection for helicopters varied depending on the size and model.  Walls were constructed for each pad to be below the height of the main rotor blade when it was parked.  The walls were constructed from 55-gallon drums or sandbags and filled with dirt.  While wall construction provided some protection to aircraft from enemy fire, it was not total protection.  No more than two walls were normally constructed, to allow the aircraft to hover into and out of parking.

Most helicopter maintenance was conducted at the helipad and did not provide any protection from the sun, changing weather conditions or enemy fire.  Extreme heat, humidity and rain created challenging moments when maintaining rotary wing aircraft.  The crew chief who provided maintenance leadership worked double duty as an operational crew member on missions and as supervisor during maintenance and repair between missions.

The helicopter provided a foundation for innovation, flexibility and creativity.  Instead of transport by truck or shoe leather, air mobility was introduced which reduced delivery time and enabled troops to be on the scene much faster.   Helicopters provided a platform for fire support and assisted ground personnel during enemy contact.   Removal of wounded personnel from the battlefield was enhanced by the medical evacuation or Medivac function.  Transport of equipment, artillery pieces or other needed resources was carried out by heavy-lift helicopters.

From 1965-1973, the Bell aircraft UH-1 Iroquois was the most common utility helicopter in Vietnam.  Army units knew the aircraft as the “Huey”, due to its earlier designation as an HU-1.  In 1962, it was redesignated the UH-1 and often called a “Slick” for troop carrying.  As a troop carrier it included door gunners who manned M60 machine guns on each side of the aircraft.  Generally, no other weapons systems were mounted on the aircraft in this configuration.  It was also used for medical evacuation(medevac).  When for medevac, it often had the callsign “Dustoff”.  Later versions of the “Huey” came equipped with a variety of systems and weapons, which slowed the aircraft down in flight, due to the added weight.  Aircraft could carry door mounted 7.62 M60 machine guns or forward fixed mounted guns, nose mounted 40mm grenade launchers, and 2 x 7 or 2 x 19 tube rocket pods which fired 2.75 inch FFAR(folding-fin aerial rockets).   Later model aircraft were also equipped with rapid firing mini-guns and special purpose anti-tank missiles.

While the “Huey” continue to serve as an armed utility purpose aircraft, by 1967, Bell introduced a narrow shaped, purpose-built attack helicopter, known as the AH-1G “Cobra”.  The “Cobra” featured a tandem cockpit, stub wings for weapons, and a chin-mounted gun turret.  It was considerably faster than the UH-1 and could respond to ground support events as well as protect the slower rotary air assets.

Tom reviewed the training Army helicopter pilots received before they arrived in Vietnam.  Primary rotary-wing training was conducted at Fort Wolters, Texas.  The Hughes Model TH-55 was selected as a primary trainer in 1964.  It had a three-bladed fully-articulated main rotor, giving it a very fast speed for a trainer.  This meant that the pilot needed to react much faster and correctly as compared to earlier trainers such as the Bell OH-13 or Hiller OH-23.

Among the rotary-wing missions in Vietnam was aircraft used as a scout or observation helicopter.  The U.S. Army began to use Bell OH-13 Sioux and Hiller OH-23 Raven helicopters early in Vietnam.  These aircraft served as artillery spotters or to scout ahead of UH-1D Huey formations in the moments before air assaults, and to gather information about landing zones and enemy locations.  Our speaker indicated they were good helicopters but not a good choice as a scout aircraft.

Progress in aircraft development led to the introduction of the Hughes, OH-6A.  This was a small, four-bladed main rotor, making it a fast, noisy and highly maneuverable aircraft.  Tom noted that with 900 hours in the aircraft, he was well versed in its capability.  It was used in both utility role and as a “LOH”

(Light Observation Helicopter), pronounced “LOACH”.  Even when this helicopter was shot down, it refused to crack.  In the event of a crash the rotors, skids, and tail boom would be torn off, leaving the egg-shaped body intact to protect the crew.  This improved the survival chances of the crew and passengers.

Tom described the next aircraft introduced in Vietnam for observation, the Bell, OH-58.  He explained that the design of this aircraft had the engine and transmission outside of the cabin, creating a quiet, comfortable ride for ‘VIP’ use.  With only two main rotor blades, it was not as powerful, flexible or survivable as the OH-6 and was not as popular for the scouting role it was selected to fill.

The expansion of rotary aircraft in Vietnam saw an introduction in the realm of cargo transport.  One of the earliest aircraft used by the South Vietnamese for troop transport was the tandem rotor radial engine Piasecki, CH-21, also known as the ‘Flying Banana’.  The design did not lend itself for suitable weapons defense, even though it had multiple roles that included serving as a; troop, cargo or assault aircraft. 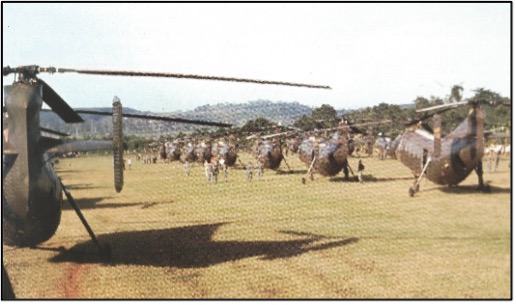 The US Army acquired one particular type of cargo helicopter that was used as an aircraft recovery vehicle, due to its size and load carrying capacity.  The Sikorsky, CH-37 A ‘Mojave’, while successful in its role, with two large piston engines had a short operational life in Vietnam.

Tom continued to share his knowledge of helicopter operations and introduced the Boeing Vertol CH-47 Chinook.  A twin, tandem rotor, gas-turbine helicopter replaced the piston driven CH-37.  This aircraft was, introduced in Vietnam in 1966 and is still in service today in later versions.  The Chinook transported troops to the battle field or extracted teams as well as carried loads of ammunition to needed areas. 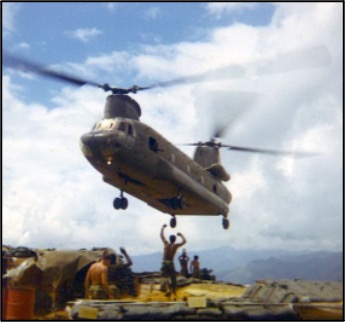 From 1965-1972, the Sikorsky CH-54 Skytrane/Tarhe served in Vietnam.  While no longer in service, as a twin-engine turbo shaft aircraft it was used for transport and downed-aircraft retrieval.  It was highly successful.  While not a particularly attractive aircraft, the Skycrane could hold its cargo in a sling-loaded configuration. 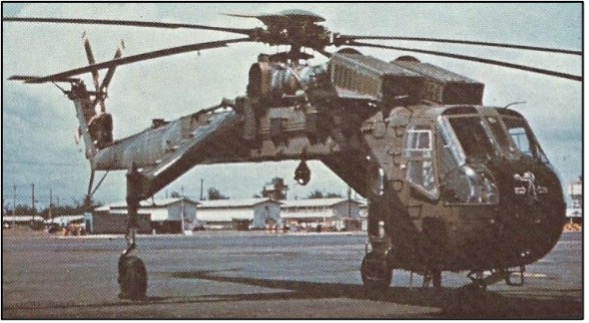 Operational records for US Army rotary-wing saw 5,195 US Army helicopters lost and 1,834 helicopter pilots killed.  While the majority of aviation operations for the US Army in Vietnam was fulfilled by rotary-wing aircraft, the Army did have a collection of fixed-wing aircraft that met operational needs throughout the country. 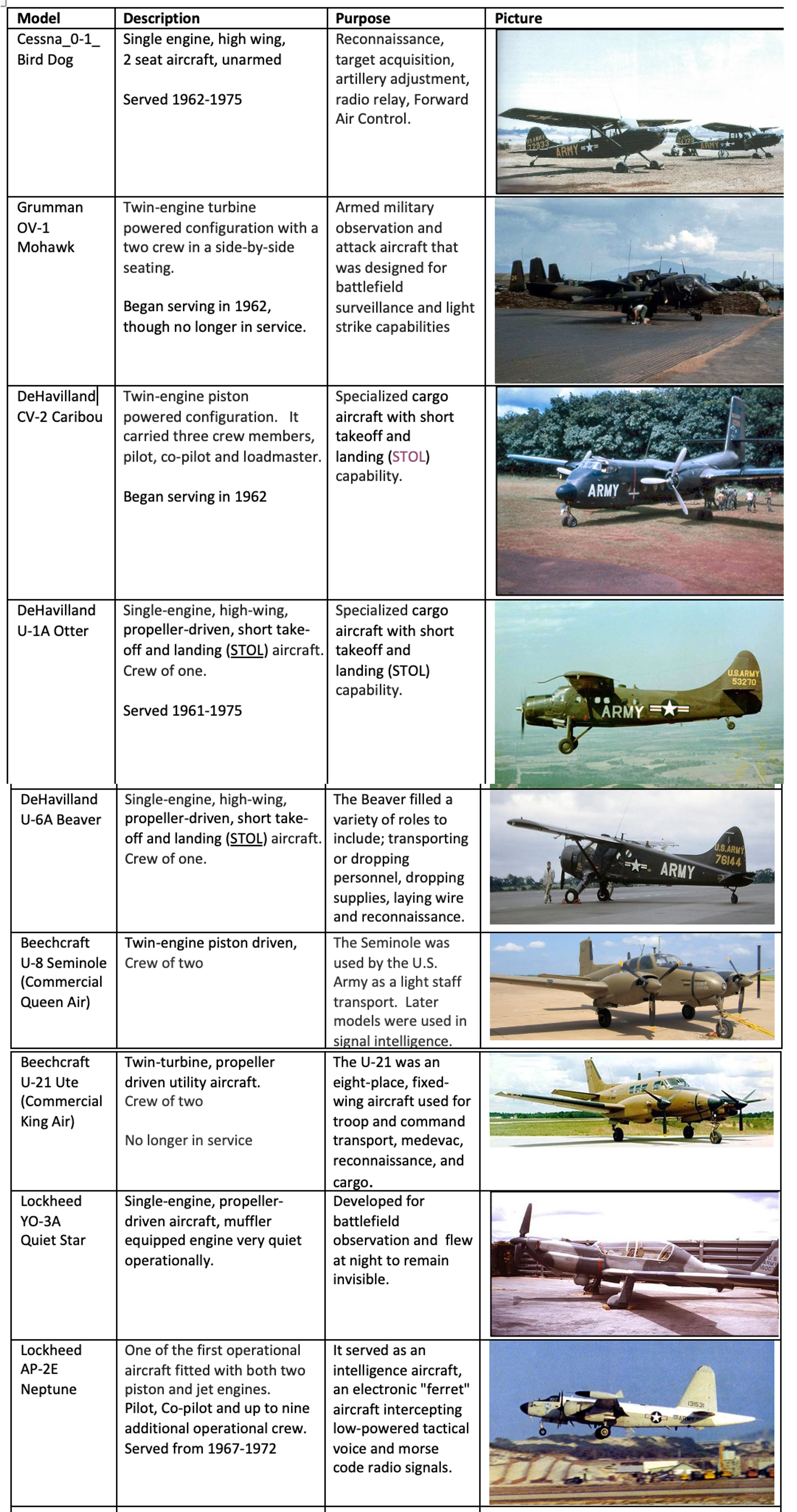