At their September 8, 2022 meeting, the ANA Grampaw Pettibone Squadron hosted James E. (“Jim”) Markel.  Jim is a former Marine Corps Vought F-8 Crusader pilot (Captain, USMC), holder of the Distinguished Flying Cross and five Air Medals for service, flying the F-8 over the Republic of Vietnam between 1965-66.  Jim talked about his time in the cockpit of the Crusader.  He joined the Marine Corps in order to meet his draft obligation, but ended up in flight school.  He said, “From PFC in a Howitzer Battery to Captain in a Fighter Squadron in five years”.  He served 10 years in the Marines, seven on active duty and three in the ready reserves.  After his service, he remained active in the aircraft industry and civil aviation.  He is an experienced aviator with over 9,000 hours logged as pilot-in-command who holds an Airline Transport Pilot Certificate with 10 Type Ratings in Transport Category jets ranging from Learjet to Boeing 747.

Jim opened his presentation by stating that pilots tell two types of stories.  The first stories are “Bull Roar” and the second are “Fairy-Tails”.

In September 1965, Jim was ordered to South Vietnam and was assigned to the Third Marine Amphibious Force (III MAF) in the then Republic of Vietnam as a Forward Air Controller.  It was not exactly what he expected as a fighter pilot, but he said it turned out to be a wonderful experience.

Jim was trained to fly the Vought F-8 Crusader.  The Vought F-8 Crusader is a single-engine, supersonic, carrier-based air superiority jet aircraft built by Vought for the United States Navy and United States Marine Corps.  The first F-8 prototype was ready for flight in February 1955 and had its maiden flight on 25 March 1955.  The F-8 served principally in the Vietnam War.

Chance Vought formed the 1000 mph club when U.S. Navy Cmdr. Robert W. “Duke” Windsor, Jr., flew a production Chance Vought Aircraft F8U-1 Crusader to 1,015.428 mph — Mach 1.54 — over a 9.3-mile straight course, on Aug. 21, 1956, establishing a new National Aeronautic Association U.S. national speed record.  On his third familiarization flight in the F-8, our speaker flew the aircraft to a confirmed top speed of 1,037 mph.  Upon landing, Jim was met by the Chance Vought field representative and was awarded a lapel pin to recognize his having joined the 1000 mph club. 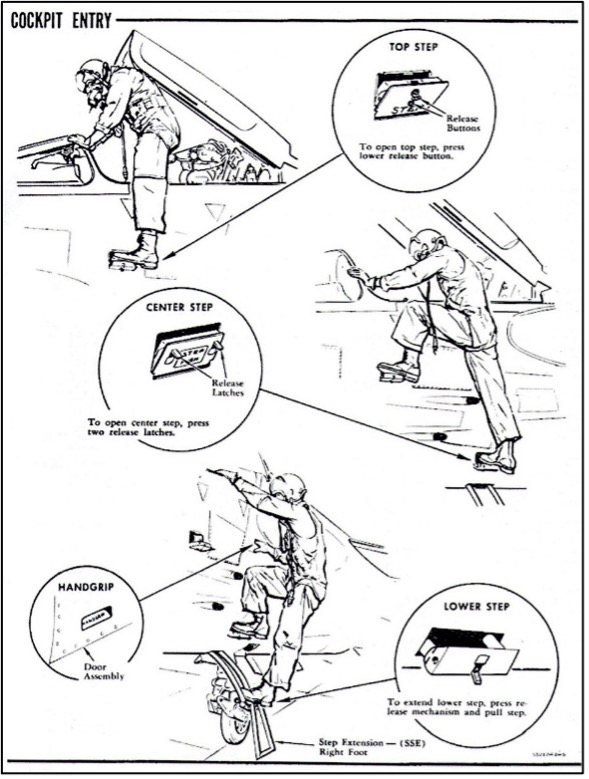 im noted that the F-8 is a challenge to climb into the cockpit.  “If you do not first start with your left foot on the lower step extension and enter the cockpit with your right foot, you will not be able to get into your seat”, he explained.

Answering a question from the audience, Jim described how the F-8 wing works.  “The F8U Crusader is unique in providing a two-position, variable incidence wing which allowed the pilot to hydraulically raise it 7 degrees to enable the aircraft to land and takeoff at slow speeds while maintaining the fuselage parallel to a carrier deck or runway for excellent visibility by the pilot.” 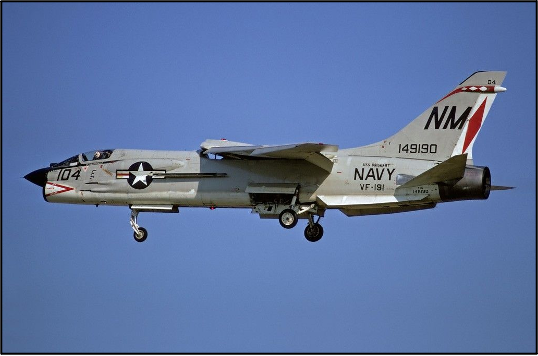 In September 1966, our speaker was sent out on a mission called a “Night Special”.  It involved attacking a target in Laos.  The target was the intersection of a number of trails that were used by the enemy to move supplies from the North to aid enemy troops in South Vietnam.  The target was located in very mountainous terrain surrounded by limestone peaks.  A C-47 aircraft would support the mission by releasing parachute flares that illuminated the target.  The Crusader would approach the target at 450 knots with a dive angle of 45 degrees and follow the flares over the target.  The pilot would try to avoid the surrounding mountains and ground-fire which also included radar controlled anti-aircraft guns.

When Jim returned from the night mission and was in the mess tent at 3:00am for breakfast, he picked up a “Stars and Stripes” newspaper with a front-page story that included a direct quote from President Johnson (LBJ), denying that US forces ever flew in Laos.

Jim described the features of the F-8 and indicated that the aircraft was easy to recognize if it was in trim during flight.  The picture below shows the nose of the aircraft and a black metal strip which protrudes above the nose.  That strip is behind a painted stripe on the top of the nose.  When the metal strip is lined up with the painted stripe, the plane is in trim. 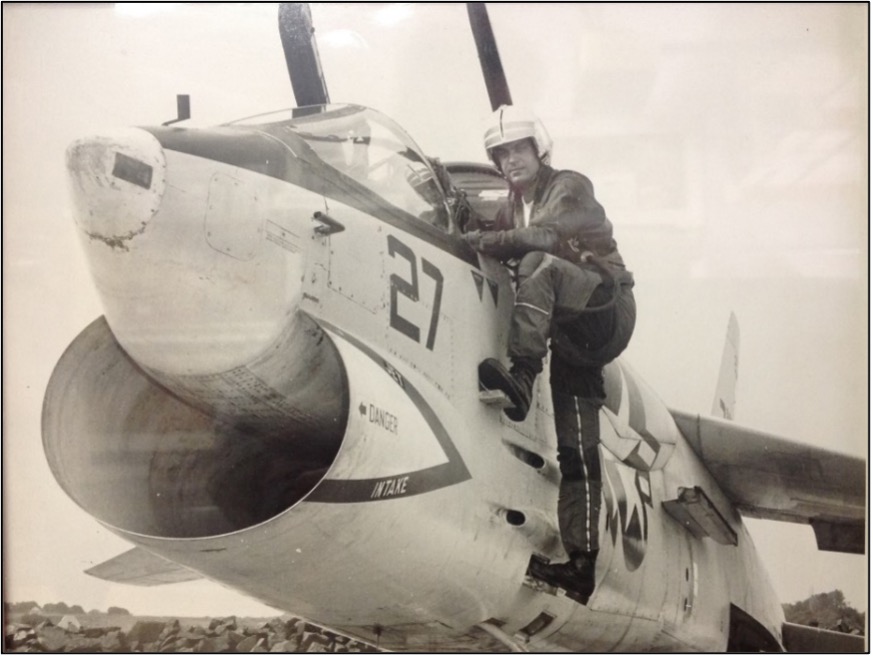 Technology and design of the aircraft features particularly weapons evolved over time.  When they put hard-points on the wings for the E model, Jim described the control stick pictured below which contains a number of features that pilots learn to use.   The trigger inside the control, is used to fire either the Sidewinder heat-seeking missiles or the 20mm cannon, depending on the master armament panel 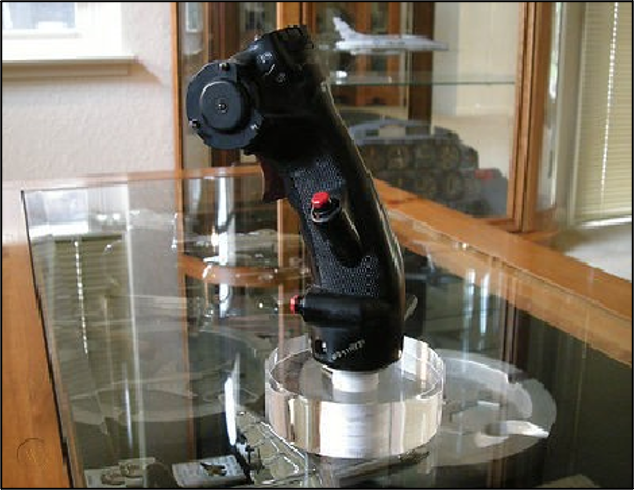 selection.   The upper red button on the right side is controlled by the pilot’s right-hand thumb.  It will release whatever is loaded under the wings, depending on the master armament selection.  The lower red button accessed by the pilot’s right-hand ring finger, would engage or disengage nose-wheel steering, when the aircraft is on the ground.  When the aircraft is in the air, it would fire the Zuni rockets.   Jim posed the question, “Now, what could go wrong?  Nothing went wrong, once you got used to the enhancements.” 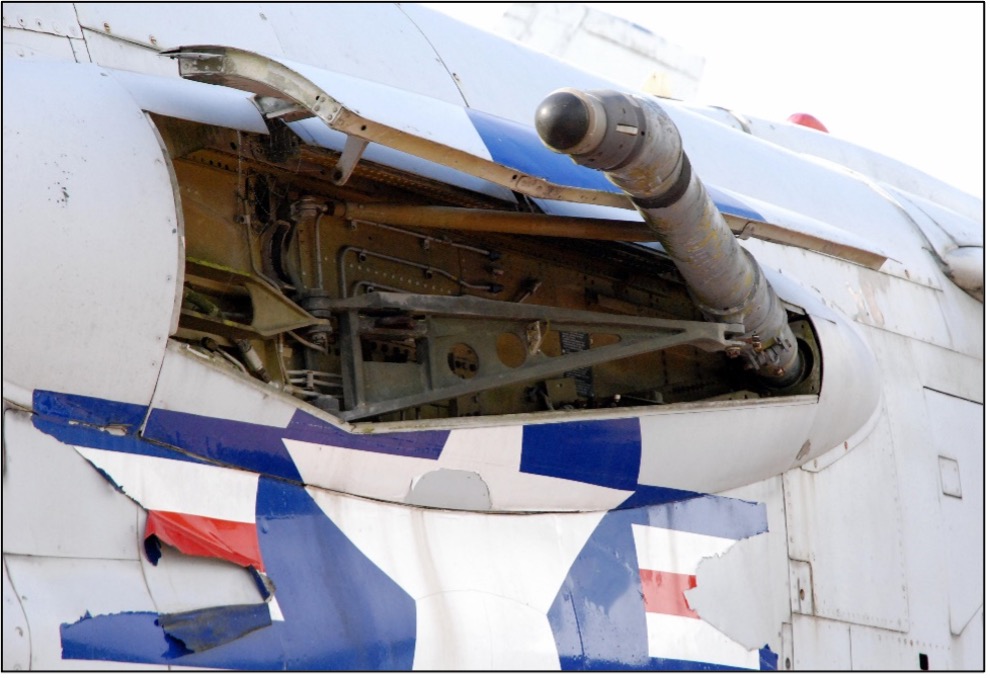 Refueling an F-8 in flight required maneuvering the plane behind the airborne refueler.  It is a little bit of a challenge according to our speaker.  The F-8 has an inflight refueling arm which is mounted in a recessed compartment on the left side of the aircraft.  It extends out from its compartment back from the cockpit and behind the pilot’s head.  The pilot cannot look towards the fuel connection because he would inadvertently move the control stick to the left.  He has to make the connection and fuel the plane by looking straight ahead.

The F-8 enjoyed the highest kill ratio of any fighter during the Vietnam air war.  Although most kills were by Sidewinder missiles, the F-8 enjoyed the option of using guns as well.  Our speaker noted that F-8 pilots had a choice, which Phantom pilots envied.

The F-8 achieved many firsts from beginning with design, progressing through development, testing and ending with production and operations.  It became the first aircraft to exceed Mach 1 during its maiden flight (March 25, 1955).  It was the first to set a world speed record in excess of 1000 mph. It won both the Thompson and Collier Trophies.  It made the first supersonic flight from the west coast to the east coast.  It became the fastest single-engine carrier-based fighter ever built.

At the conclusion of the program, Cindy Macha, ANA Operations Officer, made a presentation of the Squadron Challenge Coin to our speaker.  The photo below captured the moment of the presentation.  In the photo from left to right is; Beverly Markel, XO Vincent van den Brink, Jim Markel, and Ops O Cindy Macha 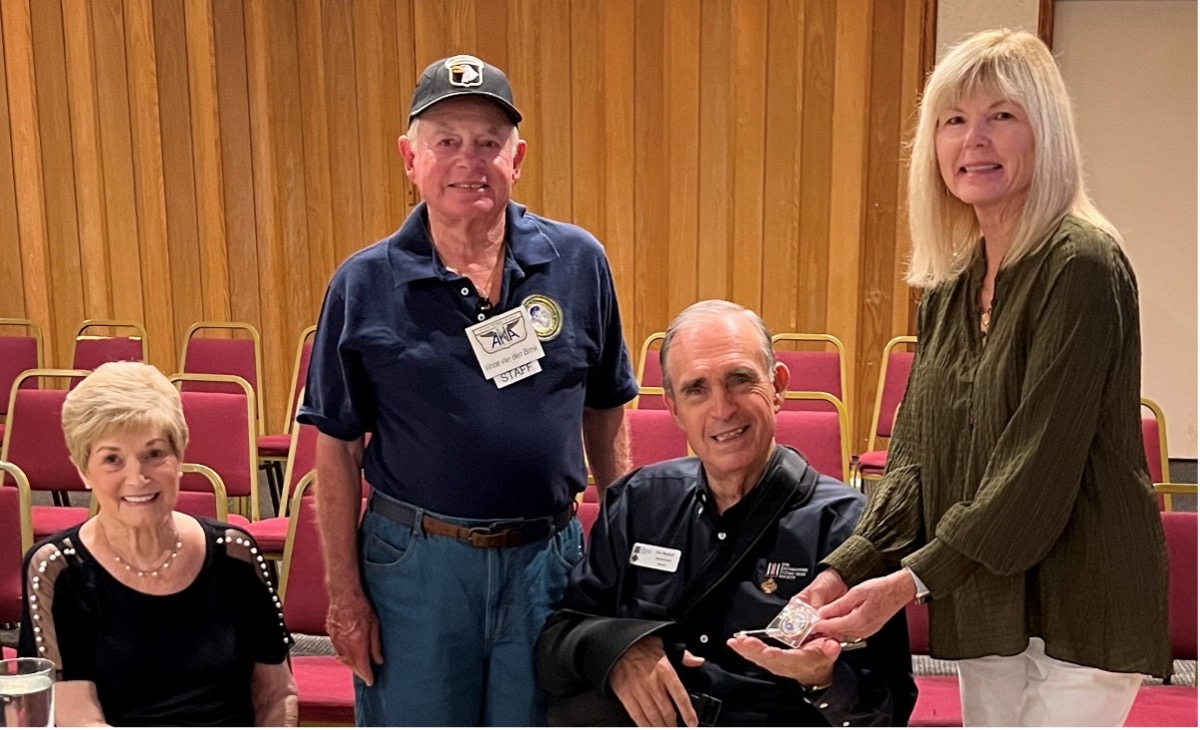 The Grampaw Pettibone Squadron would like to thank Jim Markel for sharing his experience and knowledge of the F-8 Crusader.