Gramps was enlightened and delighted by the presentation of Ltc. Steve Rainey (RET) who told us of the wonders of the F-22 Raptor jet fighter/attack aircraft. Steve started out with the reasons for the development of this incredibly sophisticated aircraft: the progress of the militaries in other countries such as Russia and China that may not always be our friends. Russia has the Sukhoi T-50 new stealth fighter and China has the Chengdu T-50 that is under development as an advanced stealth fighter.

Steve has been a military and now civilian test pilot for the F-22 and has had a huge amount of time and developmental contributions to its success. The Raptor is a product of Lockheed Martin as prime contractor with Boeing producing some parts such as the wings. One of the most gratifying aspects of this aircraft is that U.S. law prohibits the export of Raptors to any other country, presumably to protect the incredibly sophisticated design and systems from being used by any other country. Learning about the capabilities of the Raptor makes this a wise and comforting rule. 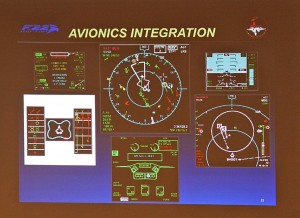 There are several  purposes for the design of the F-22. Air Dominance is critical to our ground-troops during any conflict. The last time our troops received a bomb drop was in the Korean War since our Air Force has maintained such good air dominance. Today, sophisticated ground radar and other monitoring systems can create a virtual wall against opposing aircraft flight. It is no longer possible to enter enemy airspace at a very low altitude to avoid being shot down. One reason for the Raptor is to be able to overcome and defeat the air defenses for both air-to-air combat as well as for delivery of air-to-ground armament. Furthermore, the Raptor can be used for electronic warfare and signal analysis and action. 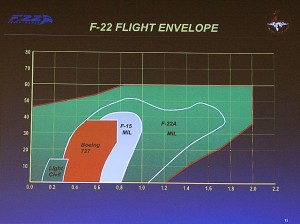 Some of the design changes that have been included are modifying an F-15 general shape to be able to fly higher and faster and get more armaments to the enemy. The external parts of the aircraft are of composite design rather than metal so that the radar image is minimized. All the external shapes are designed with radar reflection-direction as a factor. Some features such as the ultimate usable altitude have been compromised to allow the avoidance of pressure suits so the operational limit is 60,000 feet. Also, the speed has been limited to Mach 2 to avoid the need for complicated adjustable jet engine inlets. Also temperature and load limits apply as with all aircraft. Even after the limits, the Raptor will “SuperCruise” at Mach 1.7 without the afterburners in use. One advantage of this high speed performance is that it gives missiles an initial speed boost and longer range advantage from the moment of launch. This gives the missiles the advantage of effectively covering twice the airspace area that they otherwise would be able to cover.

The basic operating system is an extremely advanced multiple (three)  computer system. It can fly the aircraft at all times, provides backup for itself and handles targeting, detection and communications. Steve told us of some of his adventures with the F-22 in which the aircraft departs from controlled flight and the pilot can recover merely by releasing the controls and letting the computer system accomplish the recovery from virtually any departure. The maneuverability of the Raptor is unbelievable! Having seen it perform at airshows, I wonder if it is an airplane, helicopter or an angel. It does things no other conventional aircraft would even think of doing. This allows it to perform in an air-to-air battle and prevail against any other aircraft even without using long range air-to-air missile capability. It can achieve an angle of attack (AOA) of 60 degrees positive as well as 60 degrees negative at a gross weight of 64,000 lbs.!

Part of this maneuverability comes from the two Pratt & Whitney F-119 engines that each produce 35,000 lbs. of thrust with vectoring nozzles that can direct the thrust vector 24 degrees. Consider the vertical climb potential with 70,000 lbs. thrust versus a 64,000 lbs. weight: that leaves 6000 lbs. of vertical thrust available for accelerated  limb. This enables a vertical climb of 192 miles per hour, reaching 60,000 feet in 3.5 minutes. Before takeoff, the pilot inserts a data processing card with the specifics of what he wants it to know and do. There is a caution warning tag and no warning lights. It is so smart that it can evaluate what the enemy can see of the F-22. The avionics are integrated into a single display for directness and simplicity. The computer system controls the radio communications. 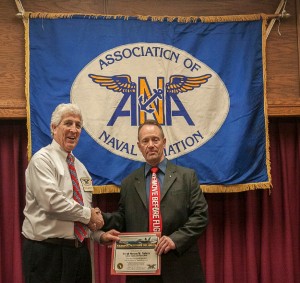 The congress limited funds to some extent but the project was successfully completed anyway. There were 195 aircraft built, of which 8 were for test use. There have been some problems that have been successfully resolved. We are grateful to Steve and the others who produced and modified this aircraft to its current state of ability. It will be critically necessary when we need to provide air support over a modern hostile nation where other aircraft cannot survive.