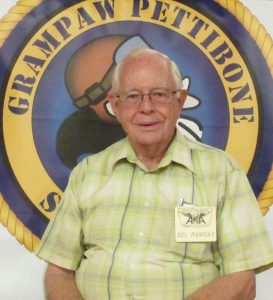 In it’s Hey-day, more than 45 years ago, Naval Air Station Los Alamitos was the largest Naval Air base in the United States, with more than 4,000 Reservists participating regularly.   From this base, the Grampaw Pettibone Squadron was formed.  And when the Association of Naval Aviation was created, the Grampaw Pettibone Squadron joined with it as a local chapter of the new association.  In the 1980’s, Gramps sponsored the National Convention in Anaheim for ANA.  This was a very active area for Naval Aviation, both for Navy and for Industry.

In the late 1960’s the national economy bent under the expenses of running the country and war in Viet Nam. Naval Air Station Los Alamitos was not successful in it’s request to Congress for $80 million to purchase land under it’s runway approach that contractors wanted to develop for housing and industry.  To avoid potential tragedy, the Navy shut down flight operations.  Squadrons were transferred to other bases, mostly in California, and NAS Los Alamitos was closed.  Gramps lost its cadre for new memberships.

Gramps stayed active in activities for members:  Monthly lunch programs with interesting speakers; awards for local active-duty sailors; field trips and visits to see ships and places of interest.   But, members who were in their 20’s-to-40’s then are in their 60’s-to-80’s, now.  Mother Nature is attacking our membership.  We used to have 120-150 attendees for lunch programs; now, we have 50, or so.   You need a good audience to attract good speakers, and we need a good membership base to maintain the operations we want.

Ask people you know or meet.  And ask them to bring a friend or two, so they have someone to talk with until they get acquainted.