Grampaw Pettibone Squadron was honored to have as its guest speaker, Doniphan (Don) B. Shelton , RADM, USN (Ret.). ADM Shelton shared a portion of his experience as a 40+ year U.S. Navy professional, both as a shipboard enlisted man and pilot.

Admiral Shelton began his talk describing his early navy career beginning when he first enlisted in August 1939 under a six-year enlistment, with expectation for US Naval Academy appointment. Boot camp was in the San Diego area and initial assignment as a Seaman was aboard the battleship USS New Mexico. Subsequent assignment to the USS California would have resulted in being present at Pearl Harbor on December 7, 1941. This did not occur due to his transfer to the US Naval Academy Prep Class in October 1940.

The admiral described his early shipboard experience as an enlisted sailor polishing teak decks with a pumice stone and salt water known as ‘holystoning’ to the culinary experience during breakfast meals of baked beans and fried eggs. After graduating from the US Naval Academy in 1944, he was assigned to the Light Cruiser the USS St Louis as a Turret Officer. During his tour, the ship participated in the Leyte Gulf campaign and was attacked by 13 enemy aircraft, four of which struck the St Louis in a Kamikaze attack resulting in considerable damage, F6F-5n Night fighter F7U-3 Cutlass GPs C.O. Tim Brown(L) thanks RADM Sheldon(R). injuries and loss of life by fellow crew members.

Coincident with the war ending, the admiral requested and was granted approval to detach from his shipboard assignment in August 1945 and report for flight training. Overcoming some delay release was granted just before the end of that month. 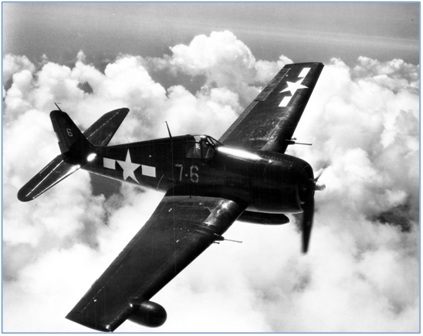 After completing flight training in June 1947, our speaker was assigned to a naval night fighter unit flying F6F-5N. This unit was the first night fighter unit to deploy after the war on a carrier and participated in the “Around The World Cruise” on the USS Tarawa.

Subsequent night fighter assignments included flying the F4U-5N in Korea. His flying skills paid off upon returning from a mission when engine failure forced a dead-stick landing aboard ship. The admiral described a second dead stick landing while flying an F3H at Patuxent River, MD which occurred when a portion of the protective heat shielding failed during a flight test causing a total engine failure. Beginning in 1951, our speaker was assigned to Navy Test Pilot School followed by assignment to the Service Test Division and then as project officer on the Cutlass F7U-3 at the end of 1953. This aircraft had a highly unusual semi-tailless design. Records show and our speaker confirmed one of the toughest problems pilots encountered during testing was the aircraft nasty stall characteristics which included a yaw, side-ways movement and post-stall gyration leading to a very dangerous ride, where some pilots chose an ejection when unable to recover. Our speaker noted that the recovery technique once the gyration began was to put the stick just a bit aft of neutral—no lateral or rudder input—hang on and the aircraft would recover nicely. 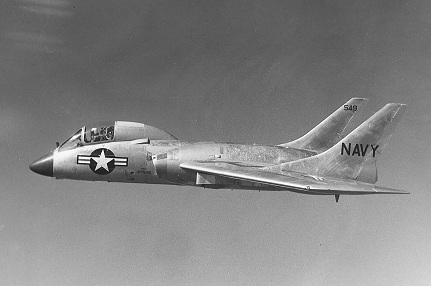 When the project officer assignment occurred, our speaker was assigned to test the F7U-3 at NAS Miramar. During that time one of his test pilot team members was Wally Schirra, later to become an astronaut. Following Miramar, the admiral transferred to Moffett Field as team leader in TTU-3 (Transitional Training Unit) where a 50 hour syllabus for four pilots and maintenance personnel was created. 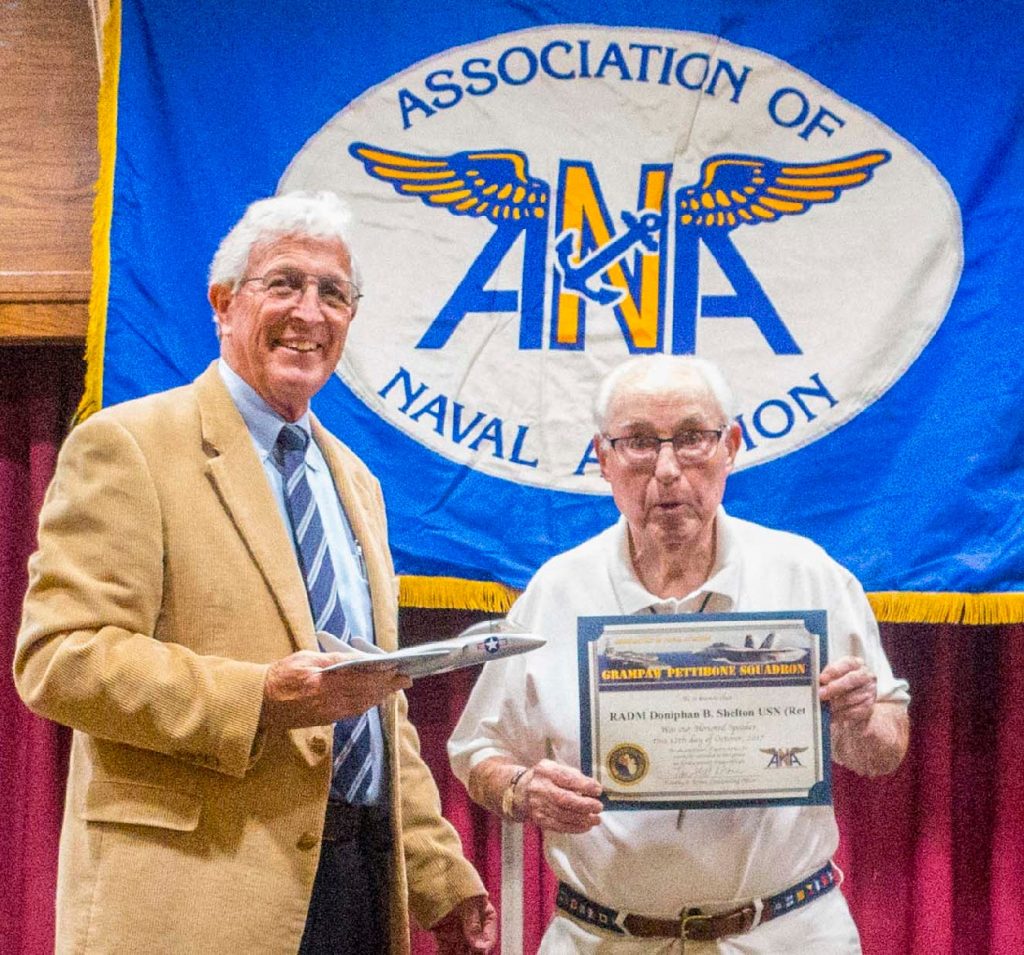 While the aircraft configuration during flight test included a rocket pod and onboard cannon, neither system was tested during flight. This decision was timely, due to the fact the firing of the cannon would have resulted in the spent shells being ingested into the engine intake, since no protective shielding was in place. In response to questions, the admiral indicated the F7U could have become an acceptable aircraft if the engines were improved which were subject to failure, the stall characteristics corrected and the nose strut design changed to reduce the danger of landing fatalities due to the strut location on hard landings penetrating the cockpit.

In conclusion, our speaker described his choice of favorite aircraft as the F4U-5N, F7F and his all time favorite the F8F-1 Bearcat.