Trending
You are at:Home»Briefing»Speaker Briefing»SPEAKER BRIEFING: The Role of Electronics in the WWII US Navy Bill Schultz, PhD
By David Malmad on June 8, 2018 Speaker Briefing 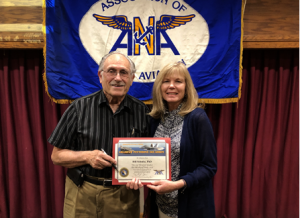 On May 10, 2018, the Grampaw Pettibone Squadron was honored to have as it’s guest speaker, Mr. Bill Schultz, PhD. Bill is a US Army and US Navy veteran. While in the Navy he acquired his knowledge and understanding of aviation electronics. Bill shared his knowledge and experience of; radar, aviation electronics, career achievements and his professional journey as a technician, university professor and research engineer.

Bill began his presentation by describing a number of events in WWII involving the use of radar.   Radar was available in Hawaii on December 7 but not correctly interpreted in time to prevent the attack.   Radar was a major contributor in supporting the war effort, though only a small trained population were capable of understanding the full operation and use at the beginning of the war.    Its full value was kept secret until after the war.

The battle of Midway had enemy battleships utilizing radar though not on their aircraft carriers.  However, US naval aircraft were able to successfully employee the equipment in locating the enemy fleet.

Leyte Gulf in late October 1944 is generally considered the largest naval battle in WWII and, by some criteria, possibly the largest naval battle in history.  Radar to track and locate enemy fleet movements as well as utilization as part of the fire control system on a number of naval vessels was amply demonstrated.  The US was able to restore as part of the force and utilize 6 battleships previously damaged at the Pearl Harbor attack.  Enemy losses included; 1 carrier, 3 light carriers, 3 battleships, 10 cruisers, 11 destroyers as well as 300 aircraft and over 12,500 men.    The outcome reduced the Japanese fleet significantly and limited their ability to pose significant challenge to allied forces for the balance of the war. 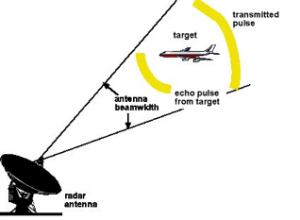 Our speaker noted that at the beginning of the war knowledge about advanced electronics technology was limited to a few hundred people and only a few were  familiar with the concept of radar.  The growth of the US military fleet and air arm demanded a corresponding increase in the capability of qualified, trained personnel in advanced electronics and radar usage and maintenance.  The training developed and carried out by the US Navy was considered a secret during the war and only disclosed in more recent years.  Even before the war began it was noted that the need for qualified personnel was critical and a training program began as early as January 1942.

The Navy program was one of the most challenging and intense programs.  A 46-week highly technical military course was developed.   This training compressed a four-year degree in electronics into a program of less than one year.  According to Bill, a standardized test was created called the Eddy Test used for a classification examination given throughout World War II, and for several years thereafter, as a means of identifying men with the capability and aptitude for being trained in the enlisted ranks as electronics maintenance personnel.   Passing the Eddy Test served as the passport to the Electronics Training Program, possibly the best technical training program then available in the armed services.   Of the estimated 500,000 who took the test, roughly 6% completed the program and were qualified as an ETP.   The test was so secure no public copy is known to exist to this day.

William C. Eddy though hearing impaired made major contributions in the field of electronics, radio communication and radar.   Based on his knowledge and skill in the field, in less than a month, Eddy’s group had developed plans for what came to be recognized as the most challenging training program of WWII.   Popularly called the Electronics Training Program (ETP),  composed of  a three-month Primary School, followed by a five- or six-month Secondary School, both involving unbelievable 15-hour study days.

According to our speaker, one of the major challenges in the classroom was failure of students to master the hand-held computer of the day, the slide rule.

Bill noted that the demand for qualified personnel required a number of training facilities be developed.   A pre-radio school was needed to qualify capable students.   The US Navy took over two junior colleges and a high school in the Chicago area to be used for the pre-radio school programs. Tests were administered weekly and a single failure was grounds for dismissal from the program.

The primary school was conducted on six different college campuses, by engineering faculty.  It was then moved to US Navy facilities at Great Lakes Training Center, and Michigan City. The secondary school covered the theory of operation and hands-on experience with the actual Navy hardware, all classified secret.

Because of the secret nature of the training and equipment, it was not considered secure enough at the Naval Academy.  The secondary school was re-located to a facility on an off-shore island, Ward Island near Corpus Christi, Texas and guarded by US Marines both along the perimeter as well as inside the facility.  The training utilized the latest equipment of the day;  Radar, Loran, IFF, Countermeasures and Norden Bomb Sight.

Upon graduation the skills and knowledge acquired was applied within carrier air groups.   Carrier air groups were independent of the ship’s company and moved from carrier to carrier and might come aboard with newer radio or radar systems that the ships technician may never have seen till that time. It was therefore critical that technicians be trained and capable of working on all manner of equipment.

Our speaker after completing training was assigned on the last Essex Class aircraft carrier, the USS Philippine Sea, CV-47.  Though the Philippine Sea was scrapped after the war, there were 24 vessels in this class and 4 (USS Hornet, CV-12; Intrepid, CV-11; Lexington CV-16 and Yorktown, CV-10) exist today as museums with one (USS Oriskany , CV-34) sunk and turned into a coral reef.

During a shakedown cruise in 1946 our speaker was assigned, the ship was recalled and equipment, provisions and supplies were brought on-board to  support a mission for Admiral Robert Byrd to explore Antarctica.  The assignment classified top secret had 6 ski-equipped R4D aircraft and 5000 personnel.   The real purpose behind the mission was never disclosed to the support members.

After the cruise, Bill was assigned to a Fleet Airborne Electronic Training Unit as an instructor.  He was responsible over a two year period to teach two-month courses to US Navy pilots on theory and operation of all electronics in use in the US Navy for land, sea and air operations.

Upon completing his service obligation, Bill continued his education and acquired his BS, MS and PhD in Electrical Engineering from the University of Wisconsin.   After receiving his doctorate, he was employed at the Cornell Aeronautical Laboratory of Cornell University, at the Buffalo, NY Airport. (1958 – 1975).   He was a research engineer and assistant department head of the Avionics Department, and was the Head of the Computer Center for six years.   He served as a full-time visiting assistant professor, in the Graduate School of Electrical Engineering, Cornell University, Ithaca, NY, for the 1960-1961 academic year.  By the early 60s, his knowledge of avionics was based on early vacuum tube technology and not viable for continued teaching in an era of integrated circuitry.   He transferred his skills to the computer information systems department becoming professor and chair of the Computer Information Systems Department at the State University of New York College in Buffalo for 22 years, 1975 – 1997.

The development of what became radar (radio, detection and ranging) began in the U.S. in 1922 when the Naval Research Laboratory in Washington, DC conducted communication experiments with new antenna designs.  The researchers noticed that a passing wooden ship in the Potomac Riverwas interfering with their signals.   The electromagnetic radiation created by radio waves could detect the presence of an object which blocked the signal.  Further discovery occurred a few years later when researchers studying the ionosphere had transmission of radio waves interrupted by a passing aircraft.  Further research led to the development and implementation of ground based as well as naval and aircraft equipped radar systems and radar detection devices.   This equipment became the basis for the training programs our speaker conducted. 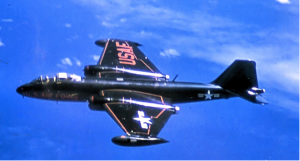 Our speaker’s military training and subsequent education saw application after the service in organizations such as the Cornell Aeronautical Labs.  Projects  while at the lab included installation of an automatic flight control system to do terrain following flight research in a Martin B-57B Canberra aircraft.   Additional research in a series of variable stability studies in a Douglas B-26 was also conducted.  This required a second pilot seat be installed containing flight instruments and controls with augmentation through an on-board computer which could simulate aircraft designs and features that were not yet operational.  The aircraft was called a Rubber Airplane.  Another specially modified aircraft, the Convair 540 turbo prop aircraft was flown with an on-board digital computer to act like the Space Shuttle or B-1 bomber.  One final project when our speaker was Director of the Computer Center was discussed which involved aeronautical engineers writing a series of equations of motion for a 1972 American Motors Javelin to demonstrate the capability in terms of weight, horsepower, speed and suspension.  By computer simulation, a set of ramps were created for take-off and landing to aid in the performance of a spiral jump.   Based on the simulation research a stunt show was created and actual performance carried out at multiple events.  The success of the performance led to the demonstration to be included in a James Bond movie, The Man with the Golden Gun in 1974.