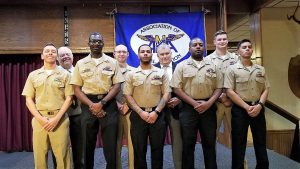 The January 10th meeting of the Grampaw Pettibone Squadron, affiliated with the Association of Naval Aviation, included in the program the recognition of several very outstanding sailors.  They were the Sailors of the Year selected by the Seal Beach Naval Weapons Station. The Base Commander, CAPTAIN Noel Dahlke, made the announcement of the selections.  They included:  the Senior Sailor of the Year–MA1 Frederick Joshua; the Junior Sailor of the Year–MA2 Jessica Mahon; and the Blue Jacket of the Year—MA3 Johnathon Lewis.

Also, at the Naval Weapons Station, from the Munitions Command Pacific CONUS West Division Seal Beach, the selections were:  Sailor of the Year—YN1(SW/AW) Joseph Williams; and the Junior Sailor of the Year—MN2(SW) Christian Quezada.

Grampaw Pettibone Squadron Certificates of Appreciation were presented to the Sailors of the Year by personnel from the Seal Beach Naval Weapons Station:  CMDCS Paul Ellis, Command Senior Chief; and MAC John Mantle.  Paul A Faulkner, Office Manager for H & R Block, Seal Beach , presented Coupons for a Tax Return to each of the Sailors of the Year.  Also, each of them received an attractive medallion from the USAA Insurance Company.

The Grampaw Pettibone Squadron meets on the second Thursday of each month at the Elks Lodge in Garden Grove .