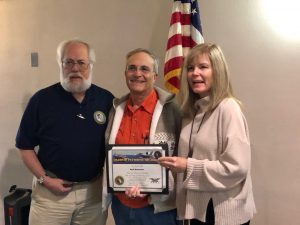 Presenting the certificate to the February Speaker, Rafi Rahamim are Cindy Macha and David Malmad

The Grampaw Pettibone Squadron was pleased to have as guest speaker, Mr. Rafael(Rafi) Rahamim. Rafi shared his experience as an electronics and radar specialist while serving in the Israeli Air Force(IAF) prior to and during the 1967 Israeli Six Day War. Rafi described his experience as an airborne radar and electronic countermeasures specialist and his involvement analyzing installed equipment on a Russian built MiG-21 that was previously part of the Iraqi Air Force.

In 1962, Israel attempted to acquire a Russian supersonic fighter, the MiG-21. The aircraft became   an operational aircraft in 1959 with the Soviet Air Force. It was delivered to and used extensively in the Middle East by Egypt, Syria and Iraq Air Forces. The mission to acquire the plane was called Operation Diamond. The first two attempts to acquire an Egyptian or Iraqi aircraft failed. A third attempt involving a disgruntled Iraqi pilot was successful.

An Iraqi who was Jewish contacted Israeli officials and indicated someone he knew who was an Iraqi Air Force pilot and Christian wanted to leave Iraq. Israel offered the pilot one million dollars and would provide a means of escape from Iraq for the pilot and his family.

To aid in the escape, the national intelligence agency of Israel (Mossad), coordinated the escape of the pilot’s family to be smuggled through Iran and eventually on to Israel. The pilot while travelling outside of Iraq met with members of Mossad and was taken to an Israeli air base after a thorough background check confirmed his authenticity. Once arrangements were made, the pilot returned to Iraq and planned his escape.

The opportunity to defect came about on August 16, 1966. While the pilot was flying over northern Jordan, his plane was tracked by radar. The Jordanians contacted Syria but were reassured that the plane belonged to the Syrian air force and was on a training mission. When the plane reached Israel, it was met by two Israeli Air Force fighters, which escorted the MiG to a landing at an Israeli Air Base. Later at a press conference, the pilot said that he had landed the plane on “the last drop of fuel”. As a result of the methods and arrangements taken to acquire the MiG, it was renumbered in Israel as ‘007’. The number 007 came about since Operation Diamond looked a lot like a James Bond operation.   The pilot and his family were given a new life

How did Rafi become involved with ‘007’? He entered the Israeli Air Force in 1962, as an 18 year old recruit. With a background in electronics, he was trained as an airborne radar and electronic countermeasure specialist. As part of his military duties he was tasked with developing on-board aircraft systems to be used against enemy aircraft.

Shortly after the MiG arrived in Israel, Rafi was directed to inspect the MiG and secure selected pieces of equipment to be used as part of his air force project. Rafi secured the needed equipment from the MiG and proceeded to complete his assignment. Subsequent to completing his project, the Air Force wanted to mass produce his new system using transistors. An electronics manufacturer was selected and Rafi was directed to train the manufacturer in the system he created. Four months prior to the June 1967 Six-Day War Rafi completed the training and completed his active-duty military service.

Tourists and foreign workers were directed to leave Israel. The country began preparing for hostile action by preparing bomb shelters, digging trenches, activating black-outs and preparing for casualties. Reliable notification for the population was limited, due to the lack of Israeli television service and some of the population only had access to Arab television, which was not trusted.

Fifteen days before the start of the Six-Day War, Rafi was called up for his reserve duty. Under orders from his superiors, Rafi was directed to work with the electronics manufacturer to construct and install one unit per day in designated aircraft. Each day he would travel to the company location, perform a QA test and install each approved system in a Mirage fighter.

One day prior to the start of the war, he was picked up earlier than usual and flown by helicopter to two different bases, one in the north of the country and the second in the south near the Egyptian Sinai border. Each location was needed to update operational aircraft with the system Rafi developed. Arriving at the base in the South, as he was getting off the helicopter, he tripped and twisted his ankle. His injury did not stop him from completing his assignment. After installing the unit he installed the antenna and while walking away from the aircraft, the area was under total blackout – he fell into a trench injuring his right knee.

On Day 1 of the War, Rafi was in a clinic for his injury. He was transported by available truck to a hospital. While in the hospital he contacted his uncle, who was the local Chief of Police. Rafi was picked up by his family and for the remaining days of the war, he was recovering from his injuries.

The technical knowledge that Rafi had at the time of the war was critical in preparing the aircraft for combat. It’s quite possible that in the Six-Day War (1967), his device contributed to the Israeli forces domination of the airspace.

In January 1968, Israel loaned the MiG to the United States, which evaluated the jet under the HAVE DOUGHNUT program. The transfer helped pave the way for the Israeli acquisition of the F-4 Phantom, which the Americans had been reluctant to sell to Israel.

Rafi visited Israel with his family in 2017 and again in 2018. During the visit he went to the Israeli Air Force Museum and requested permission to photograph the MiG-21 in the museum. He questioned the tour guide regarding the MiG and asked about a rumor he heard. Apparently the MiG at the museum that was loaned to the US and eventually returned, was not the same MiG that was brought to Israel by the Iraqi pilot. The answer to why the plane was different is reserved for another day.

At the conclusion of the program a question was asked regarding the nature of the equipment installed in the MiG and what was installed in Israeli aircraft. Rafi noted that after completing his military service he worked for Israeli Security Service, equivalent to the FBI and one of the instructions from this work was to not say things you do not have to say.