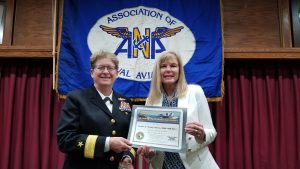 The Grampaw Pettibone Squadron was pleased to have as guest speaker for their April meeting, Rear Admiral Sandy Adams, USN, Retired.  The Admiral served as a Naval officer for 34 years, retiring in 2015 from her final assignment as the Deputy Commander, Navy Expeditionary Combat Command which is responsible for 19,000 active and reserve Sailors including Seabees and Coastal Warfare professionals.  The Admiral’s presentation was on the history of women serving in the uniforms of the United States military beginning officially in 1901, but even earlier when circumstances required.

The Admiral began her presentation by noting that she is a volunteer ambassador for the Women in Military Service for America Memorial (‘Women’s Memorial’), located at the Ceremonial Entrance to Arlington National Cemetery in Arlington, Virginia.  The memorial, established in 1997, is the only major national monument honoring all women who took part in defending America.   She encouraged attendees to reach out to women they know who served and let them know they are recognized.

Admiral Adams spoke about many contributions women made in the military dating back well before they were legally able to enlist.  The Admiral noted that the U.S. Census did not ask for information on women’s military service until the 1980 Census. Tallied information revealed that 1.2 million responded in the affirmative.  The Admiral indicated the number has grown to almost 3 million.

Women did not officially begin to serve in the military until 1901, when the Army Nurse Corps was first formed, nearly 20 years before women had the right to vote.  Changes in our nation’s laws, changes in military regulations and cultural changes led to the increased participation of women in the military. Even prior to 1901 women volunteered to serve, beginning with the American Revolution. 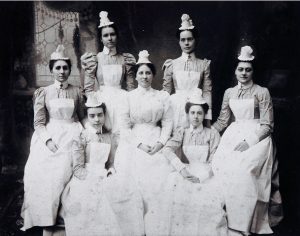 Before women were able to serve in recognized military roles, they stood proud in early roles dating back to the American Revolution both in the field and at home.  In the field women often followed their husbands in the Continental Army.  These women often tended to the domestic side of army organization, washing, cooking, mending clothes and providing medical help when necessary.   Sometimes they were flung into the vortex of battle. Such was the case of Mary Ludwig Hays, better known as Molly Pitcher, who earned fame at the Battle of Monmouth in 1778.  She replaced her wounded husband at his artillery piece, firing at the oncoming British.   In a similar vein, Margaret Corbin was severely wounded during the British assault on Fort Washington in November 1776 and left for dead alongside her husband.   She lived, though her wounds left her permanently disabled. History recalls her as the first American female to receive a soldier’s lifetime pension after the war.

During the War of 1812, Mary Ann Cole served in the American Army as a hospital matron during the siege of Fort Erie, where 1,800 Americans were killed or wounded in action.    Mary was caring for those sick in the hospital, preparing their meals and giving out medications as well as keeping medical records for the Regimental Surgeon.

During the U.S. Civil War, Dorothea Dix volunteered her services one week after the Civil War began.   She was appointed to organize and outfit the Union Army hospitals and to oversee a nursing staff of 3000 civilian nurses who provided aide and service for Union soldiers.   As superintendent of women nurses, she was the first woman to serve in such a high capacity in a federally appointed role.

According to our speaker, during the Spanish American War some 1500 women served as nurses in hospitals supporting U.S. forces.  They were stationed in the United States, Puerto Rico, Cuba, Honolulu, the Philippine Islands and on the Hospital ship “Relief.”   Sometimes the physical conditions the nurses were exposed to resulted in their contracting the same diseases and illnesses as the troops.  The organization and need of a qualified nursing program led to the decision to create an Army Nurse Corps, beginning in 1899 and which was finalized by 1901.

As of 1901, the establishment of the Army Nurse Corps with a headcount limit of 100 nurses formalized the presence of women in the military.  The Army Nurses Corps were the first to be recognized for military service, but their salaries and benefits were less than men in similar roles.  Veterans benefits or military funerals were not recognized.   In spite of the limitations imposed on them, women still volunteered and served.    In 1908 the Navy Nurse Corps was established.  Women serving in the Navy, Marines and Coast Guard did receive equal pay and benefits.    Among the first group of Navy nurses was Lenah Higbee, who would go on to become Superintendent of the Navy Nurse Corps during WWI, the first woman to receive the Navy Cross and to have two ships named in her honor.

During WWI, about 35,000 women served in the military with more than 21,000 as Army nurses with half sent overseas.   African-American nurses treated 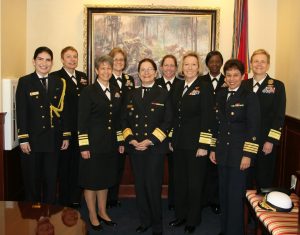 both African-American servicemen and German prisoners. The U.S. Navy enlisted 11,000 women as Yeoman (F) in various support roles.  More than 400 military nurses died in the line of duty while serving near combat and through exposure to various diseases.

Our speaker noted, U.S. entry into WWII included, 16 million men in uniform and around 350,000 women.  The breakdown of women in service was as follows; Army (WACS) – nearly 100,000 total, plus 57,000 Army nurses with 2/3 serving overseas; Navy (WAVES) – 80,000 total, with 14,000 nurses;  Air Corps(WASPS) – a little over 1,000; Marines – 18,000 and Coast Guard (SPARS) – around 13,000. The 6888th, Central Postal Directory Battalion with a unit population of 855 enlisted and officers, was the only all-black  all-female battalion serving overseas. Upon arrival in England in February 1945, they were assigned to sort and forward mail that had been held and undelivered for nearly two years.  They completed the task in less than three months and were sent on to other locations in Europe for similar assignments. Of the total number of women in uniform, some 400 military women lost their lives during WWII and an additional 90 were POWs.

Though in existence for less than two years and not considered a military unit, WASPs (Women Army Service Pilots) flew over 78 different types of aircraft in the United States.  They flew aircraft from factory to ports of embarkation, flying more than 60,000,000 miles. Some 38 WASPs lost their lives performing their duties during this period.

During the war, General Eisenhower had been against the formation of women’s units.  However, in giving testimony to Congress, he recognized the significant achievement women made and publicly acknowledged that he was wrong in his prior comments.  He went on to fight for women’s rights who served in the military. In 1948, the Women’s Armed Services Integration Act a United States law was passed.  It enabled women to serve as permanent, regular members of the armed forces in all branches.  Participation was to be limited to 2 percent of total enlistments and promotions were limited to prevent roles where women could supervise men.

During the Korean War (1950-53), approximately 1000 women in uniform served primarily as Army Nurses near combat zones.  Thirteen women nurses were part of the Inchon Landing, to help set up a MASH unit. Additional service included staffing hospitals in Japan and on-board ships.

Women served during the Vietnam Era (1956-1975) with more than 265,000 throughout the world in various roles.  About 7,500 served in Vietnam mainly as nurses. While other duties were limited, women did perform administrative and other non-combat technical roles.   Eight women died from illnesses, aircraft crashes and direct enemy action while serving in Vietnam.

In 1967, new legislation repealed the earlier law that limited service to two percent of total service members.  Women’s participation had grown to eight percent by 1981 and today it is approaching 20% for all branches. Limitations on promotions were removed in 1967.   By 1969, ROTC opportunities were opened to women in the Army and Air Force and by 1972, women were admitted to Navy ROTC programs. In 1974, the U.S. Navy approved the first pilots and the U.S. Army, the first helicopter pilots. 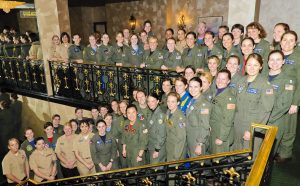 The Admiral proudly described the stellar achievements of women in the military.  The period known as the Cold War (1975-1990), Brigadier General Hazel Johnson made history by being the first African-American woman to become a General in 1979.    Women were no longer forced to leave the service if they became pregnant. In 1976, women were admitted to the service academies and the U.S Air Force authorized pilot training for women, but limited it to non-combat roles.   By 1978, women were allowed to serve aboard naval ships as part of the crew.

By the 1990s women made significant strides serving our nation in uniform.    41,000 women were deployed as part of Desert Storm and Desert Shield, representing 7% of deployed forces.  During this same period women trained and flew combat aircraft. The opportunities, advancements, challenges and risks continue to grow for women in service.   Through 2012, the Army reported that 437 women earned awards for valor to include two Silver Stars, three Distinguished Flying Crosses, 31 Air Medals and 16 Bronze Stars.  Women have advanced to significant leadership roles:  US Army – General Ann E. Dunwoody, 4th star in 2008; US Air Force – General Janet Wolfenbarger, 4th star in 2012 and Admiral Michelle J. Howard,  4th star in 2014.   Women served on submarines beginning in 2013 and the previous gender ban was lifted to enable all qualified personnel to serve in all areas of the military.   Since 9/11, 169 women have lost their lives while serving in Iraq and Afghanistan.

The Admiral closed her remarks with a quote from Anne S. Brehm, who served as a 1Lt., U.S. Army Nurse Corps in WWII.   “Let the generations know that women in uniform also guaranteed our freedom.

That our resolve was just as great as the brave men who stood among us.    And with victory, our tears fell just as hard.”