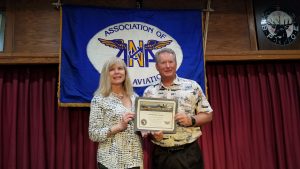 The  Grampaw  Pettibone  Squadron at their Aug meeting was pleased to have Steve Rose ,  Commander, US Navy (Ret) introduced by the unit’s Operation Officer, Cindy Macha.   Steve shared his experience flying a C-53 aircraft from Riverside, CA to Normandy, France and other parts of Europe for the 75th Anniversary of the D-Day celebration.

Steve began his talk by reviewing his aviation background.  Steve retired as a U.S Navy pilot flying the P-3 Orion.   Following 20 years of naval service, Steve spent 21 years as a United Airlines pilot.  Following his naval and airline career, Steve seeking other aviation related opportunities, joined the Commemorative Air Force(CAF) where he became a qualified pilot flying the C-53 transport and T-6 trainer.  The C-53 is a variation of the DC-3/C-47 that was built to only carry passengers and not designed with double-wide cargo doors to transport freight or heavy equipment.   The C-53 aircraft named “D-Day Doll” belongs to the CAF Inland Empire Wing in Riverside, California.   The plane is a veteran of the D-Day operation and participated in three flights, including towing a glider with troops during the June 6-7 operation in 1944.

Steve reviewed the history that led to the historical flight for the D-Day anniversary observance.  Discussions began some three years prior at the CAF to take the C-53 and fly it to France for the then upcoming D-Day celebration.   Most involved in the discussion were sceptical it could occur.  One year later, however, the plan was underway to begin the steps of raising funds and preparing the aircraft.    Much of the work involved preparing the aircraft for the flight by adding needed modern navigation equipment to satisfy international requirements for the Atlantic crossing as well as meet European requirements.    The aircraft was painted and nose art enhanced to prepare for the event.

Fund raising for the flight was an additional task and some of the needed upgrades were met in kind with donations from vendors, such as the Goodyear Tire Company.   Additional equipment was either donated or acquired with the receipt of financial support from many sources, such as: individual, community  as well as corporate contributors. 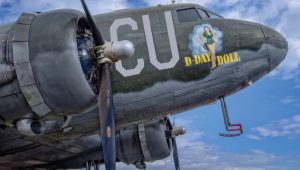 Steve noted that the beginning of the trip started by introducing the plane and the mission at a local air show held annually at the Chino Airport in Chino, California.  One of the highlights of the Planes of Fame Air Show was a parachute drop from the D-Day Doll.  Among the jumpers was 97 year old, Tom Rice, a  veteran who had jumped in D-Day some 75 years earlier.  Though the veteran jumped in a tandem harness, it was nevertheless a significant  event that day.

The first stop of the flight beginning May 8 was Tucson, Arizona.   Fund raising still occurred along the way and was highlighted by contributor’s attendance at the plane’s  arrival at each stop.   Retired three-star Air Force General Eugene Santarelli who assisted in collecting monies was on hand to greet the plane in Tucson.

One of the  stops along the way included; Louisville, KY, where, during WWII, the field was used for military glider tow training.  Steve surmised that the CAF plane may have trained at the field during that period.

Steve noted that part of the memorabilia  collected during the flight was the signature of every veteran that visited the plane.  The signature board will be preserved as a memento from the flight and mission.

A stop at Urbana, Ohio, Grimes Field was a stop for a planned parachute jump near the Air Force Museum at Dayton, Ohio.   Due to poor weather conditions, the jump was cancelled, however, among the veterans who visited the plane was 99 year old,  former 1st Lt. Alfred Leland Pepper.  Lt. Pepper is a decorated WWII pilot, flew the C-47 over the ‘Hump’, and other twin-engine aircraft during WWII.  As a former C-47 pilot, the Lt. was ready to join the flight and travelled with the aircraft from Grimes Field to Columbus, Ohio a 30 minute flight, thrilling Mr. Pepper and his family.

The C-53 was joined by a group of similar DC-3/C-47 aircraft gathered at Waterbury-Oxford Airport in Connecticut for a four-day kickoff on May 15-18. During the kickoff, the crews received specialized training, conducted Atlantic flight briefings, and practiced formation flying, including flights over Pratt & Whitney headquarters and an iconic flight down the Hudson River over the Statue of Liberty.

The equipment tested in Connecticut included a survival suit called the ‘Gumby Suit’.  Steve volunteered to try on the suit, a suit that would be needed in the event the aircraft suffered any mechanical  issues resulting in a forced water landing.  Additional equipment to be tested was a six-man raft, found to be very crowded when all in the raft are wearing the ‘Gumby Suit’.

Steve described the kickoff week ending with a mass takeoff of C-47s on Sunday, May 19 with a stop at Presque Isle, Maine en route to Goose Bay, Canada. Other stops on the way to Duxford  include; Narsarsuaq, Greenland; Reykjavik, Iceland; and Prestwick, Scotland.   Weather was challenging, including one landing with a 40 knot headwind, cloudy conditions and cold temperatures with snow on the ground.  The flight landed in Prestwick, Scotland on May 24 and remained until May 27.

There was an overwhelming greeting received when the aircraft and the flight landed at Prestwick, Scotland.  Each stop along the trip was greeted with positive and gracious enthusiasm.

After leaving Prestwick, the plane flew on to Duxford, England; the home of the Imperial War Museum and American Air Museum.    During the stop at Duxford from May 27-June 5, Steve piloted the D-Day Doll for an air event from June 2-5, that commemorated the 75th Anniversary of the D-Day event.   According to Steve, crowds were 20-30,000 people for the event.  The event known as “Daks Over Duxford” featured the collection of DC-3/C-47/C-53 aircraft along with a cross-section of well known collection of WWII era aircraft.   Among the permanent displays at Duxford is a line of etched glass screens.  Each screen documents the losses of U.S. aircraft by type and squadron.

On the morning of June 5, Steve piloted the aircraft from Duxford across the English Channel to Cherbourg, France and picked up 18 British paratroopers releasing them over Carentan, France  before returning to Duxford.  The afternoon of June 5th, Steve picked up 18 more jumpers and released them over Sannerville, France.    Between the morning of June 5 and afternoon of June 9, Steve piloted the “D-Day Doll” on seven flights and dropped a total of 126 paratroopers at the following locations; Carentan, Sannerville, Ecausseville, La Fiere,  Lessay and La Fiere again.

Steve explained that on June 6, a flight was to depart and overfly the American Cemetery  at Normandy.  The flight was delayed awaiting the arrival of Air Force One.    Once Steve launched, the flight  was delayed in overflying the cemetery and flew over the famous Pegasus Bridge a number of times as well as Point Du Hoc.

In discussing the logistics of the events, Steve noted that the organizers failed to provide any food or water for the crews, leaving the crews on their own to find needed nourishment.  Steve’s crew did have some time between flights to visit some of the sites in the Normandy region.  Cities such as St Mere Eglise, Caen and Carentan, as well as Utah beach.

The ceremony at Normandy culminated in the fly over of more than one dozen C-47/C-53 aircraft with  a sample of paratroopers jumping similar to the events that occurred some 75 years prior.

Our speaker explained that after the D-Day celebration ended on June 9, the collection of C-47/C-53 aircraft departed France and flew on to Wiesbaden,  Germany landing at Clay Kaserne airfield.   The trip was to celebrate the 70th Anniversary of the Berlin airlift’s end.  The event featured  static displays and air demonstrations involving vintage aircraft — including C-47s, the same airframe used during the Berlin Airlift — and a staged candy drop.  Mini-parachutes were created and thousands of pieces of candy were packaged and dropped at Wiesbaden to recreate the famous ‘Candy Bomber’ drop.    Colonel Gail Halverson, the pilot who originated the idea to drop the candy was on-hand to witness the event.

Between  June 13 – 15 at Fassberg, Germany the flight gathered, serviced and refueled the aircraft.  On June 16, the flight in a low level close formation performed for the local population.  The final European stop was at the Paris Air Show, June 19-24.

Steve Rose and the Riverside crew departed Europe on June 24 and returned to the U.S. along the same general route it originated the flight.   Six stops for fuel and diverting for weather, the plane returned to the US on June 29.  After returning to the US, D-Day Doll flew on to Oshkosh, Wisconsin on July 1, remaining there until July 29.  The crew left the plane in Wisconsin to return home for a break.  Returning to Wisconsin, with two last fuel stops, the plane and crew departed Oshkosh and returned to Riverside, CA on Monday, August 5 to a large crowd and hearty congratulations for a job well-done.

At the same meeting that the D-Day trip was shared, there were some very special guests present from the Seal Beach Naval Weapons station, They were the Sailors of the Quarter for April thru June.  Present were the Junior Sailor of the Quarter–MA 2 Matthew Pace and the Bluejacket of the Quarter–MA 3 Katherine Parsley.  Certificates of Appreciation were presented to them by the Commander of the Grampaw Pettibone Squadron–Tim Brown.  The sailors were introduced by CMDCS Paul Ellis, the Command Senior Chief for the Weapons Station.  Some other Sailors of the Quarter were not able to attend because of duty responsibilities.