Action Taken: Warrior for the Hostile Skies – The Thunderchief in Vietnam 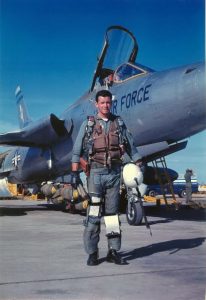 Captain Gary Barnhill, illustrious Air Force pilot whose missions included hazardous and challenging F-105 missions over North Vietnam in the highest threat air environment of the entire Viet Nam War, will share his presentation “Downtown, everything is waiting for you” from Petula Clark’s 1964 hit song. “Downtown”  referred metaphorically to Hanoi.  “Everything is Waiting for You” was the pilot’s gallows humor for the SAM missiles and Anti-Aircraft Artillery that greeted each entry into North Vietnam airspace. He will briefly describe flying the high-accident-rate F-100C in Europe circa 1958 and sitting Nuclear Alert as a still maturing young lad of 22. The main topic is flying the F-105 Thunderchief in 1965 during Rolling Thunder; the air campaign to bomb targets in North Vietnam, which lasted until late 1969.  He will “take you along” on an aerial refueling episode with an extremely unusual ending.  He will also “take you along” on an interesting Hunter Killer “experimental” mission to find and destroy a SAM missile, which up to that time, had never been accomplished. After 11 years in USAF, there was a brief flirtation with CIA, a career with Trans World Airlines, air show performer, and founder of a B-747 pilot leasing firm.