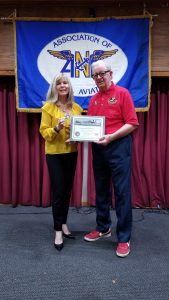 The  Grampaw  Pettibone  Squadron at their September meeting was pleased to have Captain Gary Barnhill ,  introduced by the unit’s Operation Officer, Cindy Macha.   Gary shared his experience flying as an Air Force pilot with particular focus at the controls of a Republic F-105 Thunderchief in Vietnam.   Gary spent  11 years in the US Air Force, 1956-1966, completing his service as a Captain.   After his military service, Gary went on to fly as a commerical pilot for TWA.

Gary’s presentation was not the first time he provided information to ANA.    In the Wings of Gold Winter edition 2004/05, Gary contributed an article regarding the F-105 SAM Hunter-Killer Missions in Vietnam in 1965.  Subsequent material was presented at this meeting detailing this mission.

Our speaker joined the Air Force when he was 20 years-old and began his military flying career in a piston-powered Beechcraft  T-34 Mentor, followed by the North American T-28 Trojan, and then graduating to the Lockheed  T-33 Shooting Star jet to receive his wings  and promotion to 2Lt in September 1957.  Gary then moved on to gunnery training in the Republic F-84 Thunderjet prior to advanced gunnery school at Nellis Air Force Base in the North American F-100C Super Sabre, where he was trained to deliver a nuclear bomb.  Upon completion of advanced gunnery school, our speaker’s first assignment in 1958 was Ramstein Air Base, Germany where he was assigned to an F-100C squadron.

Gary noted  that warnings from U.S. Air Force F-100 evaluation test pilots to not acquire the aircraft, were not observed and the Air Force acquired 2194 copies of the F-100A.  Particularly troubling was the aircraft could develop a sudden yaw and roll which would happen too fast for the pilot to correct and would quickly over-stress the aircraft structure to disintegration.   Another control problem stemmed from handling characteristics of the swept wing at high angles of attack.   As the aircraft approached stall speeds, loss of lift on the tips of the wings caused a violent pitch-up.  This particular phenomenon (which could easily be fatal at low altitude where there was insufficient time to recover) became known as the “Sabre Dance“.   Gary noted that from his own training class on first assignments, six of 13 pilots had died flying the F-100A.  His comment , “Too much airplane, too little experience”.  The role of the F-100A was to be a delivery platform for a nuclear device, with capability 5 times greater than the bomb dropped on Hiroshima.

Gary was selected three years later in 1961 to join an Air Force Formation Aerobatic Team, the Skyblazers, which was flying the F-100C.  The team performed at locations in Europe and the Middle East.  However, before the 1962 season began the team was disbanded.  Team members were offered choice assignments and Gary selected a position as an instructor pilot in the then new Mach 2, F-105 Thunderchief.

Following time as an instructor pilot, Gary was sent to Vietnam.  Describing his experience in Vietnam, Gary noted that his assignment during operation  “Rolling Thunder” was hampered by command decision to not attack known military or supply sources in North Vietnam.  Operation Rolling Thunder was the title of a gradual and sustained aerial bombardment campaign conducted by the United States against North Vietnam from 2 March 1965 until 2 November 1968.

A popular song of the 1960s was “Downtown”, sung by Petula Clark.  First introduced in late 1964, it took on a new meaning for many pilots, particularly F-105 pilots who were flying into North Vietnam and eventually over targets in Hanoi and Haiphong.

During the presentation, Gary shared portions of the documentary, “Thud  Pilots”, a composite overview of the aircraft, crews and missions flown during the Vietnam War.   The film contained interviews with pilots, including Gary whose experience flying the F-105 in Vietnam disclosed many of the operational challenges faced by pilots.

The capability of the F-105 was explained by Gary in comparing the aircraft to the WWII, B-17.  The B-17 carried a crew of 10 with an average 4,000 pound bomb load to enemy targets , compared to a single pilot flying the F-105 and carrying 6,000 pounds of bombs.  This demonstrated the technical and engineering advancements that occurred over the 20 years between operational events.   In spite of the technical advances, according to Gary, out of the 762 built, 395 were destroyed in training and combat related events.

Gary explained that missions in Vietnam were 1300-1400 miles distance, between 3-4 hours operational time, unless technical or mission events interrupted the flight.   Mission length required mid-air refueling using the services of KC-135 aircraft.  During one such mission, the aircraft Gary was flying experienced a fueling malfunction when a fuel cutoff switch failed.   Within six seconds of being notified by another mission pilot of a fire on Gary’s aircraft, the aircraft exploded with Gary ejecting only one second prior to the aircraft being destroyed.   After ejecting out of the aircraft at 14,000 feet and with at least a 10 minute descent to the ground expected, Gary related his concern of landing in a dense forest and sustaining additional injuries.  Recalling a survival school program some weeks before the mission, Gary explained how he could control the direction of his descent by cutting some of the risers to collapse a portion of the parachute canopy .  Doing so enabled him to avoid the trees and land in a field.  Continuing to explain this event, Gary noted he was in radio contact with a rescue helicopter that was flying to his location.   Upon hearing the sound of the approaching helicopter, Gary elected to ignite some rescue flares.  The helicopter landed and picked Gary up and after securing him in the helicopter, the pilot explained that the signal flares assisted in the rescue since his radio malfunctioned and he would not have been able to be talked into the landing location.  Out of 183,000 mid-air refueling events going to North Vietnam, the fuel switch failure happened only one time.

Relating the events of his bailout, our speaker indicated he failed to obtain the name of the rescue pilot when he was picked up.   However, years later when flying for TWA, during a stop on a scheduled flight, Gary had a conversation with another crew member.  When comparing flying experience, the crew member shared his experience as a helicopter pilot in Vietnam and rescuing a number of pilots and one in particular who bailed out from his plane during a refueling event.  This other TWA crew member was the pilot who rescued Gary and provided closure regarding events of that day so many years before.

The presentation included a description of the defensive missile systems employed by North Vietnam.  The Russian  Surface to Air(SAM) missiles were first installed in North Vietnam in March 1965 and first used some four months later.  The missile described as a telephone pole in flight is 37 feet long with a 420 pound warhead travelling at Mach 3.5 or 2300 miles per hour, containing a proximity fuse with a 150 foot detonation range.   According to the speaker, a successful launch will take 3-4 seconds to reach a target altitude and detonation will disperse 3600 shrapnel fragments the size of a BB and with only a few impacting an aircraft, will bring it down.   Records indicate some 7800 SAMs were launched and 205 aircraft brought down in Vietnam.

Our speaker explained that over 10,000 AAA (Anti-aircraft artillery) systems were operating in North Vietnam with Hanoi being the second most defended city in the world after Moscow.  According to the information Gary shared, over 83% of all aircraft lost in combat were to AAA.

Missions were scheduled and carried out against known AAA and SAM site locations.  One scheduled mission with 24 aircraft attacked a known SAM site only to lose 6 aircraft in the mission.  After action reports and photos disclosed the fact the SAMs were replaced with dummy systems, poles painted to look like a launch site.  It was also surrounded by AAA.  Two additional retaliation missions were carried out a number of months later with photo confirmation of the sites location.  Using 1960s technology one aircraft was sent to target a site and identify when the missile system radar was activated on the ground.   As Gary described the mission, the weather was  overcast, however, the lead aircraft entered the clouds, requested a tight formation and descended to fly at tree top level towards the target.  He located the target but was shot down by ground fire.  Gary as number two aircraft attacked and was successful in destroying the target, but sustained damage.  Flying to the coast with a fire warning light and preparing to bail out, the light went out and Gary was able to return to a base and land safely.  The aircraft sustained 37 hits, including an embedded unexploded 37mm artillery round in the wing.  Fortunately, there were no fatal hits to the aircraft.   4000 man-hours later to make it air worthy, the aircraft was flown to a location for more extensive repairs.  The lead pilot who was shot down survived the crash but died in a POW camp.  Navy LCDR Trent Powers was awarded the Navy Cross posthumously for his actions.

Gary told the audience that the airborne assignments experiencing significant losses and failing to hit their targets was no accident.   Years after the U.S. left Vietnam it was revealed that the U.S. knowingly revealed the military targets to the North through intermediaries.  Secretary of State Dean Rusk when questioned on a T.V. program regarding U.S. plans did confirm that the U.S. government communicated through the Swiss to North Vietnam and identified the targets the day before planned missions.  The reason given, “they did not want to harm any of the North Vietnamese people”.

After his service our speaker briefly worked for the CIA before joining TWA as a pilot.  There he flew  the  Constellation, 727, 707 and L-1011.  In 1973 Gary flew a Pitts as part of a 3-ship formation air show act, called the “Red Knights”.  Following his brief experience as an air show pilot Gary started an aircraft leasing business for large commercial aircraft including the Boeing 747.

The Grampaw Pettibone Squadron and attendees thank Captain Gary Barnhill for a stimulating and revealing look at his experience in the U.S. Air Force.