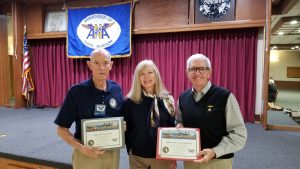 The Grampaw Pettibone  Squadron at their November 2019 meeting was honored to have Captain Bob Olds, USN (Ret) and Captain Stephen Tucker, USMC (Ret), present a program on the overland reconnaissance and sensor deployment program flown with the Lockheed P-2V Neptune aircraft.  Both Captain Olds and Captain Tucker made earlier presentations on their respective military experience and the squadron welcomes them back.  Squadron Operations Officer, Cindy Macha introduced both speakers.

Captain Tucker (Steven) began his talk regarding a top secret naval aviation squadron operating around the U.S. military base at Khe Sanh, South Vietnam from 1967-68 as well as launching missions from Nakhon Phanom, Thailand to monitor traffic along the Ho Chi Minh Trail in Laos.  The squadron was known as OBSRON 67, the ‘Ghost Squadron’ or VO-67.

Heavy intense movement of North Vietnamese Army(NVA) troops and equipment along the Ho Chi Minh Trail in the fall of 1966 encouraged the activation of a US Navy squadron operating  refurbished Lockheed P2V aircraft to plant acoustic and seismic sensors to search for targets and truck movements along the Trail.   The NVA, to protect the movement along the trail, heavily fortified trail defenses by installing mobile: 23mm, 37mm and some radar controlled 57mm guns.  With the buildup of this defense network, survivability of slow moving OP-2E mission aircraft was limited but considered critical to slow down the movement of men and supplies.

By November 1966, the mission known as IGLOO WHITE initiated and was operational by 15 February 1967.  In describing the crew compliment for the new organization, Stephen noted that the unit was top heavy with over 80 senior personnel from CPOs to Navy Captain and an enlisted staff of nearly 250 rated enlisted and airmen.  Organizational design was considered necessary to offset the lack of time needed for training and mission readiness.  In addition to heavy modification of the aircraft for this operation, crews were put through: survival rescue courses, counter-insurgency, operation indoctrination and aircraft familiarization, The heavy aircraft modification led to the plane re-designation as OP-2E.

Initial mission assignments saw the aircraft called upon to drop sensors surrounding the U.S. base at Khe Sanh, South Vietnam.  The improved targeting of enemy troops attacking the base was critical in reducing U.S. and allied personnel casualties.  According to Stephen, US Marine personnel estimated that casualties would have doubled without the benefit of the sensors and which did produce about 40% of the targeting opportunities.

Stephen then introduced Captain Bob Olds who presented information on the P2V/OP-2E aircraft.   Bob is an experienced P2V pilot with over 3700 hours in the aircraft in which 2814 hours were PIC.  The hours flown were in six of the eight versions of the Lockheed P2.   As noted, Captain Olds was familiar with the model aircraft and majority of versions.  While he did not serve with the unit in question, he did serve with the unit commander and other unit members on other assignments. 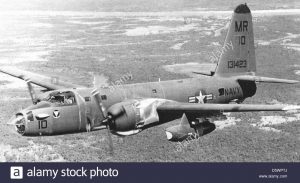 First produced in 1945, a P2V-1 Neptune in September 1947, demonstrated its versatility for flight endurance with a still unbroken piston engine long distance record to fly non-stop, unrefueled over 11,000 miles between Perth, Australia and Dayton, Ohio in 55 hours.  Over a 15 year period some 1181 aircraft were produced with seven distinct models and sub-models created in the first 10 years.  It was operational as a military aircraft, serving with 11 different nations between 1945-1984 and continues as a civilian registered aircraft today.

Bob noted that while the aircraft was built for the US Navy, it never landed on an aircraft carrier.  A version known as the P2V-3, “Nuclear Bomber” was lifted onto a carrier and did demonstrate the ability to launch from the USS MIdway with JATO in October 1949 and did set an endurance record from the USS Roosevelt in February 1950 of 5060 miles in 26 hours.  The intent was to demonstrate the capability to target a hostile force with a nuclear device, fly to a safe land based location or return to the carrier and ditch at sea subsequent to recovering the crew.  This was an interim program which ended with development of the North American AJ Savage which could launch and recover from a carrier and be capable of delivering a nuclear device.

The following is a sample cross-section of the models identified by Bob in his presentation.

The  missions would drop Sonobuoys used for tracking submarines, but were modified to track personnel and vehicle movement.  The devices  known as “Acubuoys” had sensitive microphones installed in the nose to replace hydrophones.  These devices were dropped from very low altitude to cover designated areas.   Accuracy in identifying enemy troop movement up to 438 yards and vehicles up to 1000 yards from such a device greatly aided U.S. forces in targeting movements without exposing personnel to direct contact.  The device had a 30 mile transmission range.  A second device known as ADSID (Air

Delivered Seismic Intrusion Detector) was a remote electronic sensor dropped from tree top level to 2500 feet by aircraft to track vehicles and human traffic movement through acoustic and seismic signatures.  Though a shorter range than “Acubuoys”, only 109 yards for vehicles and 33 yards for personnel, it was nevertheless successful in identifying movement.  The devices were painted to blend in with the surrounding jungle growth.  Once a signal was detected, it was relayed to a C-121 aircraft orbiting over the area.  The aircraft then relayed the signal to a major communication center in Thailand, which in turn transmitted results to strike aircraft near the target area to initiate a mission against enemy forces.  As part of the mission requirements, resurrection of the famous WWII Norden Bombsight was undertaken.   A total of 12 were overhauled and the relief pilots trained on their use.  The expectation was to enhance the accuracy of releasing the monitors at designated locations along the jungle trails that were being monitored.Steve noted that operational missions conducted in Vietnam were to plant sensors along the Ho Chi Minh Trail which extended into Laos.  Because the missions were classified as Top Secret, no records or orders were kept, medals and ribbons were not awarded, all crews were sworn to secrecy.

Implementation of the mission required training and support to increase the likelihood for success in mission planning and execution.  Mission pilots and  crews were assisted by members of the 23rd TASS (Tactical Air Support Squadron), also known as FACS (Forward Air Controllers ).  FAC pilots trained members of VO-67 to fly their mission, acquire their targets and avoid AAA fire piloting the FAC 0-2 aircraft.

Steve explained that flying conditions coupled with mission requirements  in East Asia were challenging.    Terrain was nearly 70% mountains around target areas and high humidity caused a haze that totally obscured the horizon.  Also, there were no lights on the ground in the mountains or jungle areas. Missions were executed using aircraft navigation instruments instead of visually flying with requirements that called for tree-top level flying.  The combination of mission requirements and visibility conditions created a challenging assignment for any flight crew. 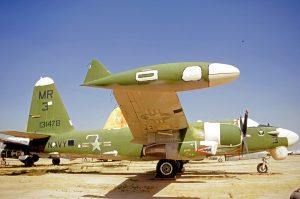 Should a mission aircraft be shot down, a Combat Search and Rescue (CSAR) Task Force was activated. Four A-1 Skyraider Aircraft, Two-HH-3E Jolly Green Helicopters and One-HC-130P Combat King (Command and Control a/c) carried out the rescue. CSAR saved 3883 lives at a cost of 71 rescuers and 45 aircraft.   A total of 3 aircraft and 20 crew members were lost during the brief operational life of VO-67 before it was decommissioned  on 1 July 1968.

One particular mission was described by guest Robert Ditchey.   On a mission where an aircraft was struck by AAA, Patrol Plane Commander CDR Paul Milius, remained at the controls until all bailed out.  One 0-2 FAC pilot, Maj. Sam Weaver, flew alongside the crippled OP-2E as the crew bailed out and plotted where each crewman landed. Another 23rd TASS FAC, Maj. Phil Mayinald, also came to the party and called in CSAR. Soon, A-1 Skyraiders  and  H-3 Jolly Greens were on scene.

The 19th Arleigh Burke Class Destroyer, MILIUS (DDG-69)was commissioned in 1996. She is named in honor of a courageous naval aviator, CDR Paul L. Milius, who gave his life for his aircrew during combat action over Laos in 1968, giving us our motto of “Alii Prae Me” which translates to “Others before Self”.

Some 40 years after Vietnam, recognition for the contribution made by the pilots and crews of VO-67 was realized.  The medals and citations that were not forthcoming at the time of their missions were finally recognized.  A representation of the awards included: Navy Cross, DFC, Navy Air Medal, Navy Commendation Medal, Purple Heart, and Navy Presidential Unit Citation,   VO-67 is the only P-2 squadron to ever receive the  “Presidential Unit Citation”.

The squadron wishes to thank our speakers for sharing their military experience and research on this little known topic.  The next squadron meeting on December 12 will feature Colonel Sherwood C. Spring, USA (Ret), a decorated combat veteran, distinguished scholar and NASA Astronaut.  Please join GPS to share in what should be a memorable program.