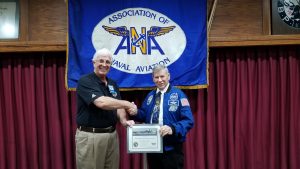 The Grampaw Pettibone  Squadron was doubly honored at their December 2019 meeting  to recognize the Navy Sailors of the Quarter as well as a presentation by Colonel Sherwood ‘Woody’ Spring, USA (Ret).  The Colonel presented  details of his aviation  and aerospace career as a NASA Shuttle Astronaut  and Mission Specialist.

Our speaker attended the US Military Academy at West Point graduating in 1967.  In 1968, he joined the 101st Airborne for a one year tour in Vietnam.  During his tour, he applied for flight school and completed training as a helicopter pilot in 1970.  With an 18 month obligation after flight school, he returned to Vietnam with the 1st Cavalry Division serving as a helicopter pilot from (1970-1971).  He flew the CH-47 Chinook as well as the UH-1 Huey and the OH-58.   Flying was the Colonel’s passion, but he thought it would be difficult to just fly in the Army.  Upon return from Vietnam, he received fixed-wing training en route to acquiring a Master’s degree in Aerospace Engineering in 1974.  He was accepted to the US Navy Test Pilot School (USNTPS) and completed his year of test pilot training in 1975.  He flew four years as a test pilot at Edwards AFB, (1975-1979) where he fulfilled his wish to just fly, while being surrounded by the latest technical advances in aircraft and aircraft systems.  Upon completion of his duties at Edwards AFB, the Colonel applied and was accepted by NASA for astronaut training and spent the next eight years in the program.

In May 1980, Colonel Spring was selected as an astronaut.  He explained that being an astronaut was not a full time job; and his other task was working in the Shuttle Avionics Integration Lab (SAIL).  His favorite part-time job was Shuttle Integration Testing.  It was very easy to show how much he enjoyed his work when he could not stop smiling after spending a week working at Kennedy Space Center.  His travel was spent piloting the Northrop T-38.  These assignments supported numerous missions prior to his subsequent selection as a crew mission specialist.

The Colonel served as a mission specialist on STS-61-B which flew November 26, 1985 through December 3, 1985.  He was responsible for launching three communications satellites and performed two EVA (Extra Vehicular Activity) events. During the EVAs, totaling more than 12 hours, our speaker investigated Space Station construction techniques.  This included, large structure manipulation while on the end of the remote arm; and a time and motion study for comparison between Earth training and space performance, with the EASE/ACCESS  experiment.   He logged a total of 165 hours in space.   After the Space Shuttle Challenger accident in January 1986, it was a three year period before a new shuttle team was announced.   During this period the Colonel was a member of the Kennedy Space Center Tiger Team for accident  investigation, then led the Astronaut Office EVA program until 1988. 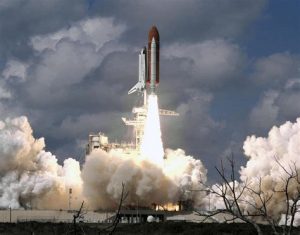 When the shuttle flight list was finally released for the next three flights the Colonel was not on the manifest as a crew member.   He returned to the Army to be a Program Manager for the Army Space Program Office (ASPO) to run the Army TENCAP (Tactical Exploitation of National Capabilities) program, which was a classified Intel program taking satellite Intel directly from space to the battlefield.  The Colonel retired in 1994 to become a defense contractor in the Intel field from 1994-2009.   In 2009, he joined Defense Acquisition University (DAU) as a professor teaching Engineering, Test, Science and Technology, Leadership Workshops and Coaching.  Colonel Spring has been married for 48 years.   His daughter is a doctor serving in the US Army and his son who coaches collegiate gymnastics was a member of the US Olympic Gymnastics Team in 2008 when it won a Bronze medal.

The Colonel described the major components of a shuttle launch:  the solid rocket booster, the shuttle itself and the external tank.  The latter is manufactured in Mississippi and was transported by barge to the Kennedy Space Center (KSC).  It is then raised by crane into a vertical position inside the Vertical Assembly Building (VAB), at one time the largest single room building in the world.   The VAB is so large it has its own weather.  On humid days, rain clouds can form below the ceiling, requiring about 10,000 tons of air conditioning equipment to control the moisture.  The external tank is 154 feet tall, held 535,000 gallons of propellants -390,000 gallons liquid hydrogen and 145,000 gallons liquid oxygen – which fuel space shuttle main engines through 17-inch-diameter feed-lines.  The external tank was covered with spray-on foam insulation that kept the liquid hydrogen at -423 degrees F. and liquid oxygen at -297 degrees F., even in the hot sun.  The tank’s propellants would stay liquid only if kept at cold, or cryogenic temperatures. The tank’s foam insulation maintained these temperatures to minimize ice build-up while the tank was on the launch pad and to protect the tank from booster, main engine and aerodynamic heating during launch.   If upon release from the shuttle after a launch the tank heads towards a populated area, the cable attached at the top of the tank and extended the length which is detonation cord will be activated in order to blow up the stack before doing any damage upon landing.

The Colonel described the two Solid Rocket Boosters (SRBs) which are bolted to the Mobile Launcher Platform.  SRBs provide 71% of the 7.5 million pounds of thrust from all engines at launch.  At launch the “rain bird” will keep the deck awash with water to separate the gantry from the combined engines thrust at take off.  If they do not do that, there will be a primary or harmonic frequency for every strut and beam in the gantry backed up with seven and a half million pounds of force/energy, which would destroy the gantry in about 30 seconds.

Our speaker toured the Shuttle Processing Facility(SPF) at Palmdale, CA prior to his launch in 1985 and was able to view the assembly process of the mission shuttle.  When visiting, one of the team who was a crew member of a prior launch was wearing a jacket with a patch that read “25” for the shuttle Mach speed.  One of the administrative members of the facility was visited by her boy friend an SR-71 pilot who was wearing a jacket with a patch that read “3”.   The Mach 25 patch carried considerably more recognition than the Mach 3 patch.  The facility assembly included; three Space Shuttle Main Engines (SSMEs) and additional assembly components that included: one Orbital Maneuvering System (OMS) and Reaction Control System (RCS) thruster. 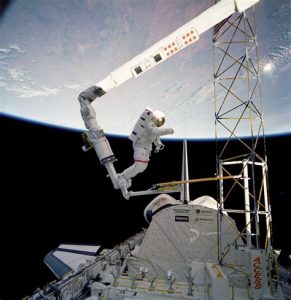 The Colonel described how the propellant, known as hypergolic propellant functioned. A combination of a fuel and an oxidizer in a rocket engine is one whose components spontaneously ignite when they come into contact with each other.  Hypergolic propellants are that they can be stored as liquids at room temperature and that engines which are powered by them are easy to ignite reliably and repeatedly.   .

The shuttle with engines attached is moved to the VAB and raised to a vertical position to attach the external tank and SRBs.  The payload is prepared in the Payload Preparation Room (PPR), inserted into a surrogate container to protect the contents on its way to being loaded into the Payload Bay (PLB).  It is moved by crawler to the launch pad where it is lifted into the Rotating Service Structure (RSS).  Requirements for environmental controls must be maintained to protect both manufactured loads as well as experiments with test animals.

The shuttle is moved 3.5 miles from the VAB to the launch pad on a crawler that will take 6-8 hours to complete. The bed it moves on is not concrete but goose-egg size gravel.   If he gravel were any larger, it would be crushed, any smaller, it would not dissipate the load. The gravel goes down about 25 feet. The water table is at 8.  The shuttle can spend an indefinite time at the pad (weather permitting), but once tanked with slurry cryogenic O2 and H2 at 425 degrees F., it must be launched within 72 hours or it needs to de-tanked and allow the metal to return to normal for 12 hours to preserve inherent strength.   The shuttle is monitored to keep birds, particularly woodpeckers, from attacking the foam body.

“When shuttle launch occurs it is like getting hit by a sledge hammer accompanied by a roar”,  the Colonel described. Lift off is instantaneous at 2-Gs. and accelerates to 3-Gs and stays there until SRB separation at the 2-minute point.  Ride the 3 main engines for another 6.5 minutes and you are on orbit going 17,500 miles per hour with an insertion altitude of about 120 miles up. There is a burn 45 minutes later on the other side of the earth to circularize the orbit and enter space.

The Colonel reviewed mission requirements including being able to fit inside a Personal Rescue Sphere, a very small rescue ball, 36 inches in diameter and designed to be used to rescue astronauts.  If one is claustrophobic, this device will eliminate them from selection due to the  very small confined space.   Another device shown is the Manned Maneuvering Unit(MMU) which allowed the astronauts to perform  un-tethered  extravehicular  spacewalks at a distance from the shuttle.  Training took place in a water training facility wearing the MMU to simulate a weightless environment.  Other training took place in an aircraft, the KC-135, flying in a ballistic trajectory from 40,000 feet to 20,000 feet and creating a weightless test environment for about 25 seconds.  The cockpit instruments went through design changes.  The first had “steam gauges” the second “tape instruments”, and the third and last a “glass cockpit”. The CRT screens have also been upsized and made multicolor versus the original monochrome dark with green letters. (a reliability issue).

The presentation included photos of earth taken from Atlantis during the mission.   A slide was presented detailing the construction of the space station modules and identifying the international contribution.

Life on-board had its challenges.  Sleeping in orbit required being secured in one’s sleeping bag and tied to one location to avoid floating through the cabin.  Exercising and food intake is critical to building muscle and preventing muscle atrophy or bone density loss in a non-gravity environment.  Liquids behave differently in the absence of gravity.   Droplets become balls that can float but caution needs to be taken to avoid getting on clothes or in the avionics locker, due to positive air flow.  When using the toilet facilities; a funnel collects liquid with a partial vacuum or separation air flow. There are foot restraints so one doesn’t float away.   A stainless tin is used with the same vacuum hose to hold the wipes and paper that are invariably needed when using the facilities. A canister in the unit is a charcoal odor filter, thigh restraints and hand holds are needed to secure the operator during non-liquid waste release.

The Colonel concluded his presentation by describing proposed future missions: Artemis Phase 1, a return to the moon and establishment of a moon base at the South Pole beginning in 2024, followed by Artemis 2, sustainability at the moon and launch missions to Mars by 2035.

The  Grampaw  Pettibone  Squadron and attendees thank Colonel Spring for a stimulating and revealing look at his experience as an astronaut and mission specialist on STS-61.