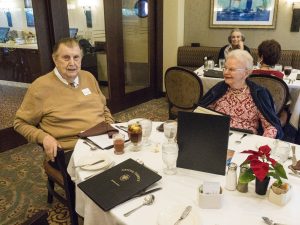 Our longtime OP-Plan Editor, Hal McDonnel, passed away on Saturday, 14 December 2019.  Hal was a dominant force who joined GPS as a Life Member in 1988.  Just in time to be a major contributor in the Squadron’s hosting of the very successful 1989 ANA National Convention in Anaheim.  He brought that “new thing”, computer skills, to the management effort.  Suddenly finances, reservations, seating plans, etc. all had a wonderful and more effective way of being accomplished.  I joined a few years later, and at that time he was editing the very complete and informative Op-Plan. If there was an award for best newsletter in ANA, my bet is that Hal would have won that award, as the Grampaw Pettibone Squadron was envied throughout the national organization for the quality of its newsletter.  He was a great Editor and took pains to get it right before it was mailed.

Those were the days when there was a lot of cutting and pasting of articles that were not necessarily in professional form or format before Hal received them.  He was a master at taking that sow’s ear and making that purse.  How many times did he send a message to get my column to him so he could finish the OP-Plan and get it to the printer?  For the many years that I was associated with Hal I do not remember one month when he did not get it in the mail in a timely manner.

And on the Staff there was always the challenge of getting a vote from Hal to spend money.  He was a tough nut to crack when it came time to purchase a new canopy or printer or whatever the squadron needed.  He was a good negotiator too!  He was always so proud of his contract with the company that printed the OP-Plan.  And when there was a challenging issue that the staff had to tackle, there was Hal right in the middle of the discussion.  He more often than not got his way too.  Just a great person to have around.

In 1992 Hal received a much deserved Fellowship Award from GPS.  The award is given to members or friends of GPS whose contribution of service and dedication to the squadron is significantly above and beyond that which is expected.  Hal served on, and definitely contributed to, the very active GPS Staff for all of the 41 years he was a member!   Additionally he served as our Commanding Officer 2007- 2010.  Hal contributed to the long term viability and success of GPS in a multitude of ways.   We will most definitely miss our Shipmate.