The Grampaw Pettibone Squadron was doubly honored at their January 2020 meeting to recognize the Navy Sailors of the Year as well as a presentation by Captain Jason Sherman USN.  Captain Sherman is the Commanding Officer of the Seal Beach Naval Weapons Station and spoke about his career and background in the U.S. Navy.  The Captain was introduced to the audience by Squadron Commander Tim Brown.

Captain Sherman opened his comments recognizing the contribution the Association of Naval Aviation and particularly the Grampaw Pettibone Squadron serves for the naval community with additional acknowledgment for the stories that are shared by each of the local squadrons in the quarterly magazine Wings of Gold.

The Captain noted that his military career began in 1986 at the age of 12 after seeing the movie “Top Gun”.  He knew at that time he wanted to be a Naval aviator.  His motivation was assisted along the way through the influence his grandfather had on his life.  Completing high school, Captain Sherman went on to attend The Ohio State University while working full time.  He committed himself to an aviation program and as a Freshman joined the ROTC.  In his sophomore year, he earned a scholarship.   He was focused and determined to graduate as quickly as possible.  Upon graduating he received his commission and was selected for the Navy flight program.  During his time in Navy Primary Flight Training, he learned what it meant to compartmentalize his emotions when his grandfather died.  He completed the flight program and was designated an Unrestricted Naval Aviator, able to fly fixed and rotary wing aircraft in February 1999.

In March 1999, our speaker was first assigned to HSL-40 “Airwolves” in Jacksonville, FL where he began flying the SH-60B helicopter.   His first fleet assignment was with HSL-46 “Grandmasters” and served on two deployments.  Between deployments, Captain Sherman got married.  In 2002 he received HSL-46 Maintenance Officer of the Year Award and based on recommendations from his Commanding Officer and XO, was recommended for Fleet Replacement Squadron (FRS) as an instructor.

In January 2006, he reported to Commander, Carrier Air Wing TWO (CVW-2) and deployed in the SEVENTH Fleet Area of Responsibility (AOR).

In March 2008, Captain Sherman reported to HSL-47 “Saberhawks” and deployed as the Officer-in Charge of a detachment.  He then changed aircraft to the MH-60R which had a glass cockpit, digital communication suite, fully programmable keysets with GPS and INS capability.  HSL-47 transitioned to Helicopter Maritime Strike Squadron (HSM-77) and the Captain became Squadron Operations Officer, where he again deployed.  In 2010 he was designated as the HSM-77 Officer of the Year.

In December 2010, Captain Sherman reported to the US Southern Command in Miami, Florida and began an assignment as a Lead Planner.  This was the Captain’s first non-flying assignment and because of the high-level security associated with the assignment for the Theater Campaign Plan, he could only do work in the office and not take it home.

The Captain became Executive Officer in May 2014 with HSM-72 “Proud Warriors” in Jacksonville, Florida.  As Executive Officer, the Captain was part of the leadership with a unit that had just transitioned to the MH-60R.  With past experience flying this aircraft, our speaker provided skills and experience for a unit build up for new duty as an Air Wing Squadron.  The Captain commented that with growing pains and new approaches, the squadron was able to complete its new role.  Air Wing preparation included an intensive period of training at Fallon.  Air Wing Fallon is the final or pre-deployment phase of training down on the Carrier to the desert as the CAG deploys to the carrier at sea.  Additional preparation included TSTA (Tailored Ship’s Training Availability), the final step of the basic phase of the Optimized Fleet Response Plan.  TSTA is unit-level training designed to prepare the ship, its crew and embarked air wing for full integration into a carrier strike group by measuring proficiency in a wide-range of mission-critical operation areas.  At the completion of unit preparation for deployment, under the Fleet Up Program, Captain Sherman assumed command in August 2015.  Under his command, the 308 member organization of HSM-72 deployed for the first time as an integrated Carrier Air Wing squadron with Carrier Air Wing SEVEN, and embarked in USS HARRY S. TRUMAN (CVN-75), with additional elements embarked in USS ANZIO (CG-68), USS BULKELEY (DDG-84) and USS GRAVELY (DDG-107), supporting Operation INHERENT RESOLVE. His “Proud Warrior” team earned multiple awards including the 2016 Battle Efficiency Award, 2016 Isabell Trophy, and the 2016 ADM “Jimmy” Thach Award.  When the eight-month deployment concluded, the Captain personally thank each member of his Squadron before assuming new duties.

Captain Sherman took on his new assignment in December 2016 when he reported to USS GEORGE WASHINGTON (CVN-73), homeported in Norfolk, VA as the Operations Officer and overall Habitability Production Lead during a Refueling Complex Overhaul (RCOH) maintenance availability.  The Captain was responsible for the short and long-term planning and execution of all operations on the George Washington.    He led six Habitability Production teams during the RCOH and was responsible for preparing 2500+ compartments and spaces for the Crew Move Aboard milestone, ensuring “hotel ready” services. 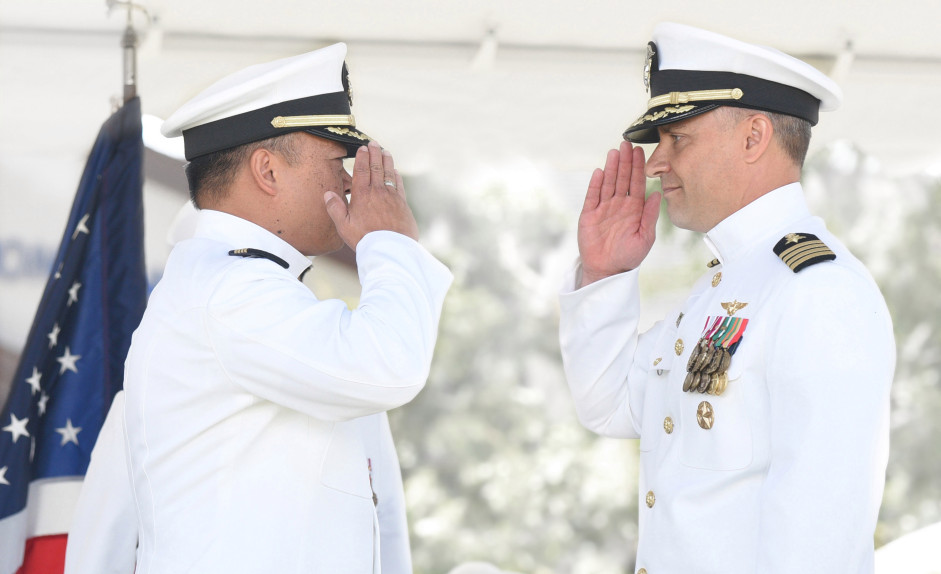 On July 26, 2019, Captain Jason Sherman assumed his latest command of both Naval Weapons Station Seal Beach and Navy Munitions Command Pacific, Continental United States (CONUS) West Division.  He is the first ever Naval Aviator to command the Naval Weapons Station.  His command includes the facility in Seal Beach as well as the detachment in Fallbrook, CA and Norco, CA.  Seal Beach is the primary West Coast hub of ordnance receipt, storage and delivery for the Pacific Fleet and is the only naval weapons station port within 1,000 miles of the fleet concentration in San Diego.  Operations will load and unload between 40-50 ships per year.  Storage capacity of the facility can house up to $5 Billion value in ordnance per year on the 5200 acre facility including a National Wildlife Refuge which is approximately one fifth of the naval weapons station property.

Grampaw Pettibone wishes to thank Captain Sherman for his presentation and wishes him calm seas and fair winds for his current assignment.